The publishing industry brings in nearly $26 billion in revenue in the United States every year.

Even though that number has been flat for the past four years, the industry has been experiencing some sizable shifts.

Many of the industry’s changes relate to e-books, audiobooks, and digital technology.

As publishers and consumers adjust their expectations in the coming years, which trends will be the most important?

Learn about six of the biggest publishing trends right here.

1. Demand Grows for Audiobooks and Ebooks

During the last 10 years, demand for print books has waned while audiobook and ebook popularity has grown.

Searches for audiobook platform “Audible” are on the rise.

Industry reports show that sales of audiobooks have seen continuous growth since 2012.

Ebook sales are soaring even higher in 2020. The same report shows that ebook sales have increased 16.5% over 2019, with more than $956 million in revenue.

For many independent authors, the ebook and audiobook trend is an untapped opportunity. 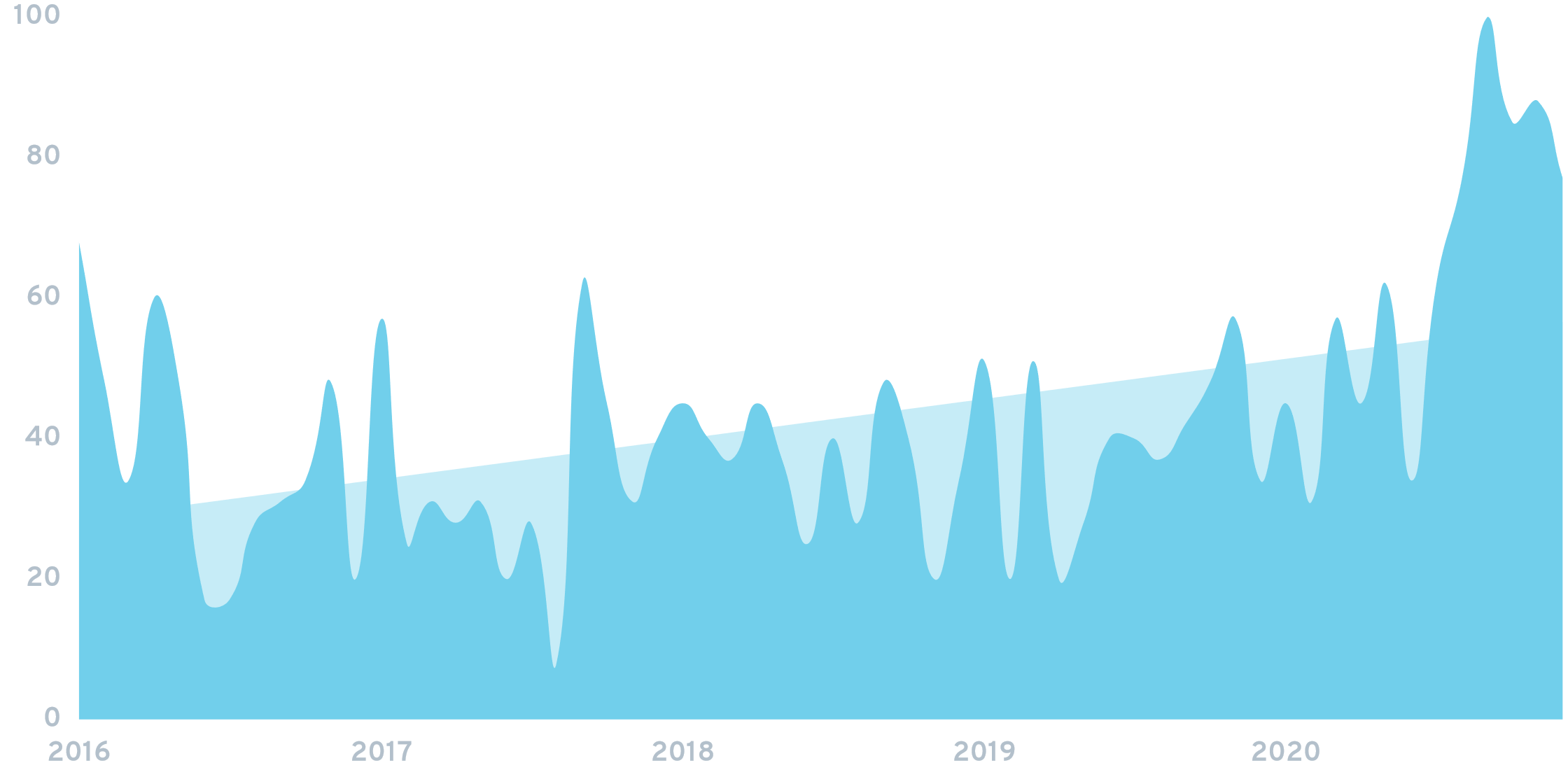 But, with tech developments in the publishing space, it’s getting easier to make it happen. Amazon’s subsidiary ACX will package an author’s audio file and list it on Amazon, Audible, and Apple iBooks.

Aside from Amazon, which controls nearly 50% of the ebook market and hosts 200k audiobooks on Audible, many consumers get their digital media from public libraries.

In 2019, the numbers reached record highs: 326 million pieces of digital content were downloaded—that was a 20% increase of 2018. In 2020, ebook checkouts from libraries soared even higher with a 52% increase year-over-year in spring 2020. 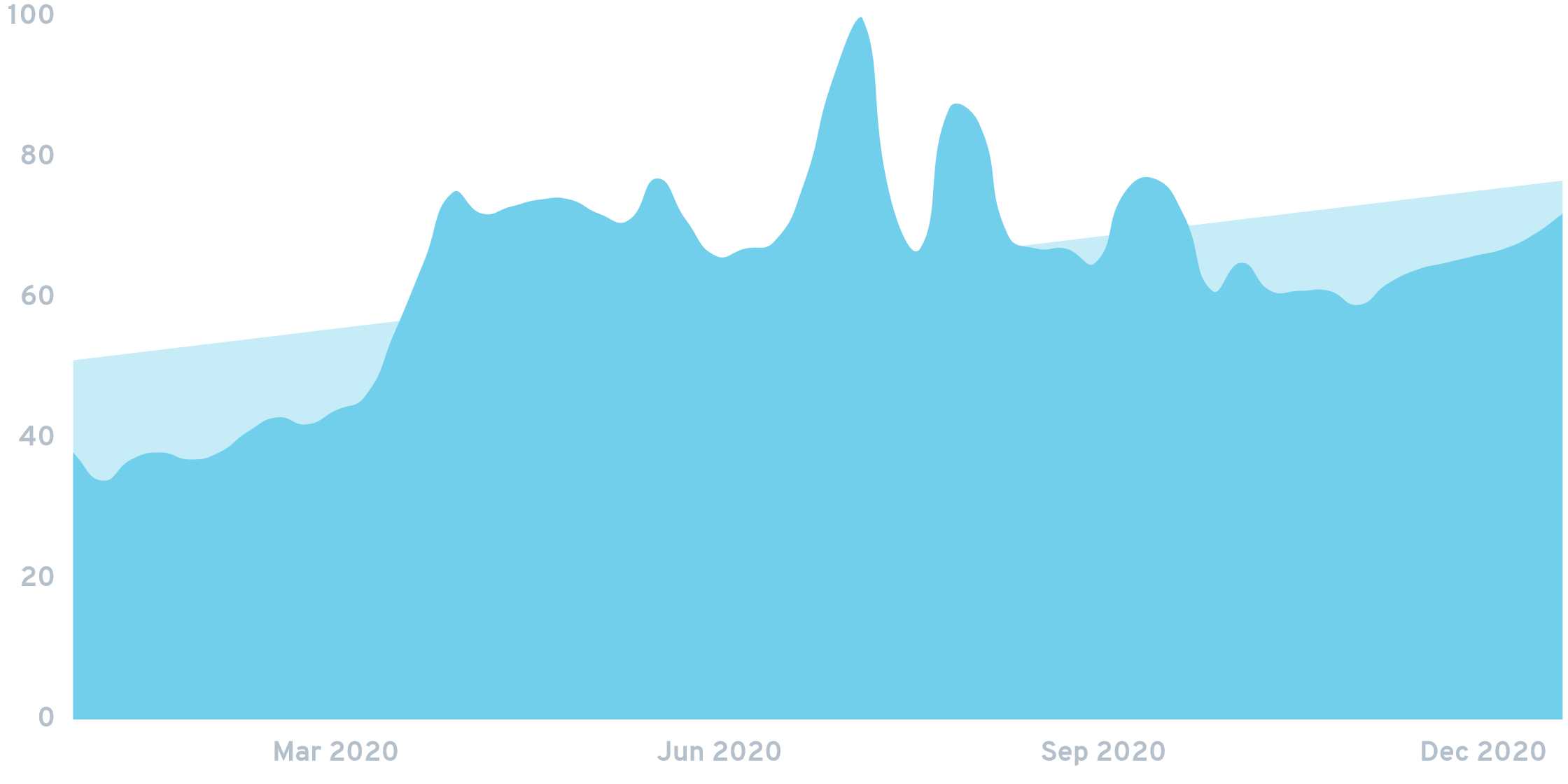 They’ve launched a reading app with AI narrators. And they recently invested $170 million in Zhangyue, one of China’s largest ebook publishers.

Blinkist, a Berlin-based startup with 7 million users, is one of the leaders in this growing space. 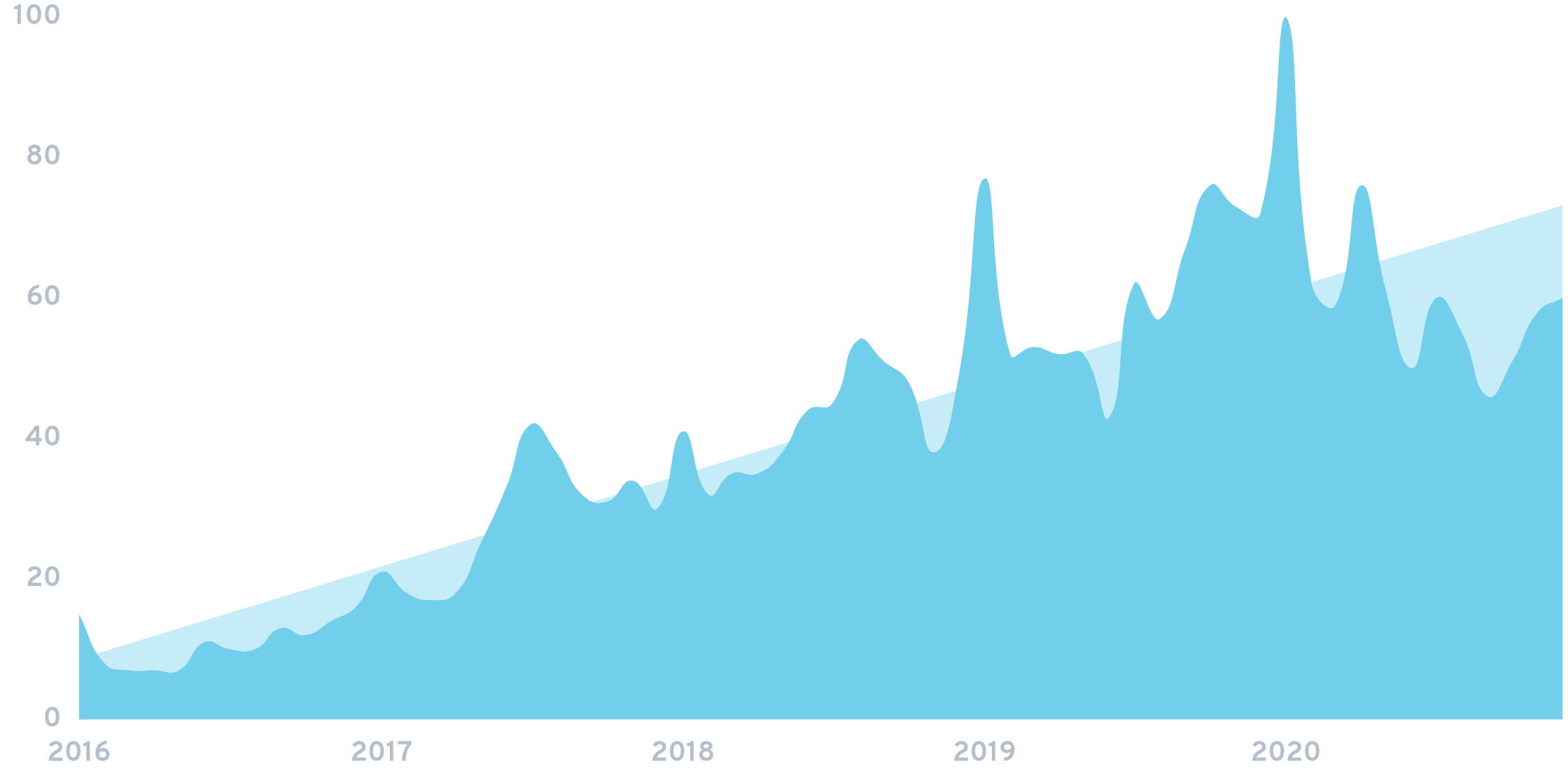 Searches for “Blinkist” over 5 years.

Blinkist summarizes books into audio and text summaries that they call “blinks”. And the startup has raised $34M in VC funding to date.

Another startup in this space is MentorBox. Instead of simply summarizing, MentorBox collaborates with authors to turn a book’s material into a course. Authors on the platform include Donald Miller, Jonah Berger and Reid Hoffman.

In recent years, books in the political genre have been immensely popular. And this trend is set to continue into 2021.

Publishing experts expect sales of the book to continue to rise, surpassing the sales of other recent presidential memoirs like Bill Clinton’s My Life and George W. Bush’s Decision Points.

Both of those books sold between 3.5 and 4 million copies total. Obama’s book is the first of two planned volumes—the release date for the second book has not been set yet.

Of course, books about President Donald Trump are also insanely popular. As of December 5, 2020, the 12 most popular books about Trump had sold more than 3.1 million physical copies.

Even after President Trump leaves office, the books will continue pouring out.

We already have a preview of what consumer demand might look like during the next four years of a Biden/Harris presidency.

Right after the 2020 election, four of the top 10 most popular books on Amazon were books written by or based on Kamala Harris.

The first books taking an in-depth look at her political career will be landing in early 2021. Simon & Schuster will be releasing Kamala’s Way on January 12.

Dozens of books about President-elect Joe Biden will be released in the next 12 months, too.

Prior books written by Biden have been popular with consumers. His most recent book, Promise Me, Dad, was a New York Times bestseller and sold more than 300,000 copies. Biden also earned $1.8 million from the 30-stop book tour.

The plight of the small bookstore continues into 2021, and the future looks very bleak.

Although independent bookstores recently rallied, reporting 49% growth from 2009 to 2018, the pandemic may be a hurdle that many of them simply cannot clear.

Nearly 60 small bookstores closed for good in 2020, and reports show that up to 20% of the remaining stores could close within the first months of 2021.

They simply cannot create the kind of revenue they did before COVID restrictions went into place.

Publisher’s Weekly reports that bookstore sales in the first 10 months of 2020 were down nearly one-third from last year. That’s a drop of more than $2 billion.

Local bookstores, like many small businesses, depend on holiday sales to get them to year-end in the black.

Some bookstores earn up to one-third of their entire annual revenue during the final months of the year.

Many small bookstores say their holiday season has been a bright spot in an otherwise tumultuous year.

With in-store occupancy limits, online sales have become a lifeline for many of these bookstores.

And ecommerce is challenging for bookstore owners who have never sold online and don’t have the logistical power to make it happen. But bookshop.org is stepping in to simplify things. 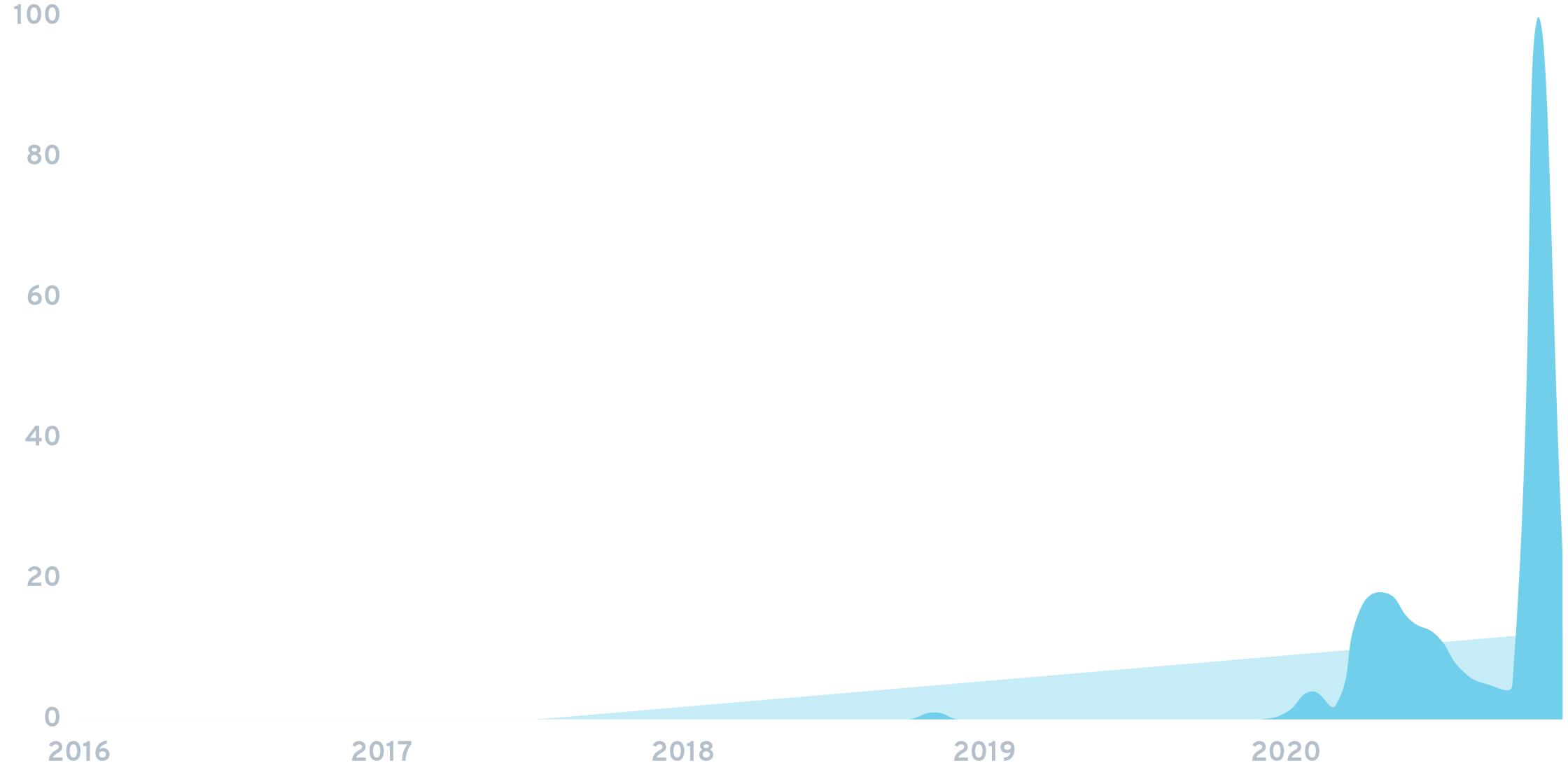 Searches for “bookshop.org” over 5 years.

Small bookstores can become affiliates of bookshop.org. That means that they can create a link to the Bookshop store and they’ll get 30% of the profit from the sales of people using that link.

Bookshop takes care of all the logistics—inventory, packing, shipping, and returns. T

his type of profit is similar to what bookstores would make on an in-store purchase. During the 2020 Black Friday weekend, Bookshop sold nearly $2.3 million in books.

Local communities are also doing their part to save the small bookstores they love so much.

5. Libraries At Odds with Publishers

As demand grows for digital media, libraries and publishers are locked in a duel.

Libraries advocate for the free flow of information, but publishers are worried about library checkouts cutting into their revenue.

This fight has been brewing for years. And has only been heightened by the pandemic.

In previous years, publishers have put limits on how libraries could offer their ebooks to patrons.

Often, they would allow libraries a certain lifetime for an ebook—for example, 2 years or 52 checkouts per ebook license.

But libraries have been paying an average of $45 per ebook, which is nearly 3.5 times more than the consumer price.

In late 2019, Macmillan, one of the “big five” publishing houses, created a new policy that would allow libraries only one copy of an ebook until it’d been on the market for two months.

Since Macmillian reports that 45% of their ebook reads are coming through libraries, they reportedly wanted to use this policy to see if they could push more sales. It did not last long, though.

Libraries protested and the publisher reversed course when COVID hit.

Libraries are concerned with Amazon’s ebook regulations, too.

The internet giant does not allow libraries to purchase any ebooks published under their imprints.

However, they have recently started negotiating a plan for library distribution with the Digital Public Library of America.

In addition, Rhode Island and New York have proposed legislation that would require publishers to make ebooks available to public libraries at fair prices.

The disagreements between the publishers and libraries still remain. Many in the public library system fear the fight over ebooks will be reignited once the pandemic is over.

Technology is going to be a key driver of change in the publishing industry in 2021 and beyond.

One unexpected way is that publishers are on the brink of using AI to write books.

Many news organizations are already using AI to write articles, but fiction doesn’t fare so well.

As the USC Annenberg Relevance Report put it, “AI is not ready to write a best-seller yet, [but] it is a powerful tool that can improve stories and increase audience engagement.”

So far, it’s easy for many to tell that a fiction book was written by a non-human.

But, taking into consideration that these AI programs have made huge gains in the past few years, and it may not be long before we see content that is much less robotic.

Publishers have other uses for AI, too. They are utilizing the technology for content classification, acquisitions, plagiarism checks, and book marketing.

The opportunities associated with digital marketing and promotion in the publishing world are seemingly endless.

First chapters are being read on live social media feeds, virtual literary events are drawing crowds of more than 500k people, and publishers are tracking consumer behavior and data like never before.

“Bookstagrammer” is a real thing on Instagram with more than 8 million posts under the hashtag. 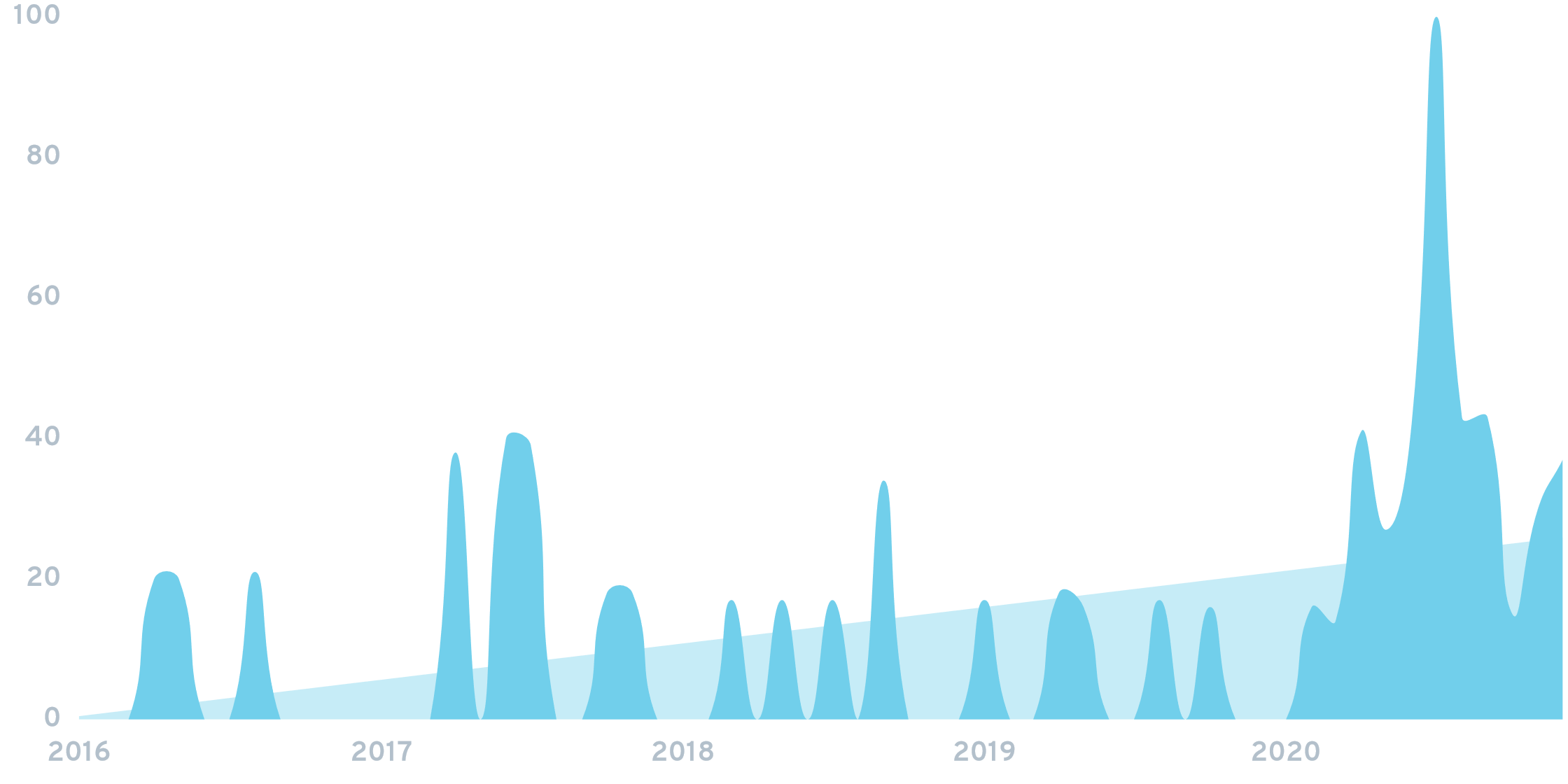 Searches for “Bookstagrammer” spiked in July 2020. But are still growing.

“Booktubers” have created an online community via YouTube and even attracted the attention of Michelle Obama as she marketed her memoir, Becoming.

Publishing is an industry that has constantly adapted to changing conditions ever since Gutenburg and the first printing press.

These five publishing trends are disrupting the industry. Despite that, the written word remains just as powerful today as it was in the 15th century.