See trends before they become trends
Trusted by 65,000 people
Insights, expert analysis, and more
Loved by over 65,000 people at companies like:

This list will cover the 5 most important food trends happening in 2021.

The $6.02 trillion U.S. food and beverage industry is due for a shakeup.

And it’s finally getting one: the food industry is investing in ecommerce, robotics and technology like never before.

So whether you’re in the food and beverage industry (or just cover the space), you should find some new niches, companies and categories to keep an eye on.

Food and beverage has always been one of the segments that was least impacted by ecommerce.

But in 2020, it’s the fastest-growing category in online retail. 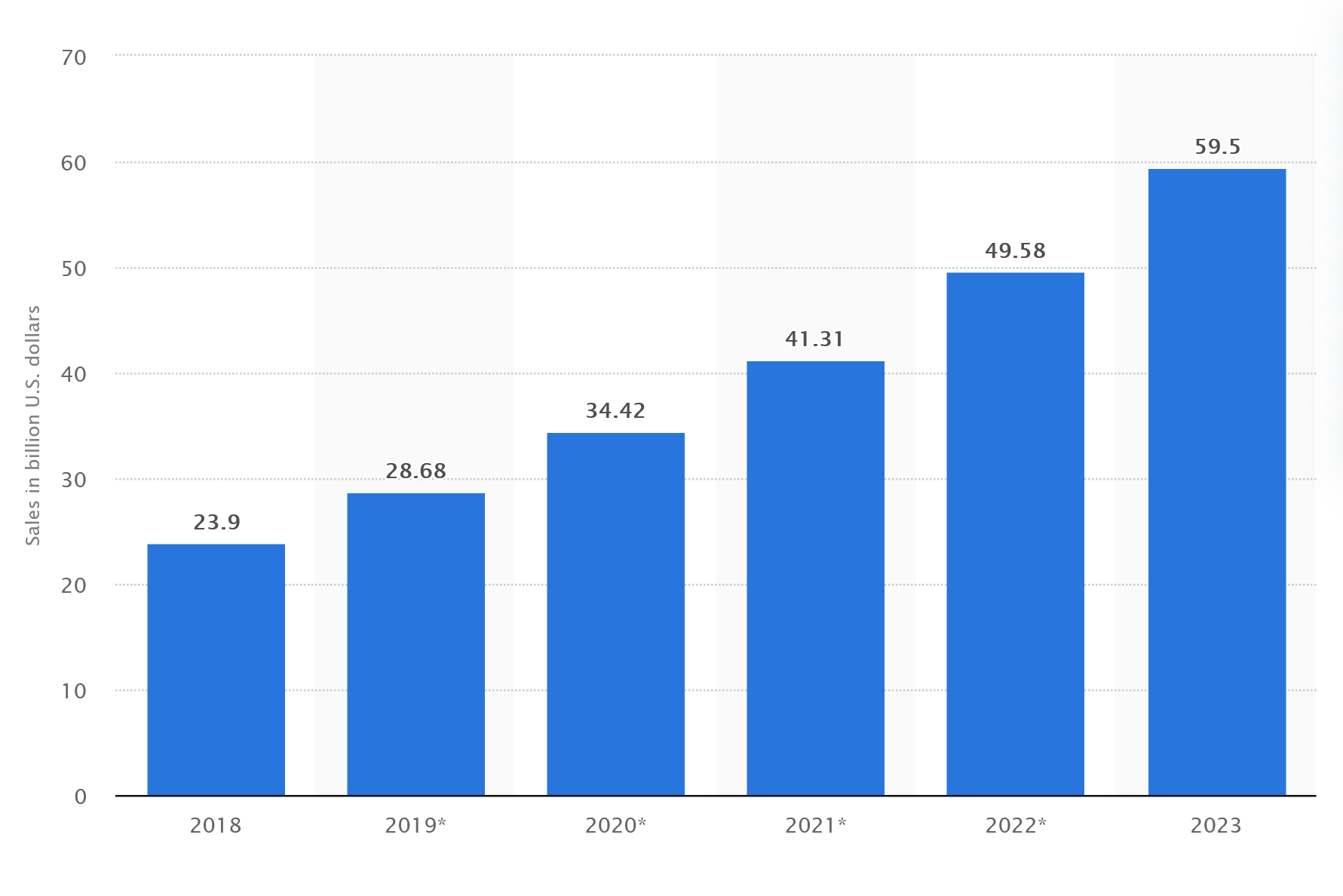 One reason is the COVID-19 pandemic.

To avoid the virus, many consumers ordered food online for the first time this year. In the US, this led to a 110% increase in daily online grocery sales in April alone.

But even before the pandemic, ecommerce food sales were growing quickly. Online grocery shopping more than doubled from 2015 to 2018.

The most exciting part of this movement is the DTC (direct-to-consumer) segment.

And because they control the customer relationship, DTC companies can easily test new products and make adjustments on the fly. 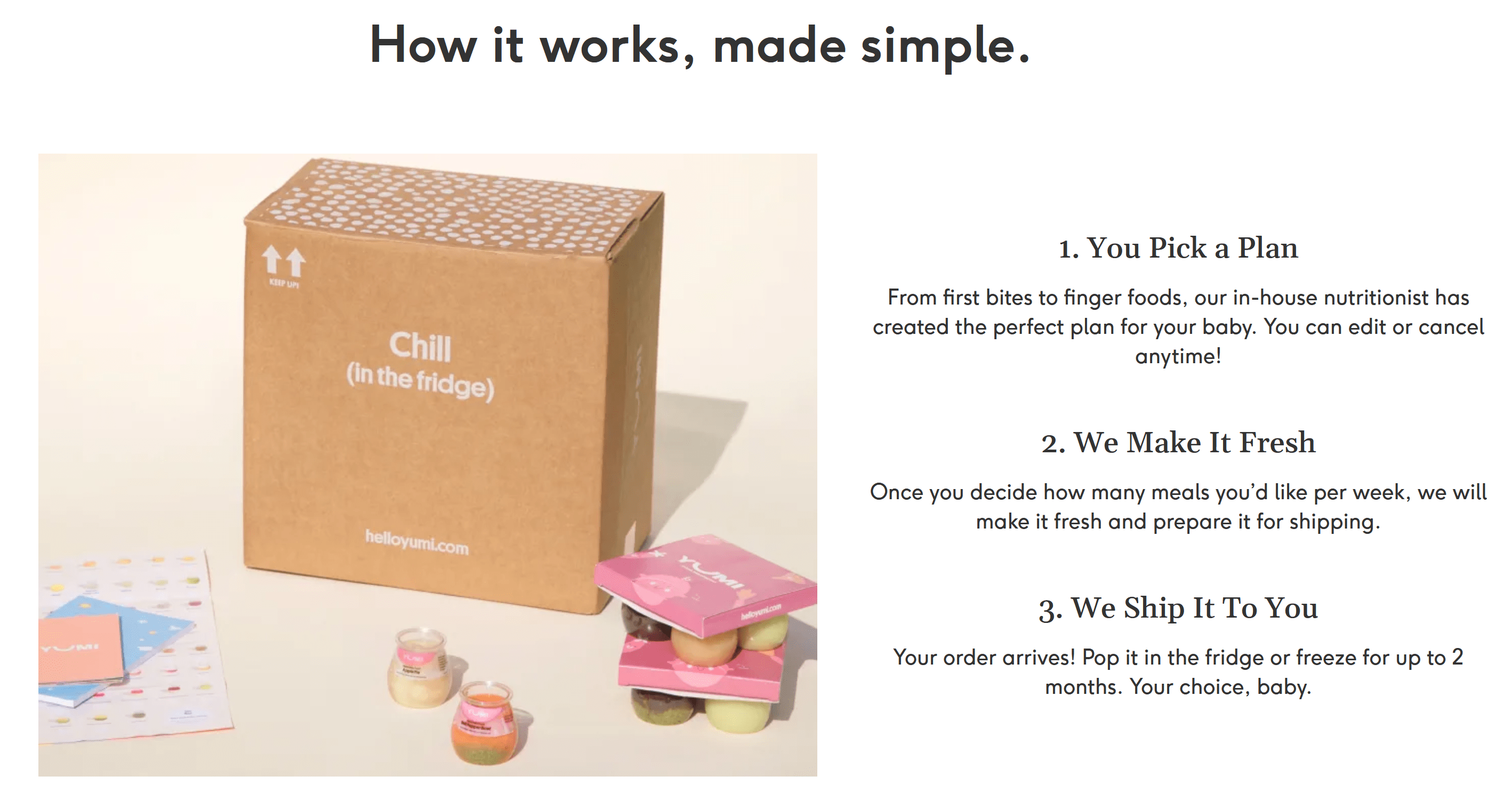 With all those benefits, it’s no surprise that the DTC model is popular with investors. 70% of CPG brands that receive VC funding have a DTC component.

Another common aspect of DTC food startups is a focus on underserved markets.

Strict diets are a perfect example.

This plant-based nutritional brand was started by champion surfer Laird Hamilton, and it’s landed $51M in funding since 2015.

Magic Spoon is another example.

Launched in 2019, Magic Spoon is a high-protein, low-carb breakfast cereal for adults. It caters to the ketogenic diet crowd.

Its founders say business has been booming. And judging by search volume for the brand, they’re not lying: 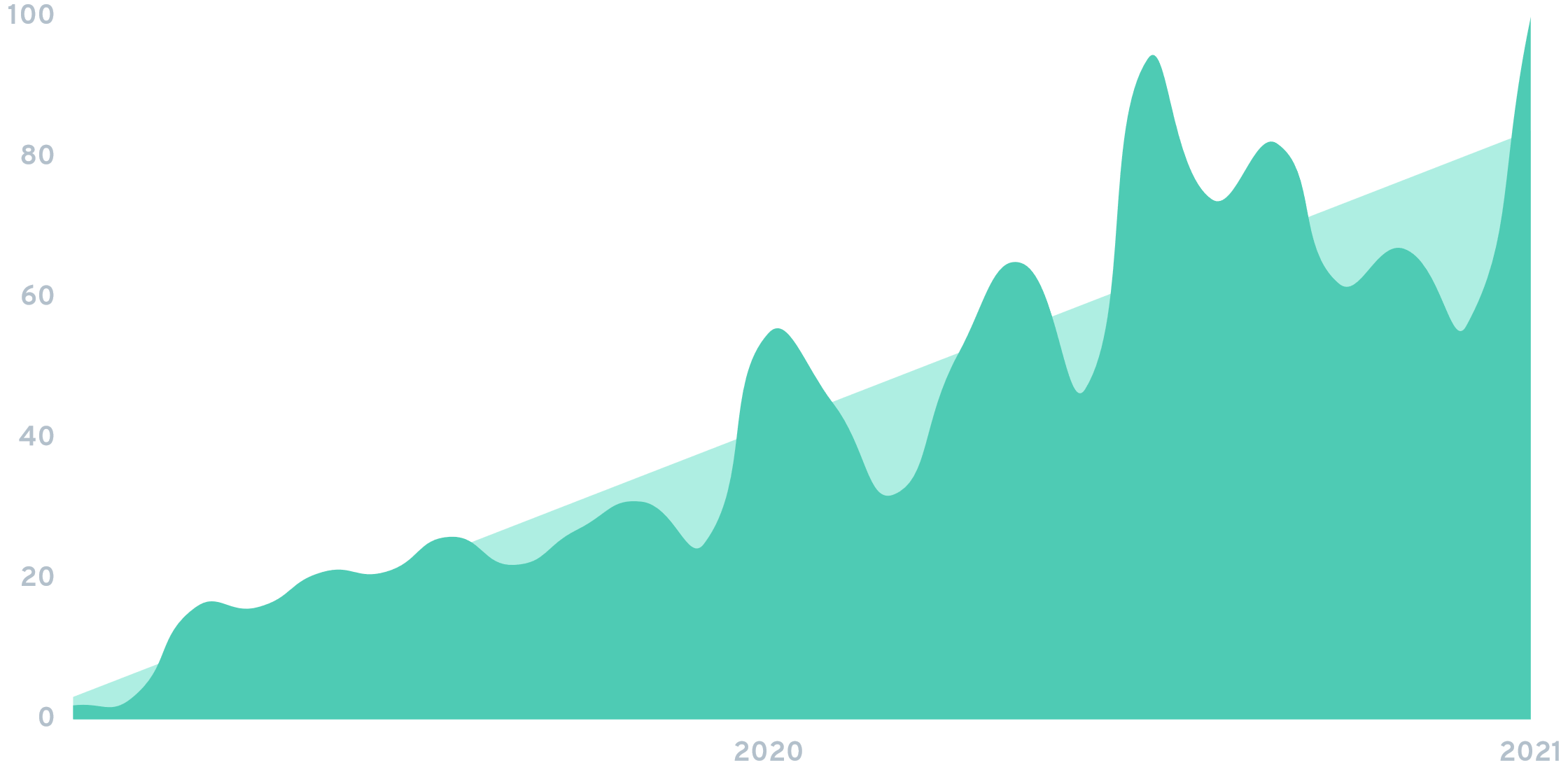 Search volume for “Magic Spoon” has more than tripled over the past two years.

Any given strict diet can be the perfect initial market for a DTC food business. Because it represents a clear, specific need. But one that’s too niche for the industry giants like Procter and Gamble to tackle.

Starting small is fine for a DTC startup. They’ll only have enough supply for a niche market anyway.

At first, that is.

Once they’ve established a strong foothold in the original niche market, DTC brands can expand into the mainstream.

At that point they become legitimate competitors -- making them prime acquisition targets. And for established CPG brands, acquiring DTC brands is now a large engine of growth.

Like the world of manufacturing, the food service space is starting to go all-in with robotics. 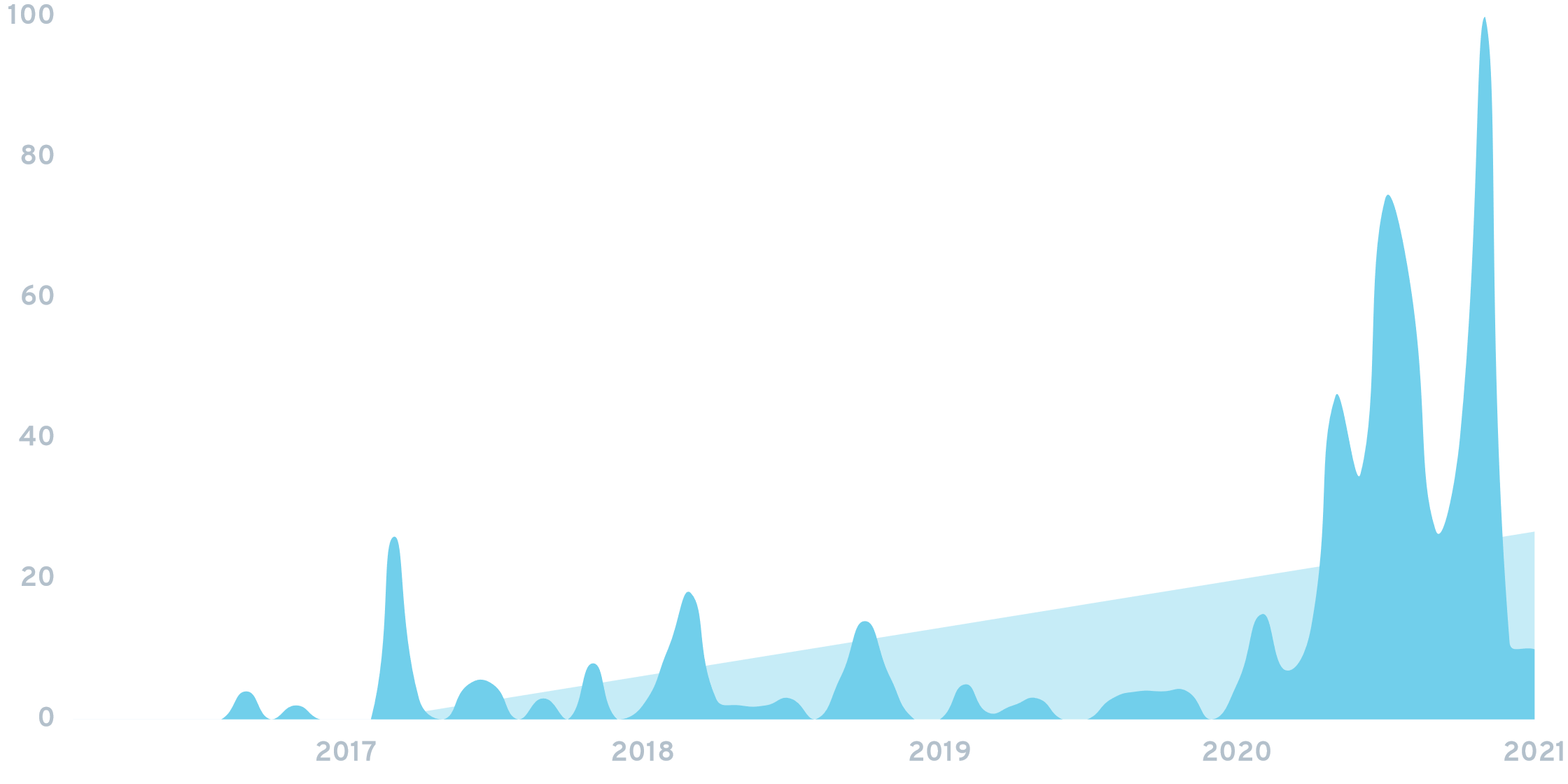 Searches for “Miso Robotics” since 2017.

More specifically, an autonomous robotic arm for use in commercial kitchens.

As of right now, Flippy has 2 specialties: flipping hamburgers and working the fryer. (It can work an entire grill or bank of fryers by itself, including cleanup and tool switching.)

But because it’s AI-powered, Flippy is always learning and improving -- and bound to pick up new skills over time.

Flippy has already been installed in locations like the LA Dodgers Stadium, Arizona Diamondbacks Chase Field and two CaliBurger restaurants. And last week, it was announced that fast-food chain White Castle would be trying it out too.

But Miso Robotics isn’t stopping there.

In the future, the company also plans to target the growing market of “ghost kitchens”, like Travis Kalanick’s CloudKitchens.

3. Vertical Farming on The Rise

At the same time, climate change is causing crop production losses and threatens even more in the future.

Luckily, thanks to AgTech, we’re now seeing the birth of a new era of sustainable food production.

Vertical farming is a major area within that space. 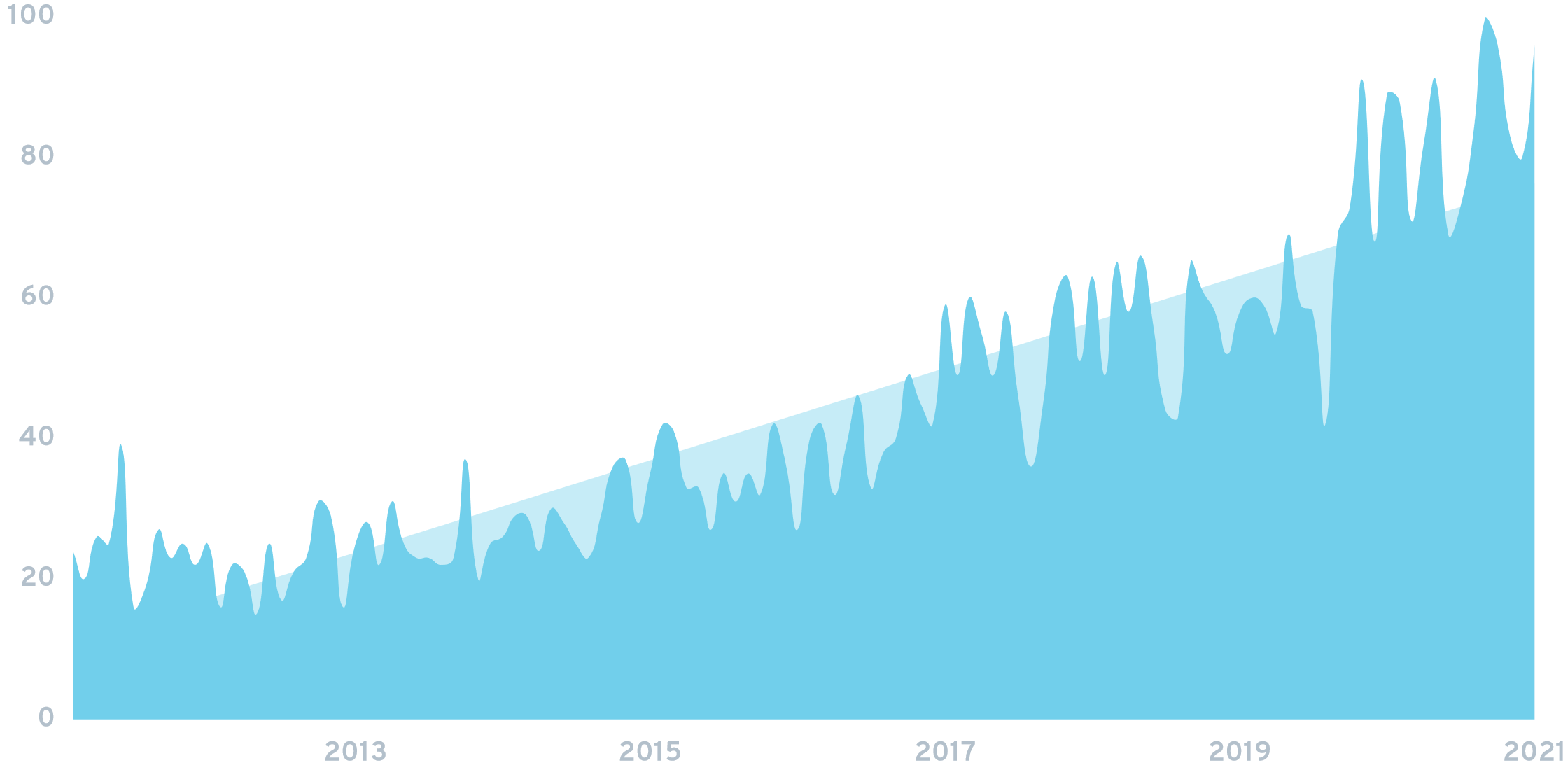 Search interest in “vertical farming” over the past decade.

The warehouses are carefully controlled for humidity, temperature, and light exposure so that the plants within them are grown as efficiently as possible. 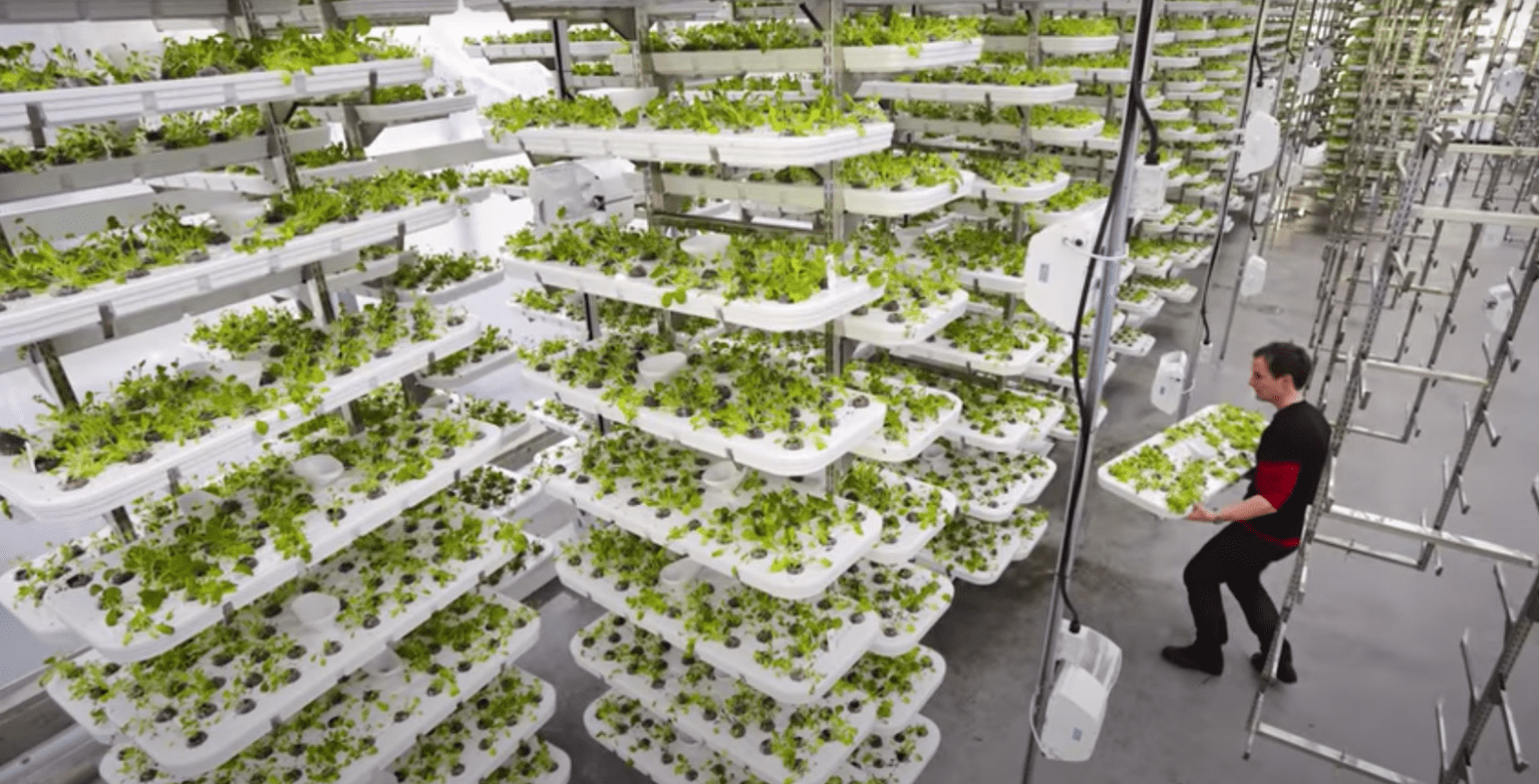 And the technology is getting cheaper, too. So much so that vertical farming is now viewed as a potential sustainable answer to the food shortages in Africa.

Software is eating the world. But soon, it may also be feeding it.

With a projected compound average growth rate of 23.5% from last year through 2026, the vertical farming industry is ripe with opportunity.

Some companies involved in vertical farming include:

AeroFarms, which runs the world’s largest vertical farm: a 70,000 square-foot facility that produces up to 2 million pounds of leafy greens per year. (They also recently announced plans to build an even larger vertical farm in Abu Dhabi for R&D purposes.)

Unfold, which was just launched this month with $30 million in funding from Bayer and Temasek, and which will focus on developing new produce varieties with biologies specifically suited for vertical farms.

Agricool, which uses shipping containers for urban farming in Paris. 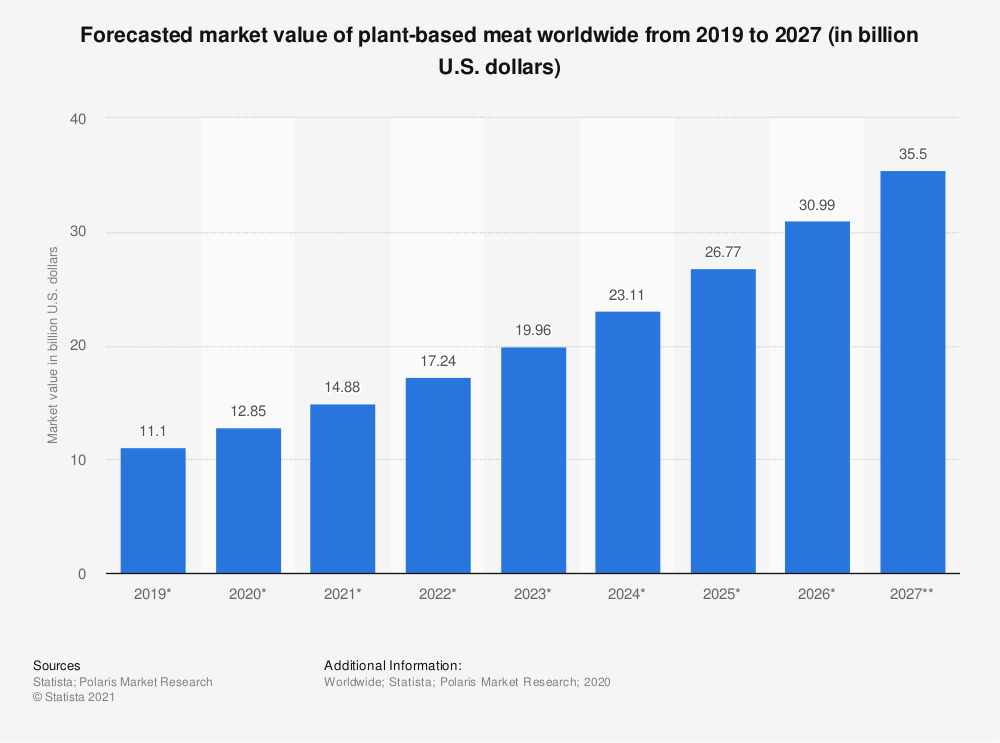 Those numbers may be impressive.

But in fact, most of the interest in plant-based or vegan food is actually coming from meat-eaters. According to a study by The NPD Group, about 90% of plant-based food consumers aren’t vegetarian or vegan.

One big reason for this popularity boost is because people are looking to improve their health. (43% of consumers consider “plant-based” products healthier.) Another reason is climate change, an issue Millennials and Gen Z are much more concerned about than older generations.

Veganization is also being propelled by grassroots movements. 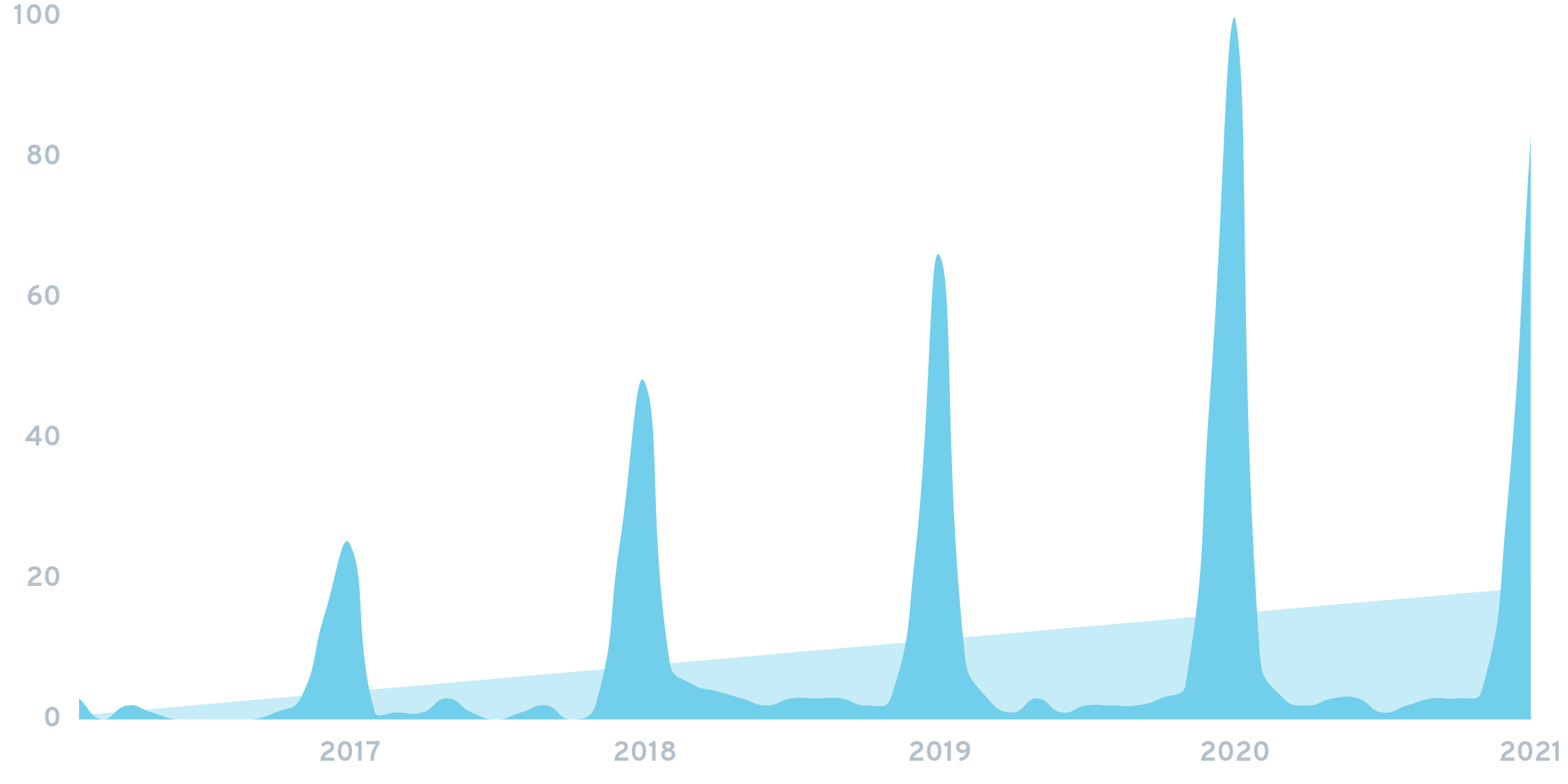 Some of the biggest brands in this space are Beyond Meat (with a $7.75B market cap as of this writing) and Impossible Foods (last valued around $4B earlier this year).

Those two brands of vegan meat have been served (at least in test markets) at KFC, Burger King, Carl’s Jr., Hardee’s and more.

But they have plenty of competitors -- big and small.

Like Nestle’s new “Vuna” vegan tuna (under the Garden Gourmet brand). As well as Field Roast and Yves.

Growing products in this category include: 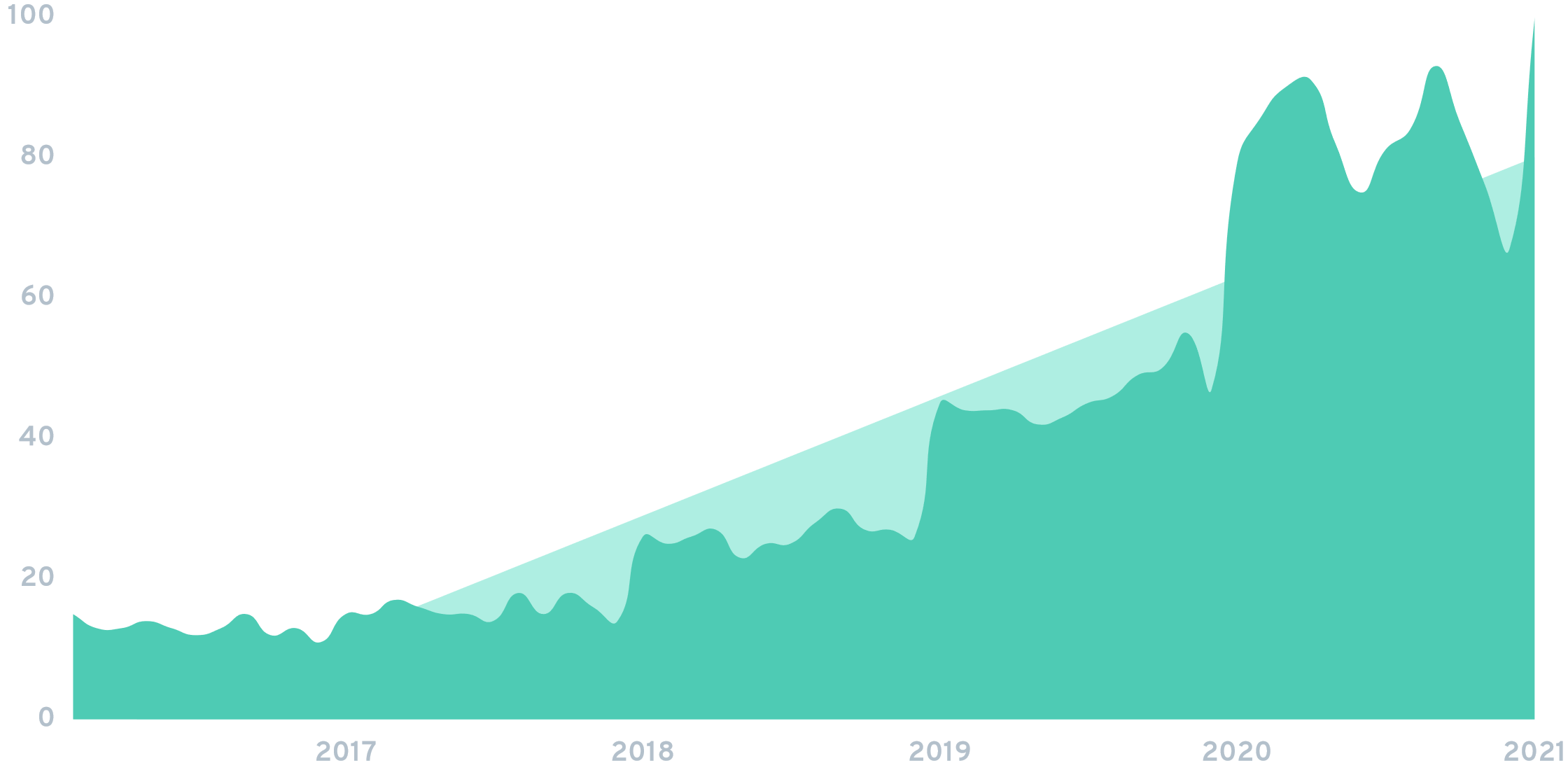 Searches for “oat milk” are climbing every year.

Almond Cow: a kitchen appliance that lets you make your own plant-based milk. 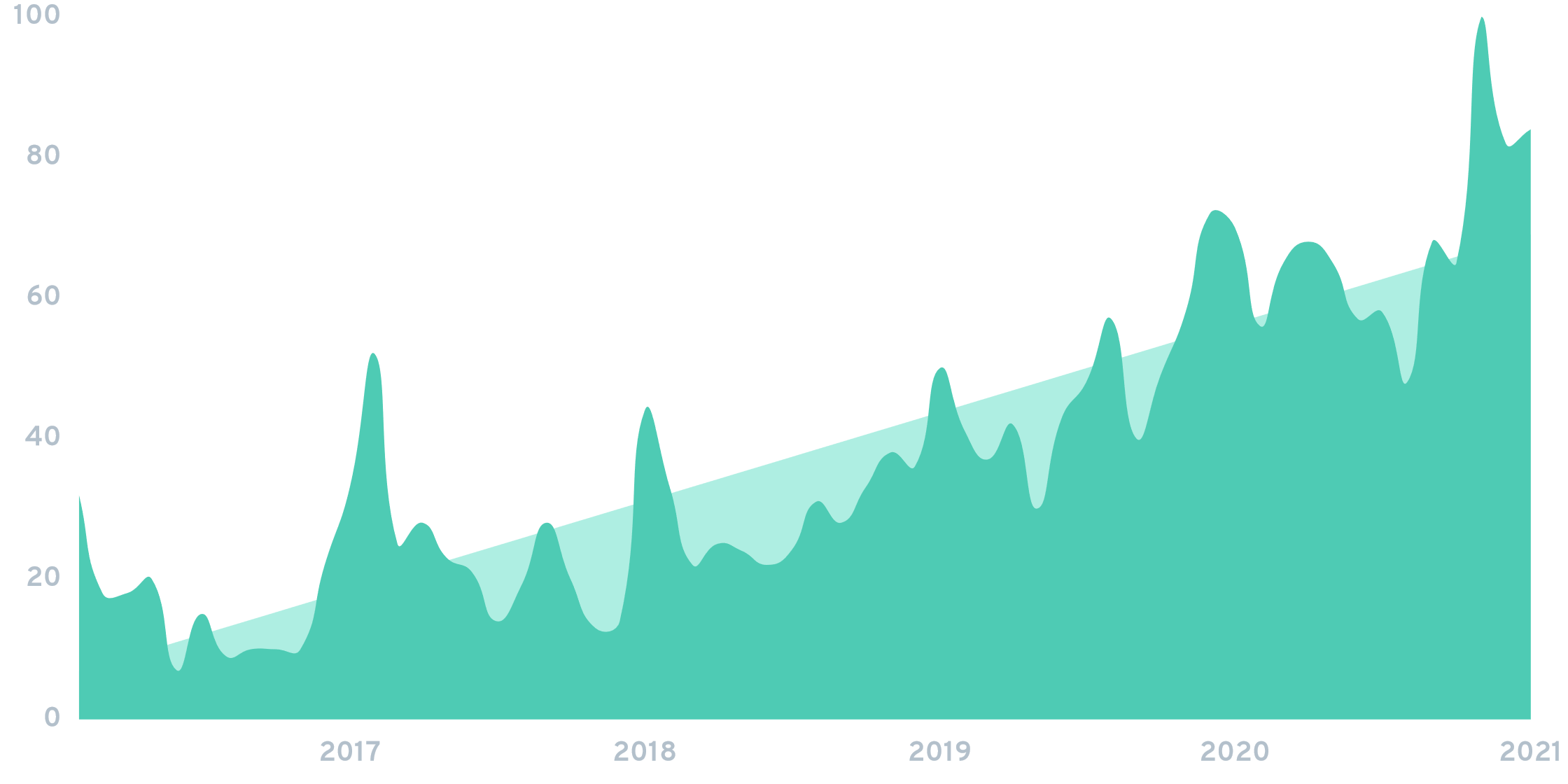 And vegan cheeses made by companies like tapioca-based Daiya, grain-based Field Roast, and almond-based Kite Hill (which has raised $75.5 million since being founded in 2010). 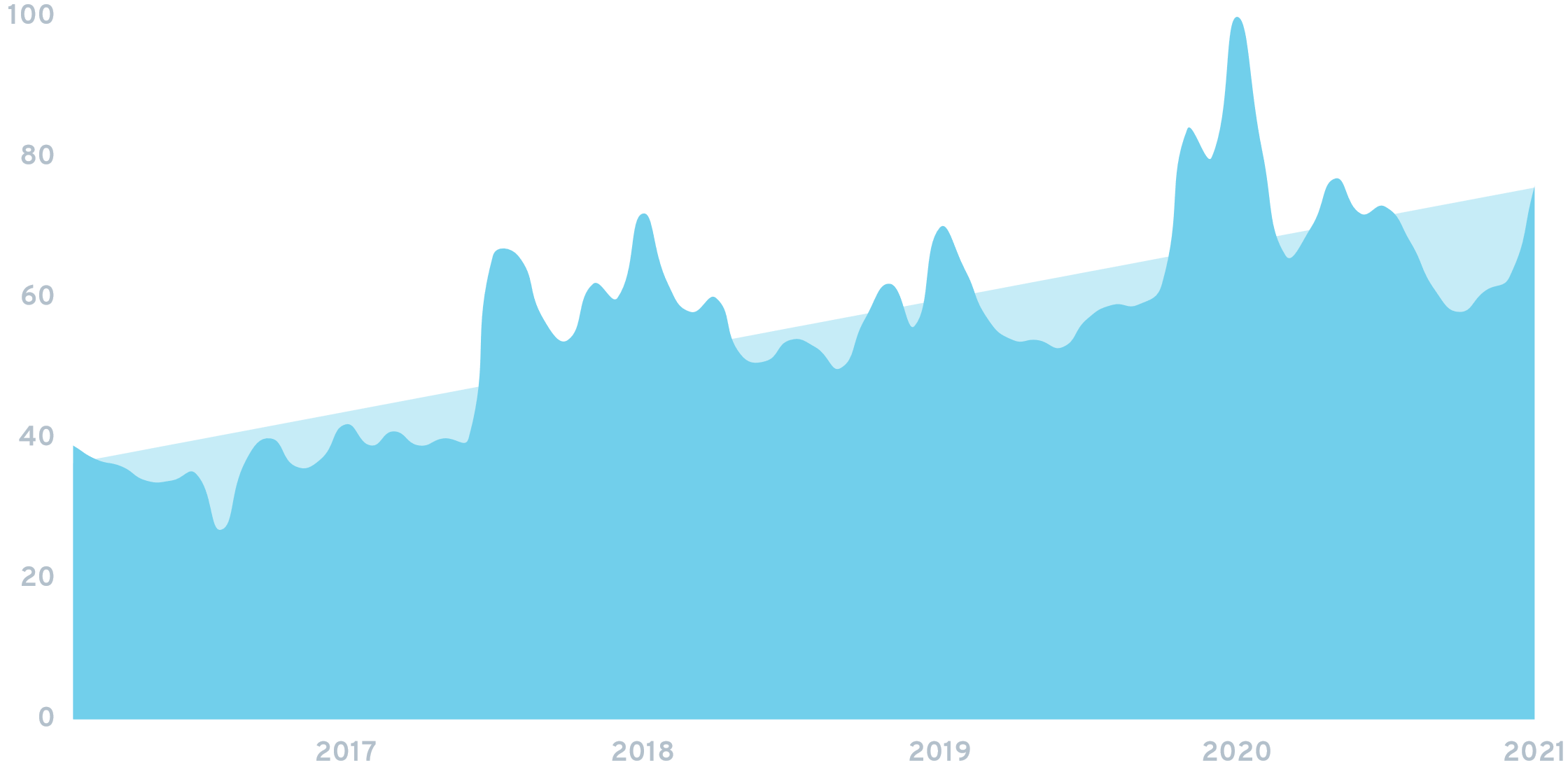 Alternatives to more niche products are taking off too, like mushroom jerky, vegan protein powder, and vegan collagen. 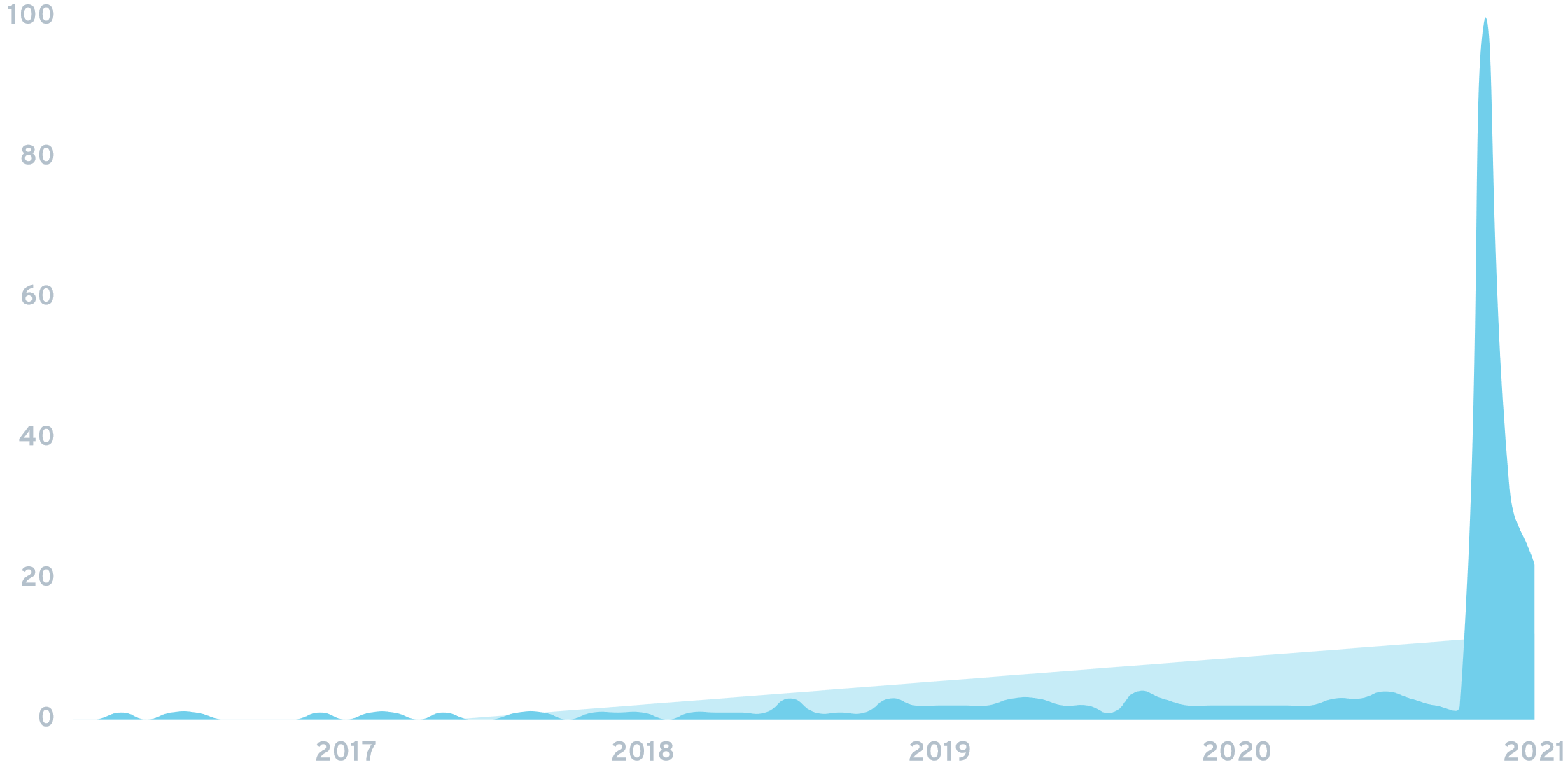 Searches for mushroom jerky have quintupled in 5 years.

Outside of food, sales of vegan and plant-based footwear, clothing and beauty products are also growing faster than their non-vegan rivals.

The worldwide smart kitchen appliances industry was worth $9.87 billion last year. And it’s expected to grow at a compound annual growth rate of 19.1% through 2027.

While WiFi or Bluetooth-enabled appliances were already growing before COVID-19, the pandemic has pushed interest higher. 54% of Americans say they’re cooking more now, and 51% of those say they’ll continue to do so even after the pandemic ends.

In the U.S. the three largest segments of connected kitchens are smart refrigerators, smart ovens, and smart cookware and cooktops. However, smart dishwashers are also projected to grow quickly.

There are also a number of other smart kitchen gadgets. 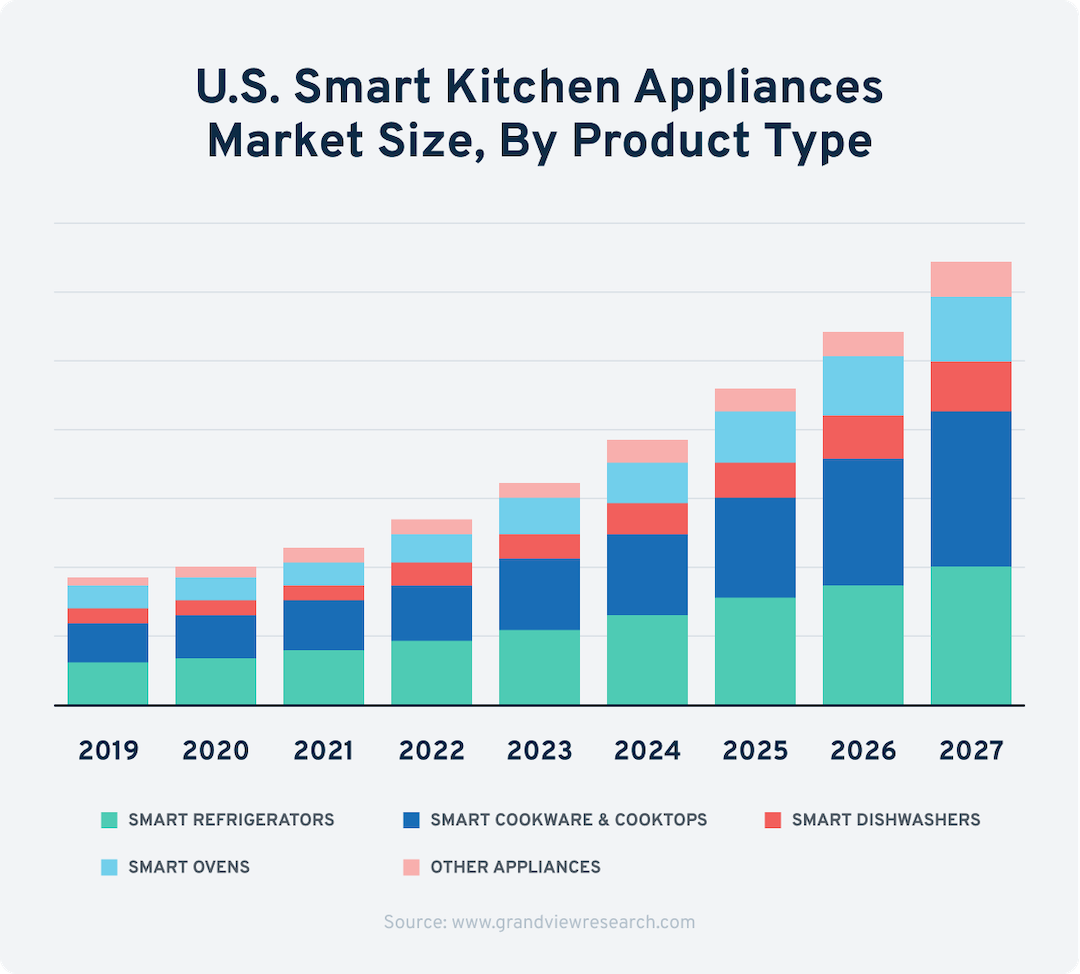 Most smart fridges have WiFi, and many can ping your phone if the door has been left open or the water filter needs replacing.

Some have touch screens for making notes and lists, ordering groceries, playing music and even looking inside via interior cameras. 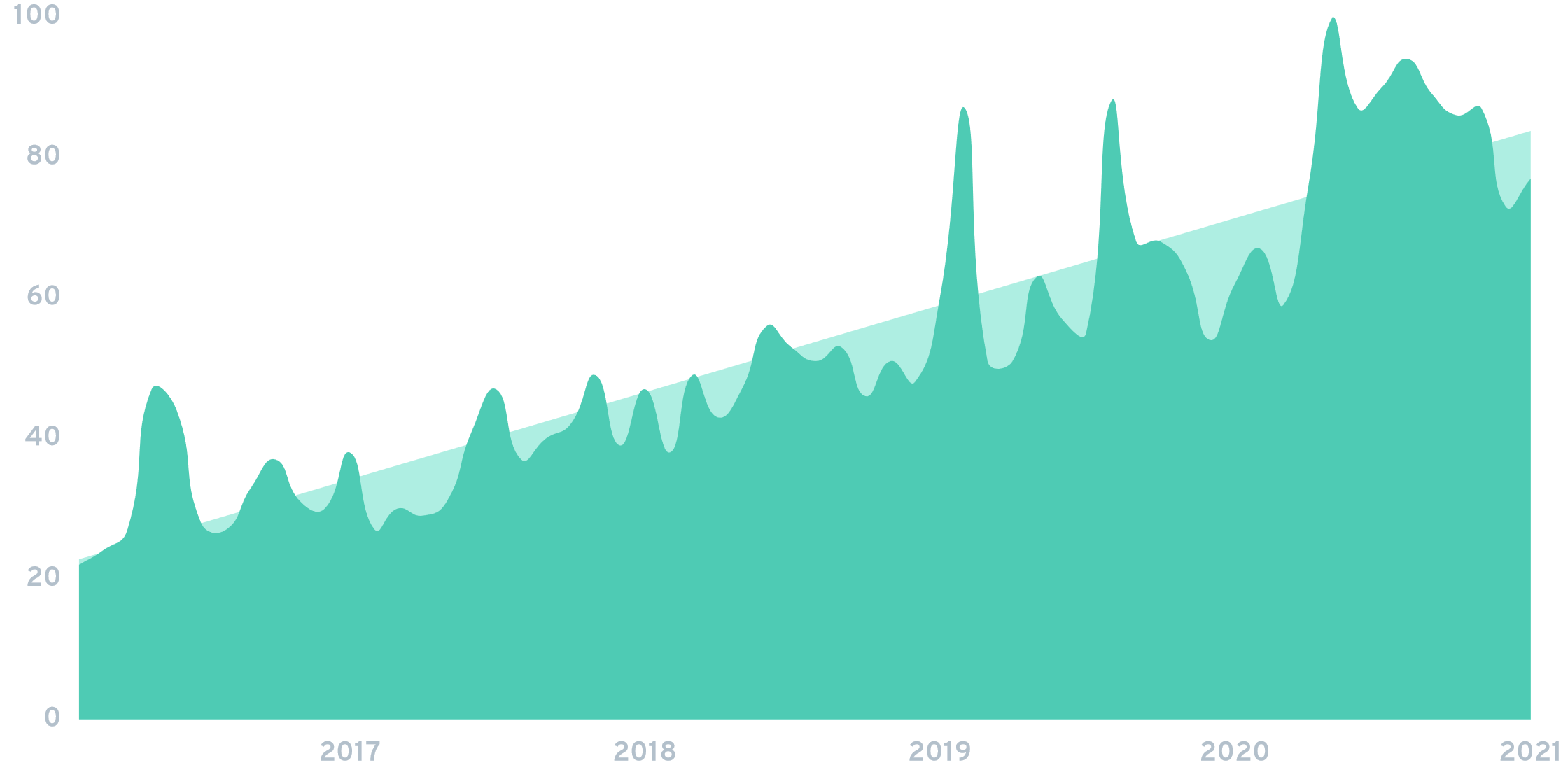 Search interest in smart refrigerators has been growing for years.

Full-size smart ovens usually come as part of a full range with a stovetop. They commonly include features like voice control, package barcode scanning for premade meals (to load cooking time and temperature), finer temperature control or multiple temperature zones, moisture sensors, and companion apps to let you control and monitor what they’re doing from anywhere.

Some smart ovens also integrate with recipe apps and adjust themselves based on what the recipe calls for.

Whirlpool and its subsidiary KitchenAid have models that work with Yummly, which it acquired in 2017. GE, LG, Bosch, Thermador, Siemens and others work with SideChef. While LG, Electrolux and GE integrate with Innit.

There are also smart countertop ovens. These are smaller: usually around 15 - 25 inches wide.

But they pack in multiple functions like convection baking, air frying, and sometimes steaming and microwaving. And they often cost much less: usually around $200 - $600.

Unlike the other appliances we’ve covered so far, non-traditional brands lead the smart countertop oven category.

But many of the names in this space aren’t as well-known.

Like Tovala, which pairs a smart countertop oven with a weekly meal delivery service. Tovala has also partnered with LG to have the larger company’s smart ovens detect meals from its meal service. As well as with Beyond Meat, to include the vegan meat in some of Tovala’s meals.

Tovala has even partnered with rival food brands like Eggo, Bagel Bites, Amy’s and Trader Joe’s so that its ovens can easily cook those brands’ products based on their labels.

The Chicago-based startup has taken $38.6M in funding since it started in 2015, including a $20M Series B four months ago. 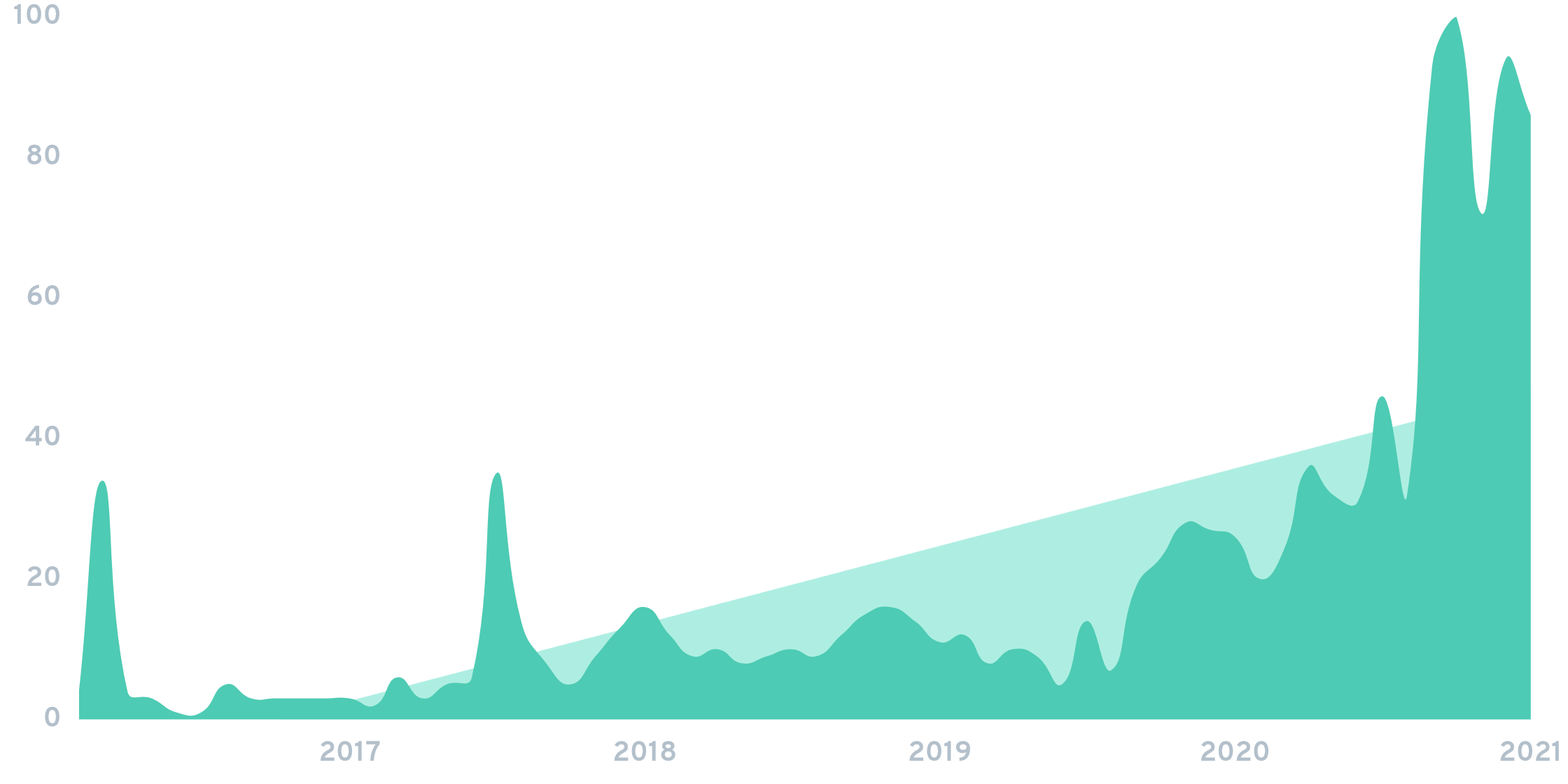 Searches for Tovala over time.

Brava offers an optional paid membership program called Brava Plus, which includes guided recipes and a chef support line. The startup was acquired by Middleby last year for an undisclosed sum.

June sells a smart oven for $499 that includes a built-in camera meant to identify different ingredients in order to cook them automatically. The startup behind it was founded in San Francisco in 2013, and has taken $29.5M in funding since then.

At each step of a given recipe, the burner adjusts the temperature as needed. While the pan communicates with the burner so it knows when and if to tweak the settings to keep the temperature right. (The Californian startup has also designed similar tech for GE’s Café brand.)

Samsung’s smart cooktops can pair with its hoods, turning the fan on automatically when the cooktop is in use.

BuzzFeed has partnered with Cuisinart to make the Tasty One Top, a smart induction burner that works with BuzzFeed’s Tasty app.

SmartyPans doesn’t sell a cooktop, but does sell smart pans. With the companion app, the pans can weigh ingredients and walk users through food prep. The startup has raised $1.3M since it was founded in 2015.

For smart dishwasher brands, many of the same big names are back again.

The most basic smart dishwasher function is showing your cycle status in an app, and letting you lock and unlock the controls from your phone.

But more interestingly, smart dishwashers from LG, GE, Whirlpool and Kenmore can automatically reorder detergent from Amazon when you run low.

Other smart kitchen companies and products include:

Drop, which makes a smart scale and a recipes app that’s focused on integrations. The Dublin-based startup has partnerships with Bosch, Electrolux, GE, Instant Pot, Kenwood and Thermomix. And it raised a $13.3M Series A earlier this year.

Meater, a smart wireless meat thermometer that originally launched on Kickstarter last year. The product is made by UK-based Apption Labs. 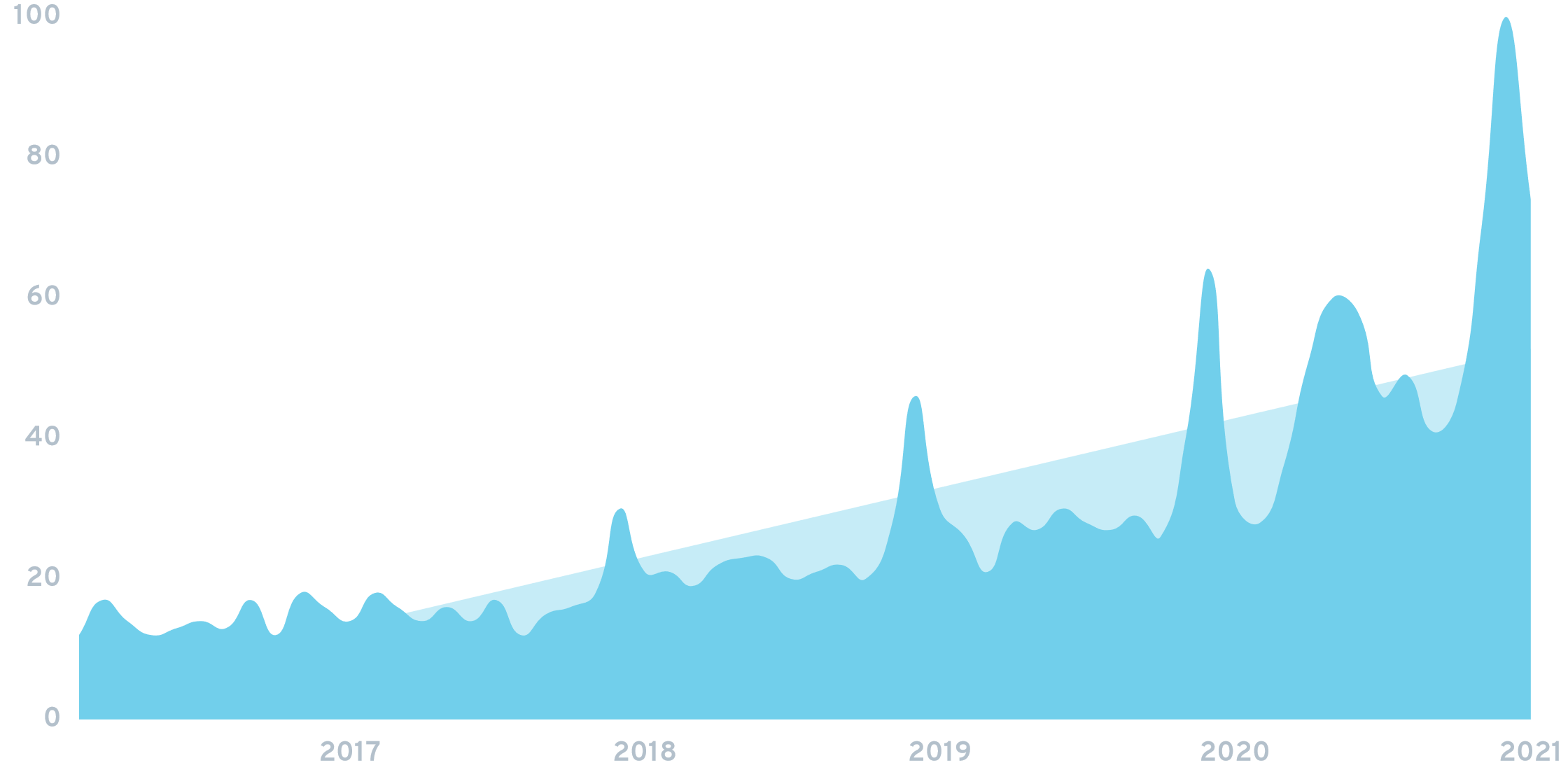 Searches for the Meater smart thermometer have been increasing rapidly. 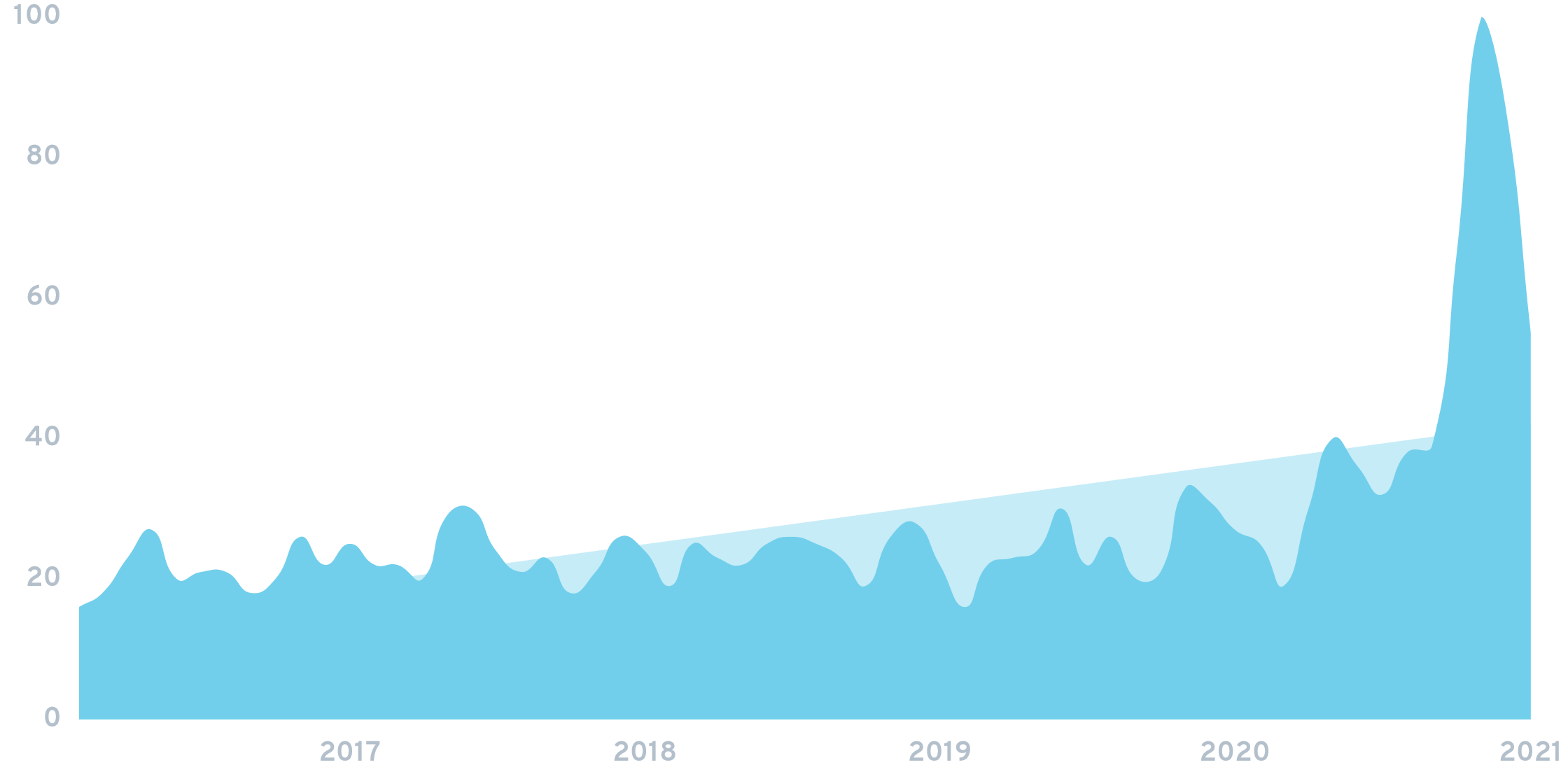 Searches for “smart grill” over time.

That wraps up our list of trends impacting the food and beverage space right now.

As we discover new food trends, we’ll add them to this list.

So please check back regularly to see what we’ve discovered.