See trends before they become trends
Trusted by 65,000 people
Insights, expert analysis, and more
Loved by over 65,000 people at companies like:

The U.S. healthcare industry was worth an estimated $808 billion last year.

While in some ways healthcare is a slow-moving industry. In many other ways, it's poised for disruption.

And in several cases, that disruption is already well underway.

In this guide, you'll see 8 of the biggest healthcare trends and opportunities to watch for in 2021 and beyond.

Along with examples of companies that are already taking advantage.

Healthcare is no exception.

Searches for "AI and healthcare" since 2012.

One example of this trend is Your.MD. 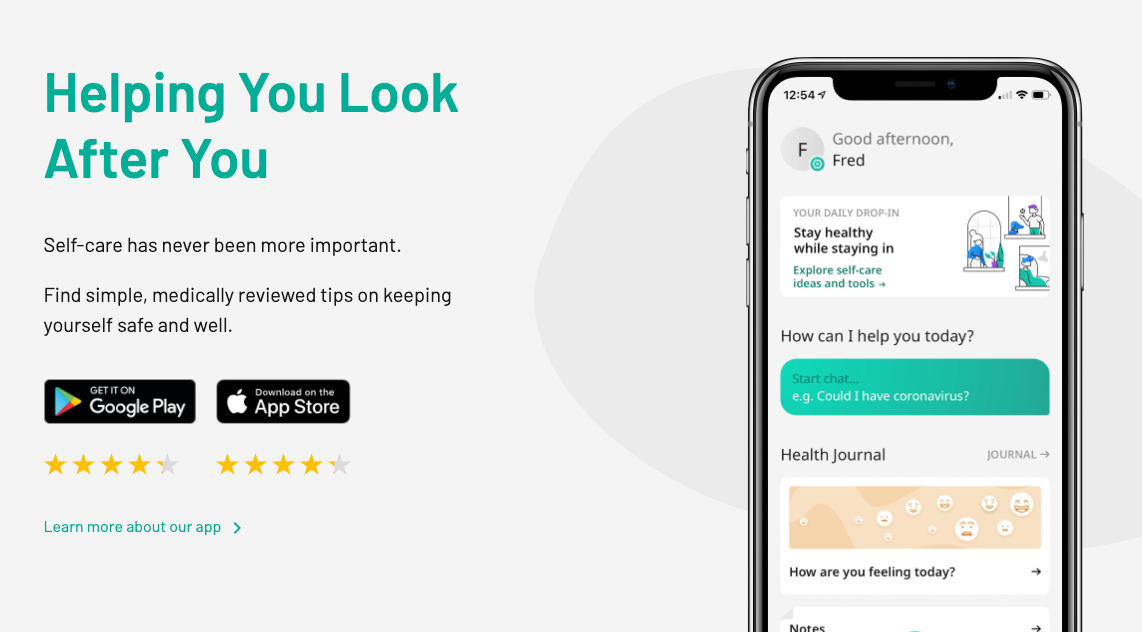 Founded in 2012, this medtech startup has secured $47.3 million in funding to date.

This allows people to check their own symptoms and get better medical tips than a simple Google search would offer.

Another example of consumers using healthcare AI is Alivecor.

Often in the form of augmented intelligence.

According to the American Medical Association, "augmented intelligence" is the concept of using artificial intelligence for assistive purposes.

In other words: to enhance the intelligence of clinicians - not to replace it. 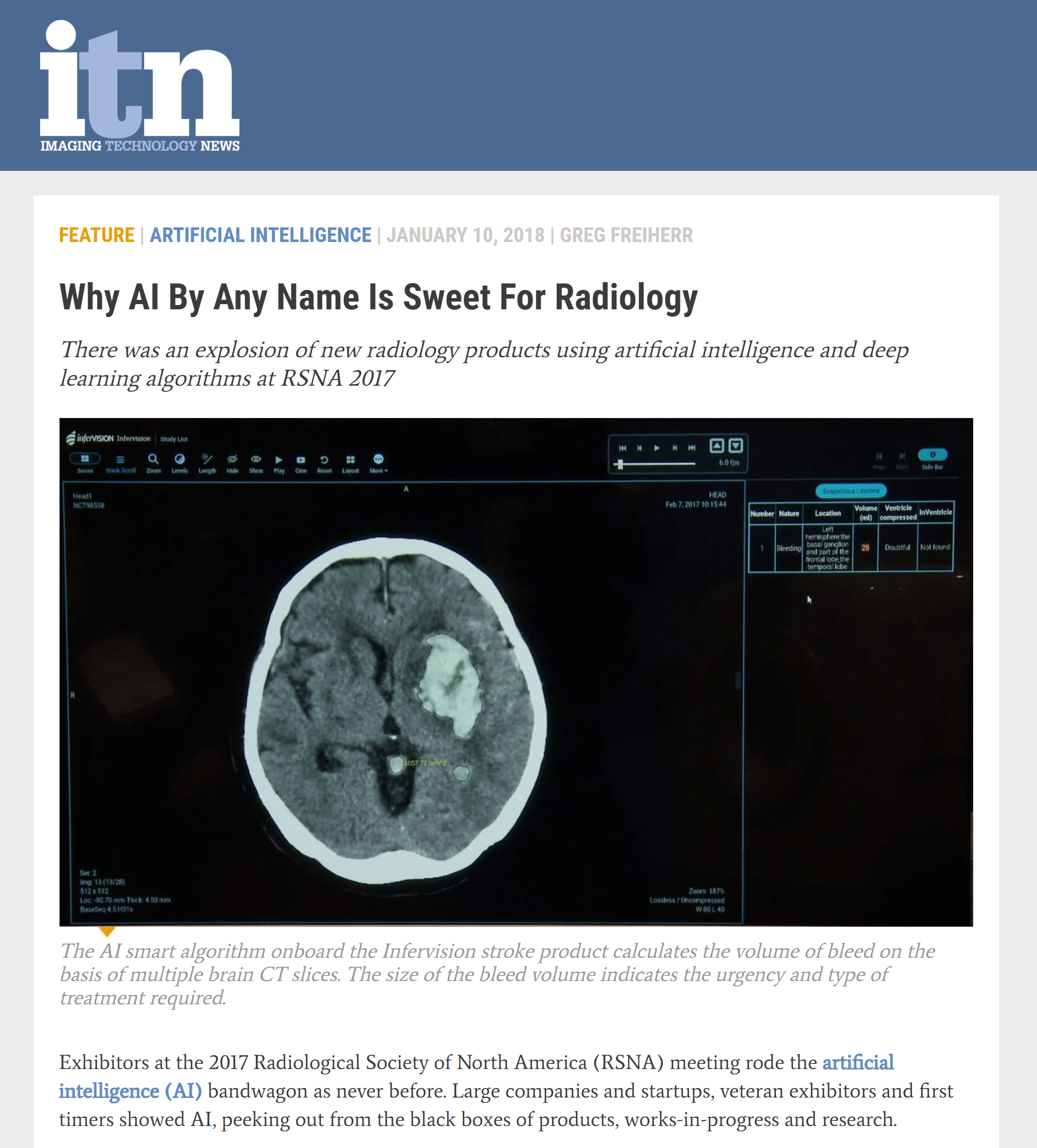 Example of AI being used in radiology.

The startup raised $27 million in Series B funding to grow its technology and go-to-market team, citing high demand for its solutions.

Overall, the global market for AI-enabled medical imaging solutions is projected to rise from $404 million in 2018 to $9.61 billion in 2029.

Personalized healthcare (PHC) is all about customizing medical treatment for an individual patient's needs.

As Cleveland Clinic puts it, this includes "genetics and genomics but also includes any other biologic information that helps predict risk for disease or how a patient will respond to treatments.”

This allows for the use of precision medicine, which can both improve health outcomes and decrease costs.

Why is PHC such a fast-growing healthcare trend?

New genetic testing products are one major reason. And they're at a lower price than ever.

23andMe used to sell their DNA testing kits for $999 each.

And now, thanks to economies of scale and streamlined supply chains, anyone can buy one of their kits for under $100.

Search growth for "23andMe" has dipped since 2019. But searches are still relatively high.

In fact, there is now a wide variety of personal DNA kits on the market, some available on Amazon for under $60.

And while 23andMe has reported declining sales, it probably has more to do with such kits becoming a commodity than with any lack of interest in the product.

In fact, the number of monthly Google searches for the phrase "DNA kit" has risen 46% over the past 5 years. 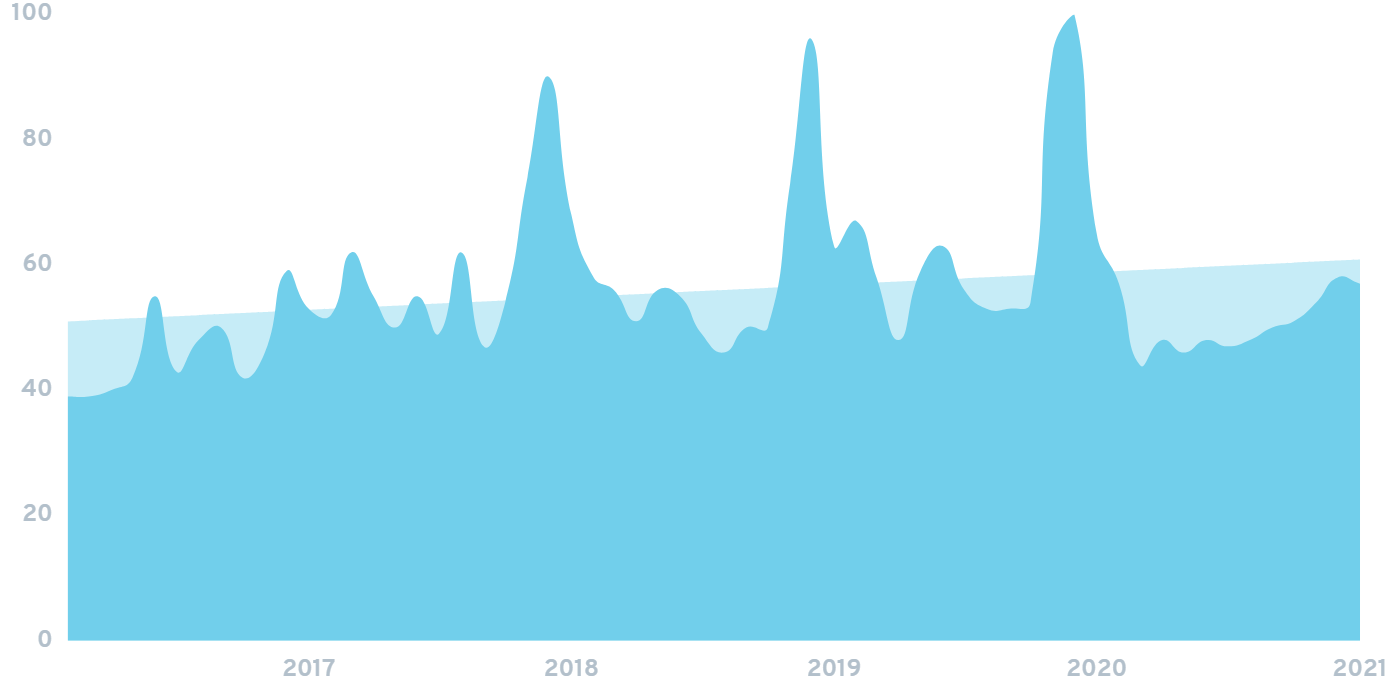 DNA kits didn't get a big Christmas boost this year. But the search term is still trending upwards.

Beyond DNA, many other types of home testing kits are also now available. 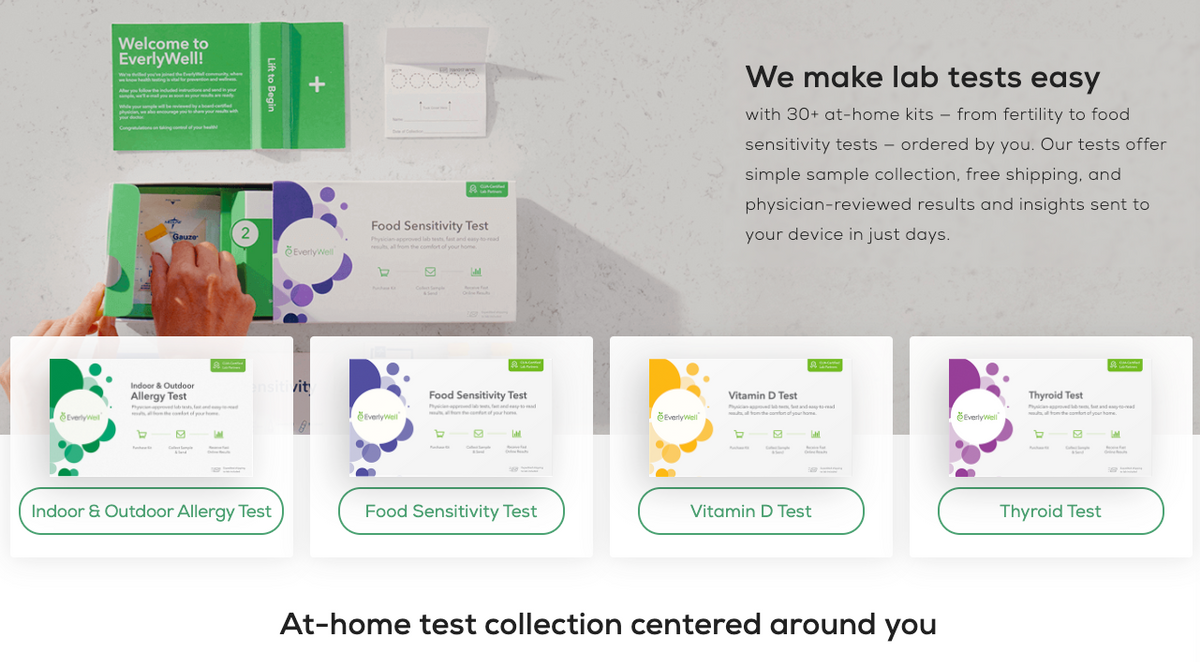 Everywell is growing quickly, with searches for the brand name more than doubling in the past two years.

A separate factor that's helping drive personalized healthcare forward is the number of wearable devices consumers are using to monitor their health and habits.

This brings us to the next healthcare trend on our list.

Wearable devices are increasingly overlapping with the medical field.

Oura, the maker of the popular Oura Ring wearable fitness tracker, collaborated with UCSF on a study to try to detect early signs of COVID-19 during the early days of the pandemic. 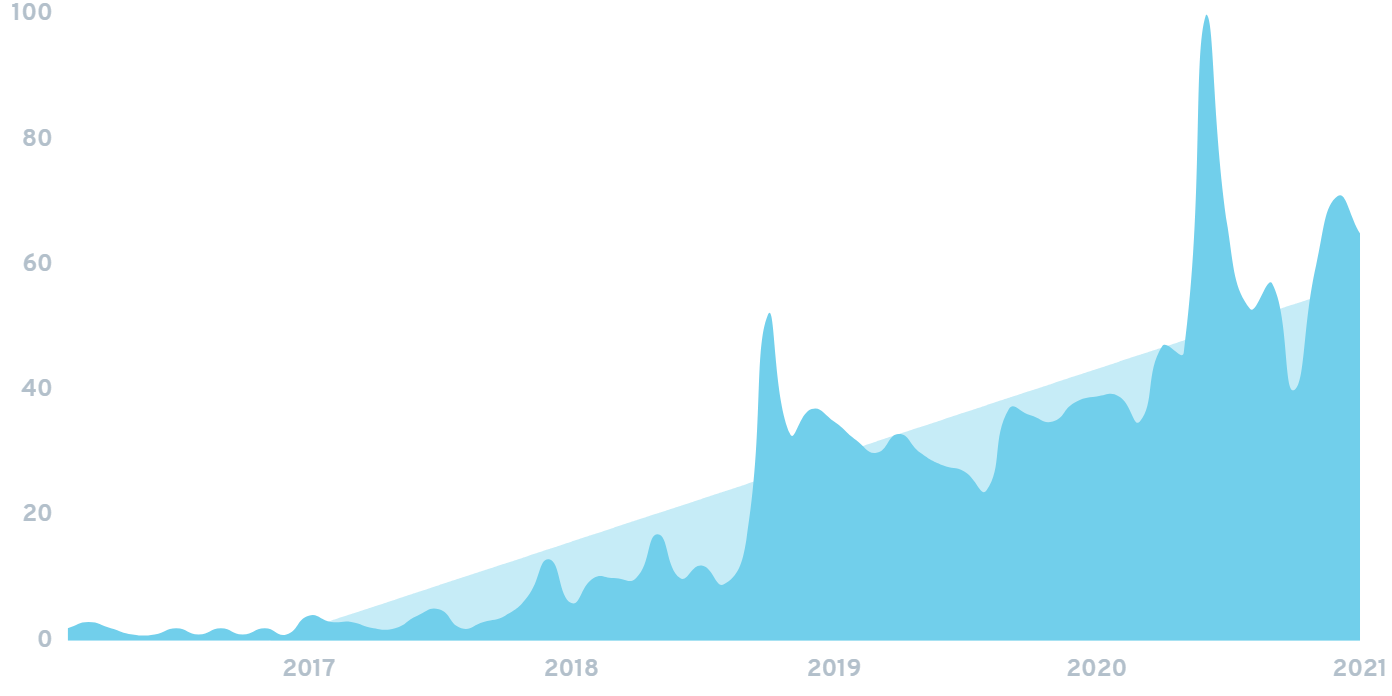 And Fitbit has undertaken a similar study of their own.

In 2018 the FDA approved the Apple Watch for use as a medical device.

Which allowed the product to be used and marketed for the purposes of running ECG tests and detecting atrial fibrillation. 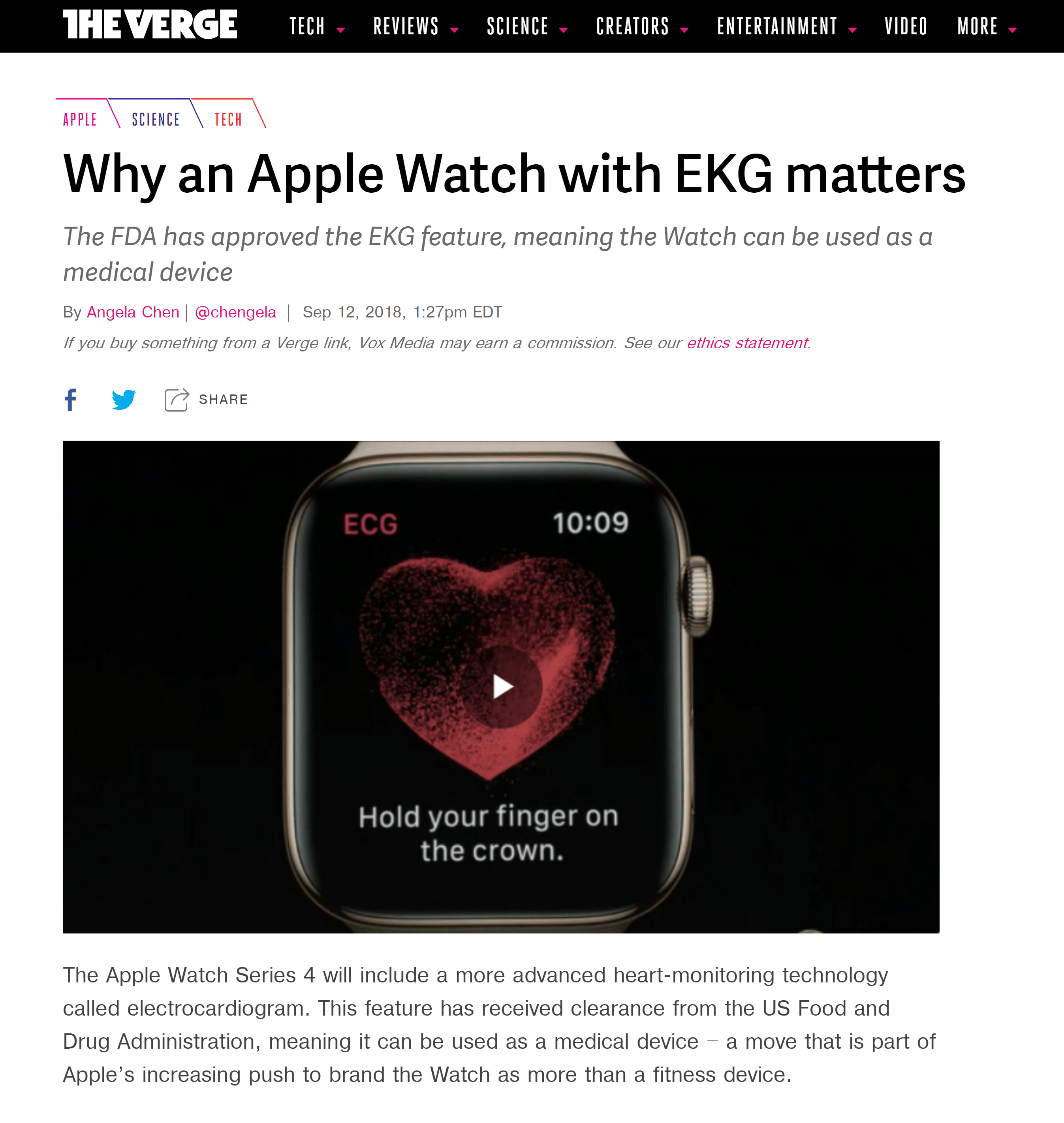 Putting that enormous scale to use, Apple partnered with Stanford University to run a study on irregular heart rhythms, related heart conditions and the smartwatch's ability to detect them.

With over 400,000 participants, the study was the largest ever of its kind.

And last year, Apple announced it was partnering with Johnson & Johnson to run a new heart study using the Apple Watch (and iPhone) again.

This time, the study is focused on people over the age of 65.

Is Apple's entry into healthcare a temporary one?

"I believe, if you zoom out into the future, and you look back, and you ask the question, ‘What was Apple’s greatest contribution to mankind?’ it will be about health." 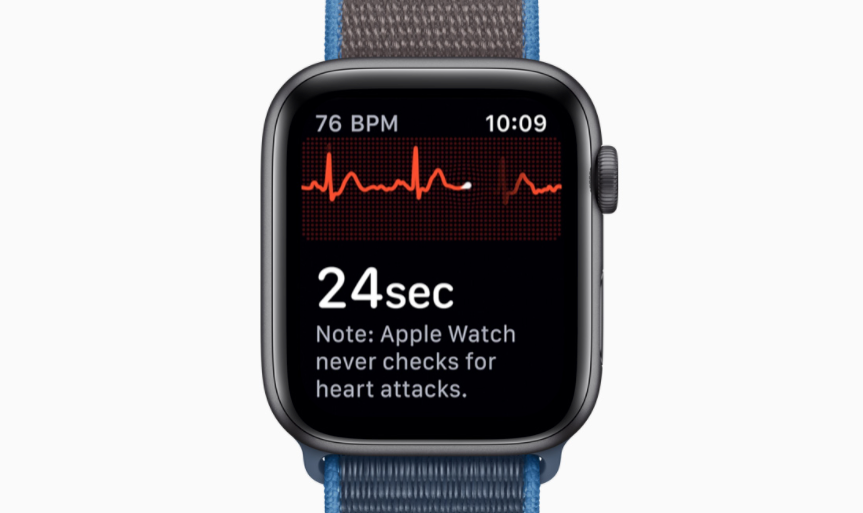 In total, the internet of things (IoT) is estimated to save the U.S. healthcare system tens of billions of dollars each year.

But not everyone is celebrating the achievements of Apple or other tech companies.

Many cardiologists have spoken out against what they are calling exaggerated claims on Apple's part.

Their chief concern: the widespread use of real-time monitoring may lead to unnecessary medical treatments.

In fact, The Washington Post reported that pregnancy-tracking app Ovia was selling its users' health data to their own employers.

While 23andMe shared genetic data from 5 million of its customers with drugmaker GlaxoSmithKline.

With these concerns in mind, will people think twice before giving Apple and other companies access to their health information?

Telemedicine is a $3.5 billion industry in the United States.

And it's growing faster than ever.

In fact, online searches for "telehealth" have increased 250% over the past 5 years. 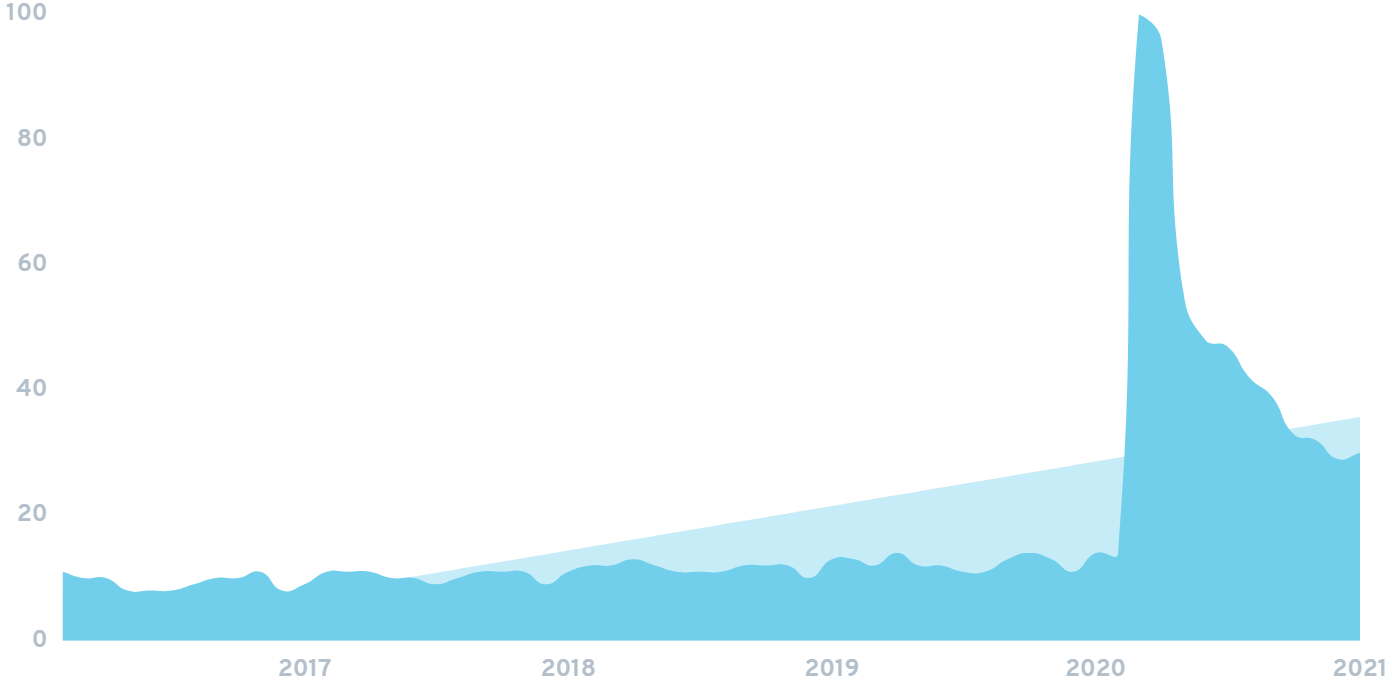 Searches for "telehealth" spiked at the start of the COVID-19 crisis. But remains higher than pre-pandemic levels.

The same survey found that 57% would like a remote monitoring option for ongoing health issues. And that 52% would choose virtual care for routine appointments.

Even for disease diagnosis, 42% of consumers would "definitely or probably" choose a virtual option if given the choice. 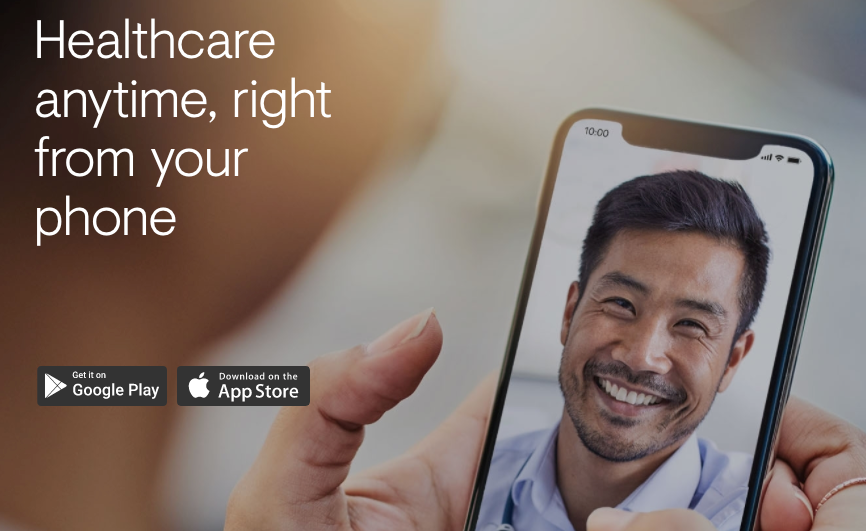 Payers are improving their telehealth options as well:

(Typically reimbursements that are the equivalent to in-person visits and treatments.)

With 71.6 million Baby Boomers in the U.S. in or approaching retirement, demands on the healthcare system will undoubtedly increase.

Telehealth offers a more efficient - and more hygienic - mode of treatment, which should help alleviate that burden. 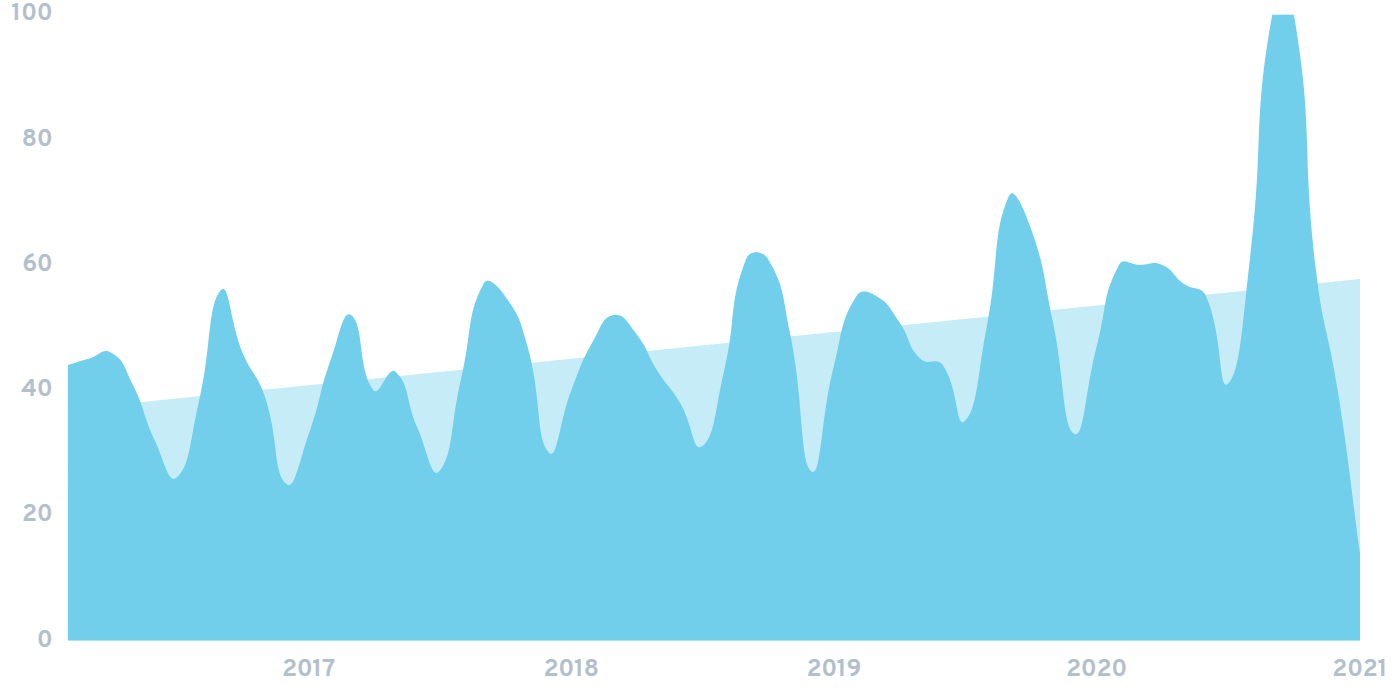 Google searches for "social determinants of health" are up and down. But the latest spike was the biggest.

According to the Agency for Healthcare Research and Quality, "minorities often receive poorer quality of care and face more barriers in seeking care” compared to Caucasians.

In some localities, the disparity in public health care has reached a breaking point.

The Affordable Care Act (ACA) is designed to help reduce the disparity. But it appears that more can be done.

For example, the CDC has stated that African-Americans, refugees, and children who were adopted from outside the U.S. are all at higher risk for lead exposure.

And COVID-19 has been disproportionately hard on communities of color as well, with black Americans dying at 3 times the rate of whites.

But it is something that healthcare providers and policymakers are paying more attention to now. And big changes are likely to come.

Many of today’s chronic conditions are primarily caused by behavior.

Overeating, smoking, avoiding exercise, and substance abuse are all massive causes of morbidity in developed countries.

In fact, nearly half of all deaths in the U.S. are linked to behavioral and other preventable causes.

What's more, it's estimated that up to one third of adults meet the criteria for a behavioral health disorder.

So it's no surprise that behavioral medicine is getting attention.

In many ways, behavioral medicine is where mental health meets physical health. 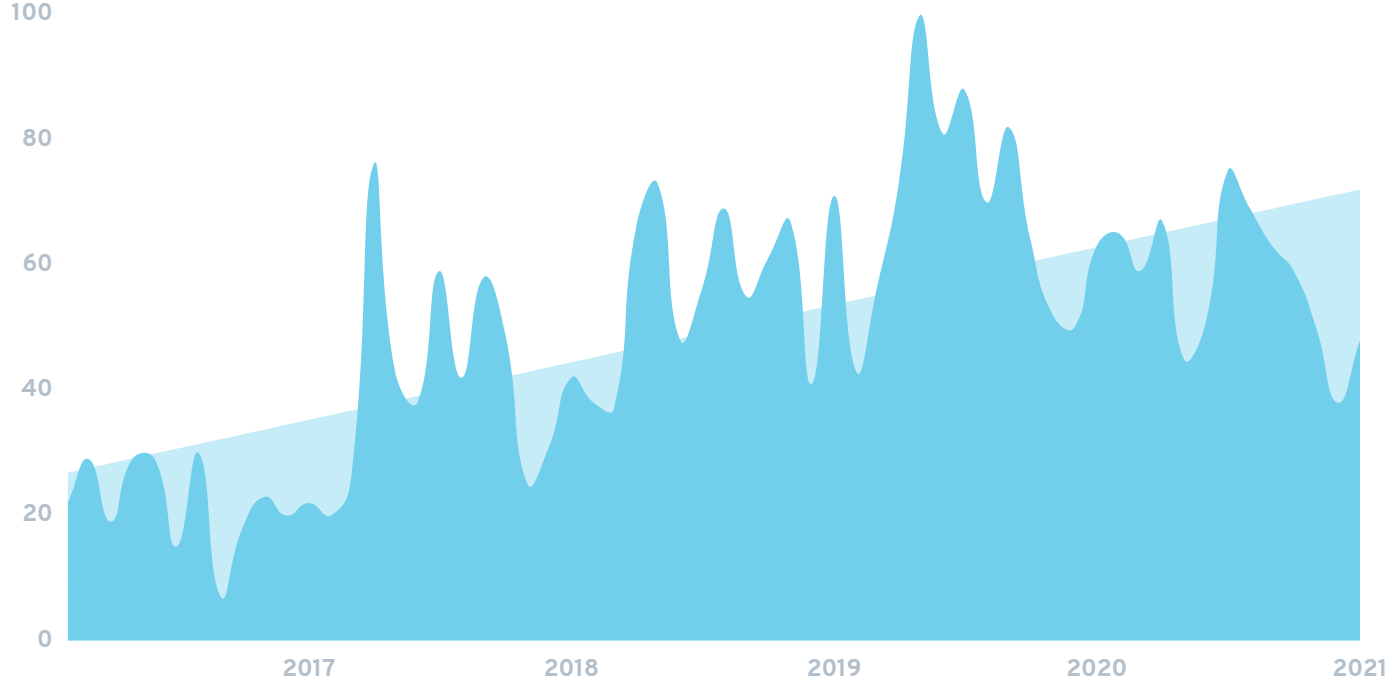 According to the American Hospital Association, fewer than half the adults with a mental health disorder receive treatment.

And 70% of adults with a behavioral health disorder also have a physical health condition.

That's partly why the AHA has announced support for policy changes to improve access to behavioral healthcare.

Over one tenth of large American employers have set up direct-to-employer arrangements with healthcare providers.

Will these companies stop there?

When Amazon rolled out a telehealth service called Amazon Care for its Seattle-based employees in February 2020, there was speculation that it may also be preparing for a public debut.

After getting a taste of the healthcare market with medication delivery service PillPack - acquired for $753 million in 2018 - Amazon seems to be hungry for more. 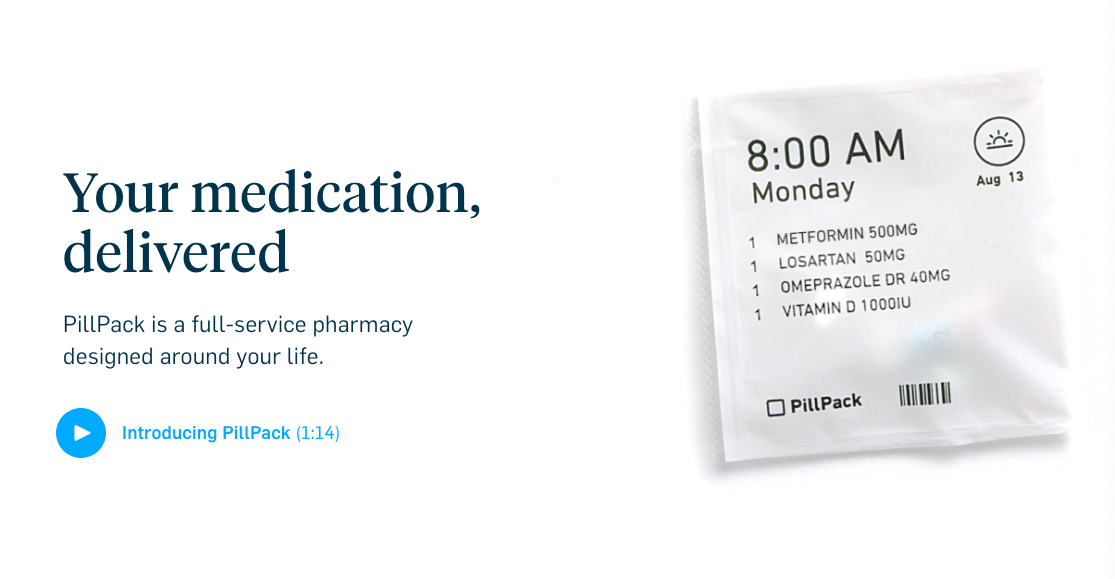 Other companies are now stepping into healthcare, too.

While Google's parent company Alphabet helped to launch a clinic called Cityblock, and has also been working on a project called Medical Digital Assist to build a "next gen clinical visit experience".

As many Americans fight for universal healthcare, a public option, or "Medicare for all", there is a much different trend happening in parallel:

Healthcare insurance companies like Bind are offering what they call "on-demand healthcare". 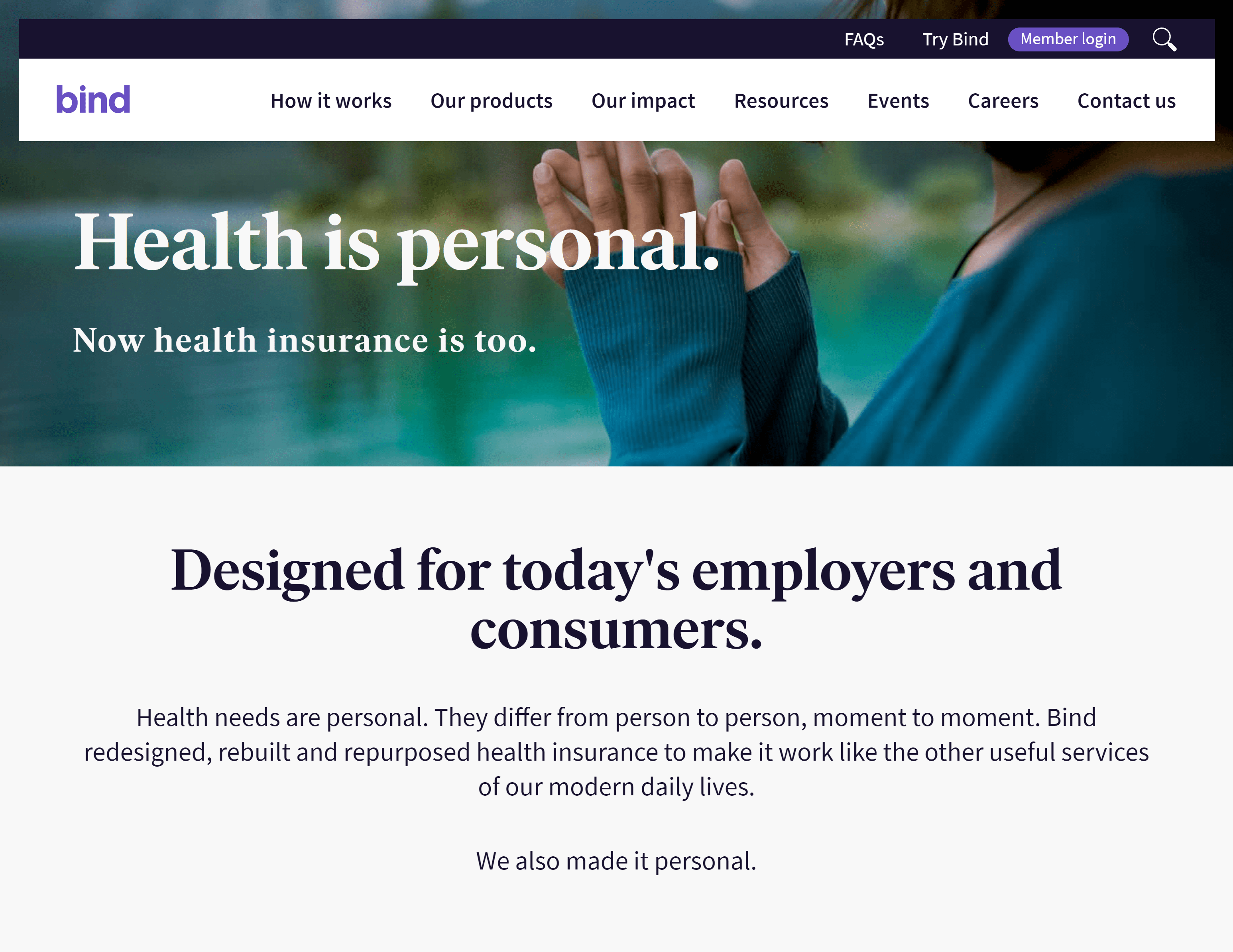 Bind is one of many insurance companies offering on-demand healthcare options.

This feature allows their customers to choose granular levels of coverage from a large menu of options.

And not locking patients into any specific network of healthcare providers.

In theory, this system leads to lower costs as people only pay for what they need - and get to comparison-shop between different doctors.

However, these new types of plans may also expose patients to big financial risks.

After all, it isn't easy to shop around for a good deal when you're having a medical emergency.

And Bind gets around the Affordable Care Act's cap on in-network out-of-pocket expenses by having no network to start with, and by classifying more expenses as premiums (which are not capped).

Others are opting for high-deductible insurance plans, using health savings accounts to help offset that risk. 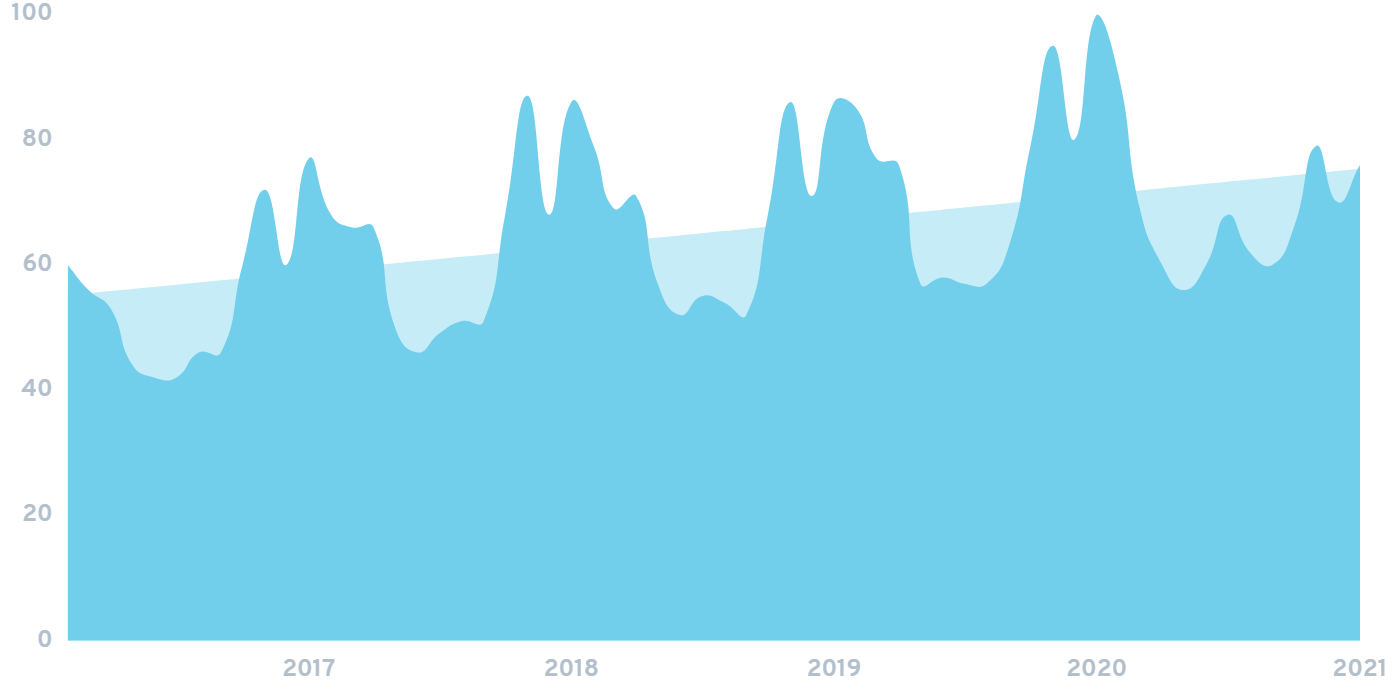 As another alternative to traditional health insurance, cooperatives like Christian Healthcare Ministries allow large groups of people to pool their money together to help each other foot their medical bills.

For-profit alternatives are also on the market, as the healthcare bundles from Sam's Club that we already covered above.

Urgent care centers and other walk-in clinics are another aspect of the unbundled healthcare movement.

There are approximately 9,300 urgent care centers in the U.S. 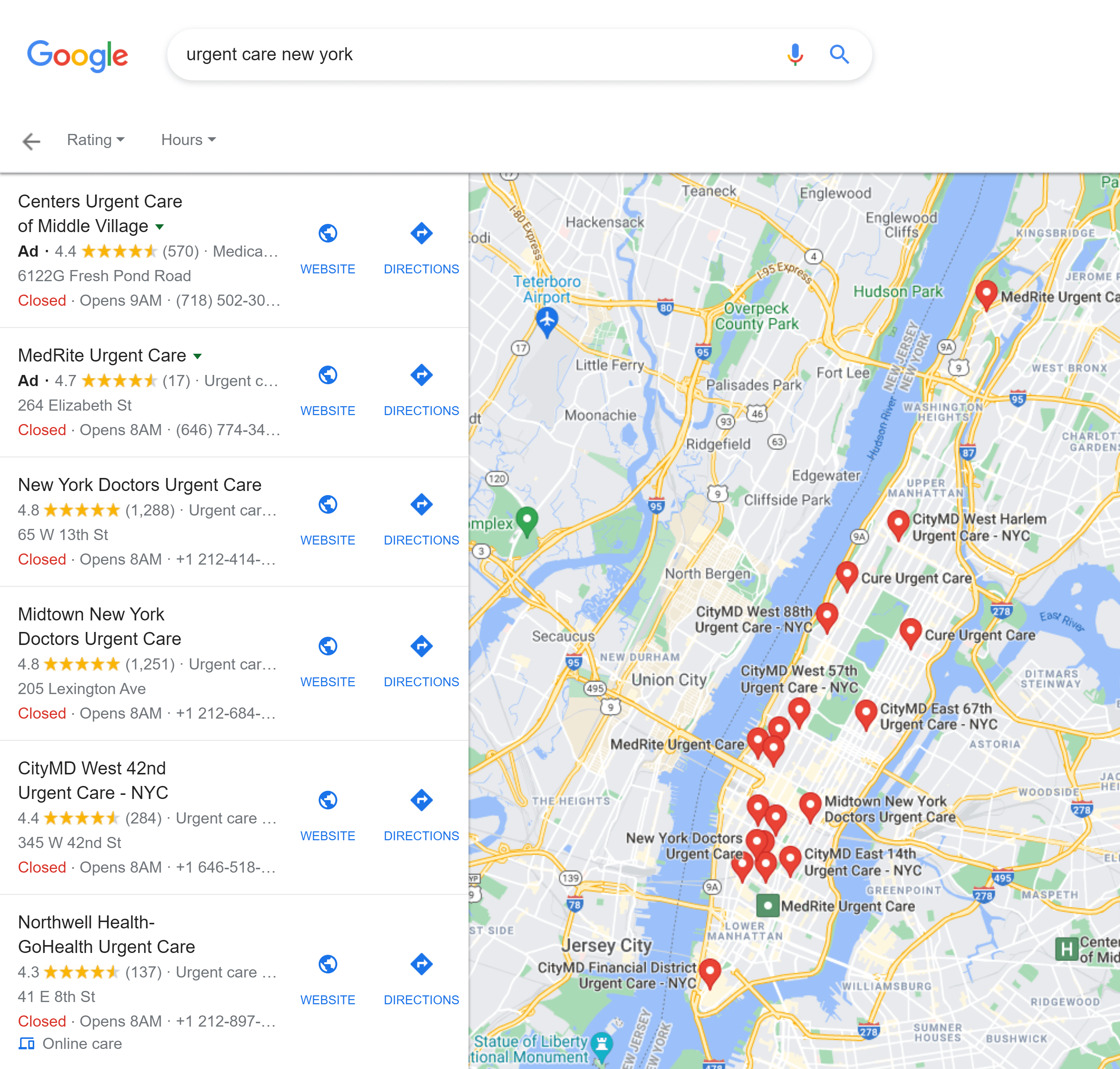 These walk-in medical clinics offer after-hours medical attention for matters that are urgent but not life-threatening.

And they come with an average cost per visit of $125 to $150 without health insurance (compared to $2,032 for an emergency room visit.)

This helps cut back on unnecessary ER visits, which cost Americans $32 billion per year.

As a healthcare segment, urgent care centers have been growing rapidly.

Acquired in by UnitedHealth Group in 2015 for $1.5 billion, MedExpress is the largest urgent care operator in the US, with over 250 locations.

And in April 2017, private equity firm Warburg Pincus made a majority investment in urgent care provider CityMD, reportedly valuing it at around $600 million.

That's our list of the top trends in healthcare for 2021 and beyond.

No one know exactly what the future will bring.

But healthcare organizations that bet on these trends will be well positioned to thrive as the healthcare industry continues to evolve.