Leave, but don’t miss out.
Sign up for our weekly newsletter.

Get 4 exploding trends each week
Trusted by 65,000 people
Insights, expert analysis, and more
Loved by over 65,000 people at companies like:

It’s fair to say that culture is constantly changing.

And it affects everything from consumer tastes to technological innovation.

If you want to learn about the most important cultural trends of the next decade, read on.

One of fastest growing cultural trends has been the rise of the creator economy. 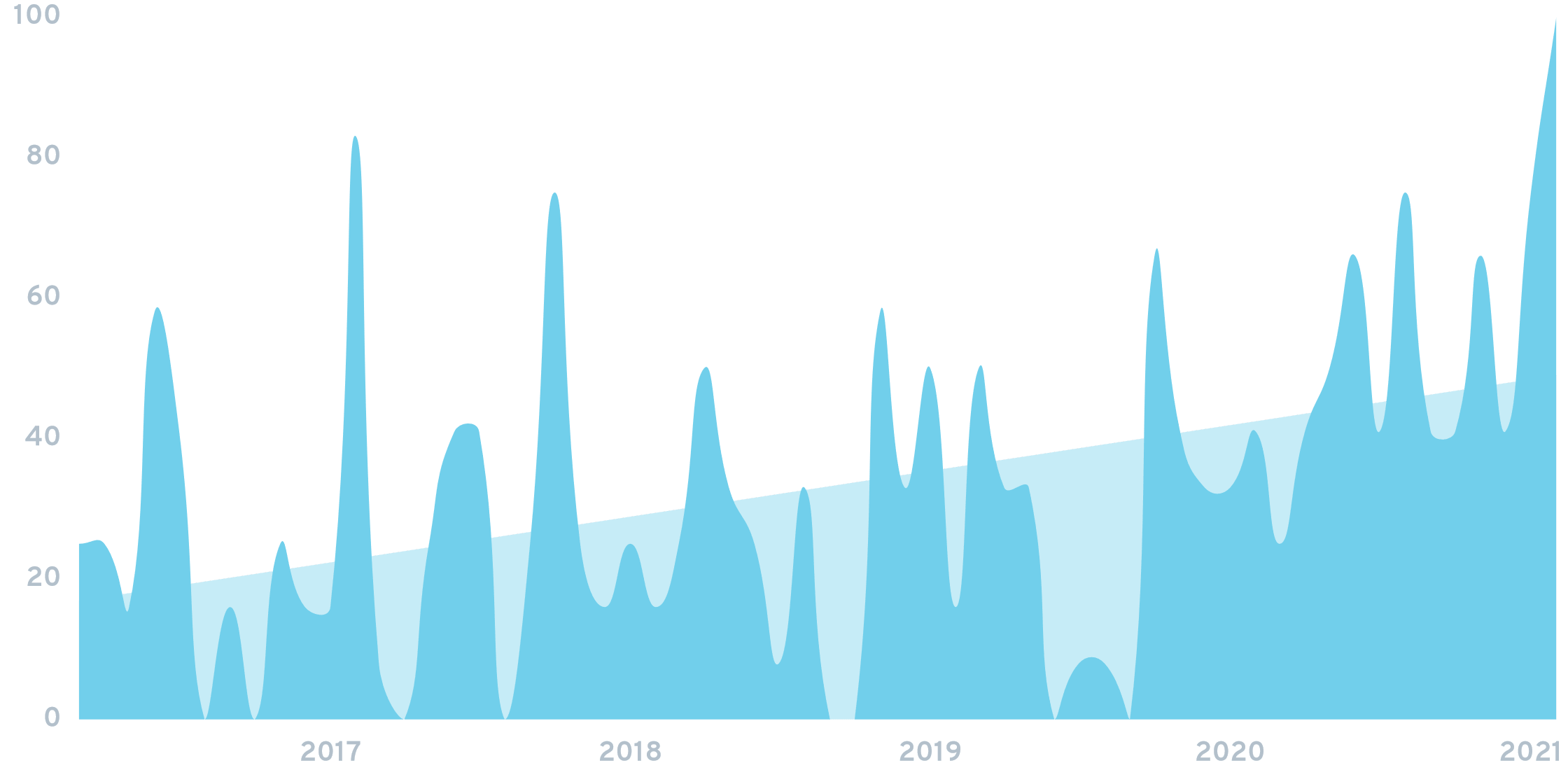 Viewers are increasingly flocking to platforms like Twitch to watch “amateur” content instead of professionally produced television. 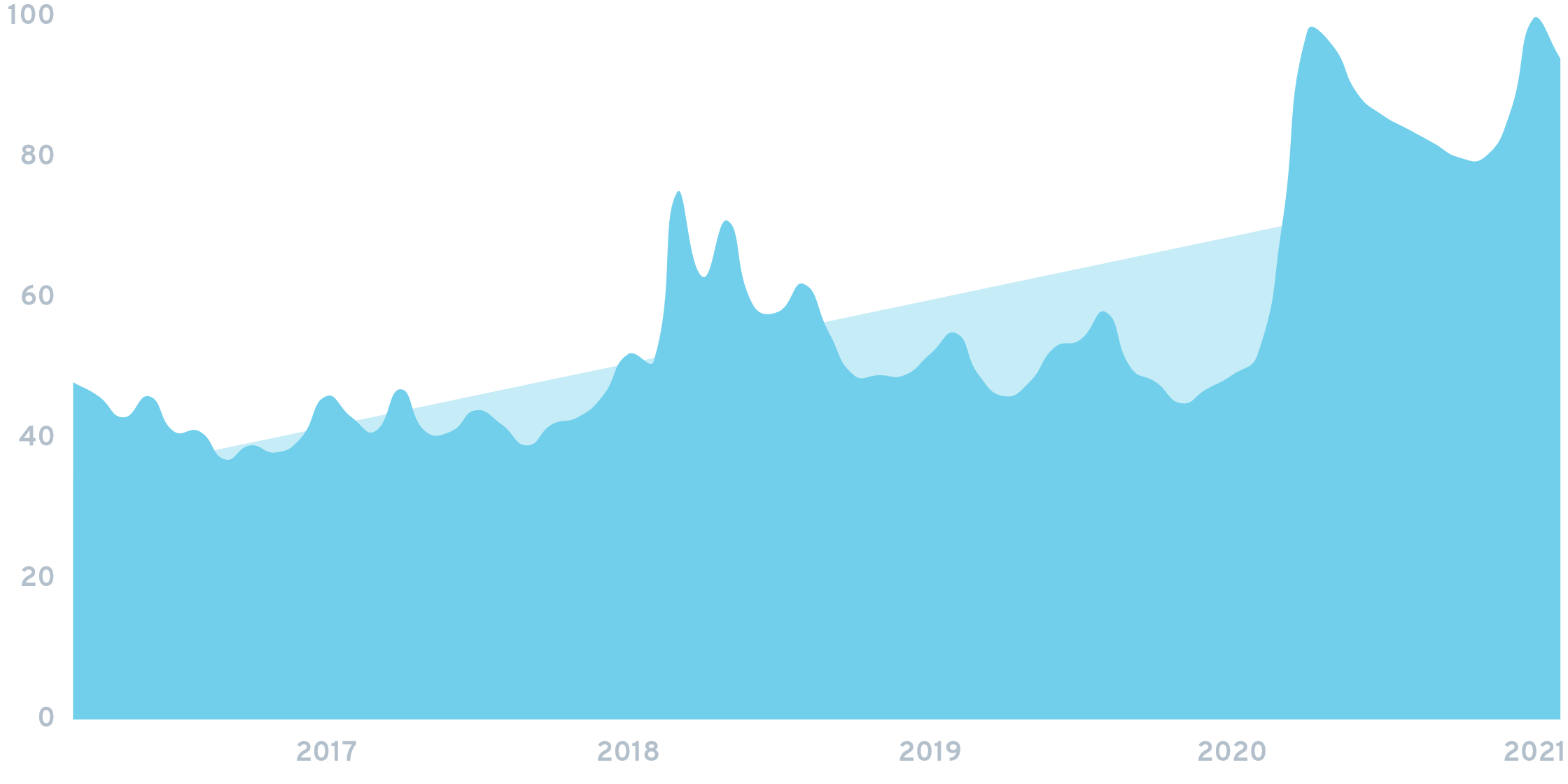 In fact, Twitch’s peak concurrent viewership was already surpassing major cable networks like CNN back in 2018.

And in January of 2021, Twitch Streamer David “TheGrefg” Martinez broke the platform’s concurrent viewership record with 2.47 million viewers at one time.

More important than consumption, however, is the number of new creators that are emerging in this environment.

It’s estimated that there are 50 million people around the world who now consider themselves creators. One survey even shows that more kids today want to become YouTube stars than astronauts.

Speaking of YouTube, as of 2020 there were 30 million channels on the platform. And new channels are being created at a rate of 23% per year.

The professional YouTube dream, though, may be out of reach for most. 97.5% of YouTubers make less than $12,000 from the platform.

On the other hand, the number of YouTube channels that made five or six figures a year grew by 40% in 2019.

To get a further feel for the size of the creator economy, just look at the influencer space. A market that didn’t exist 20 years ago is now worth roughly $8 billion. And it is expected to almost double in size to $15 billion in the next two years. 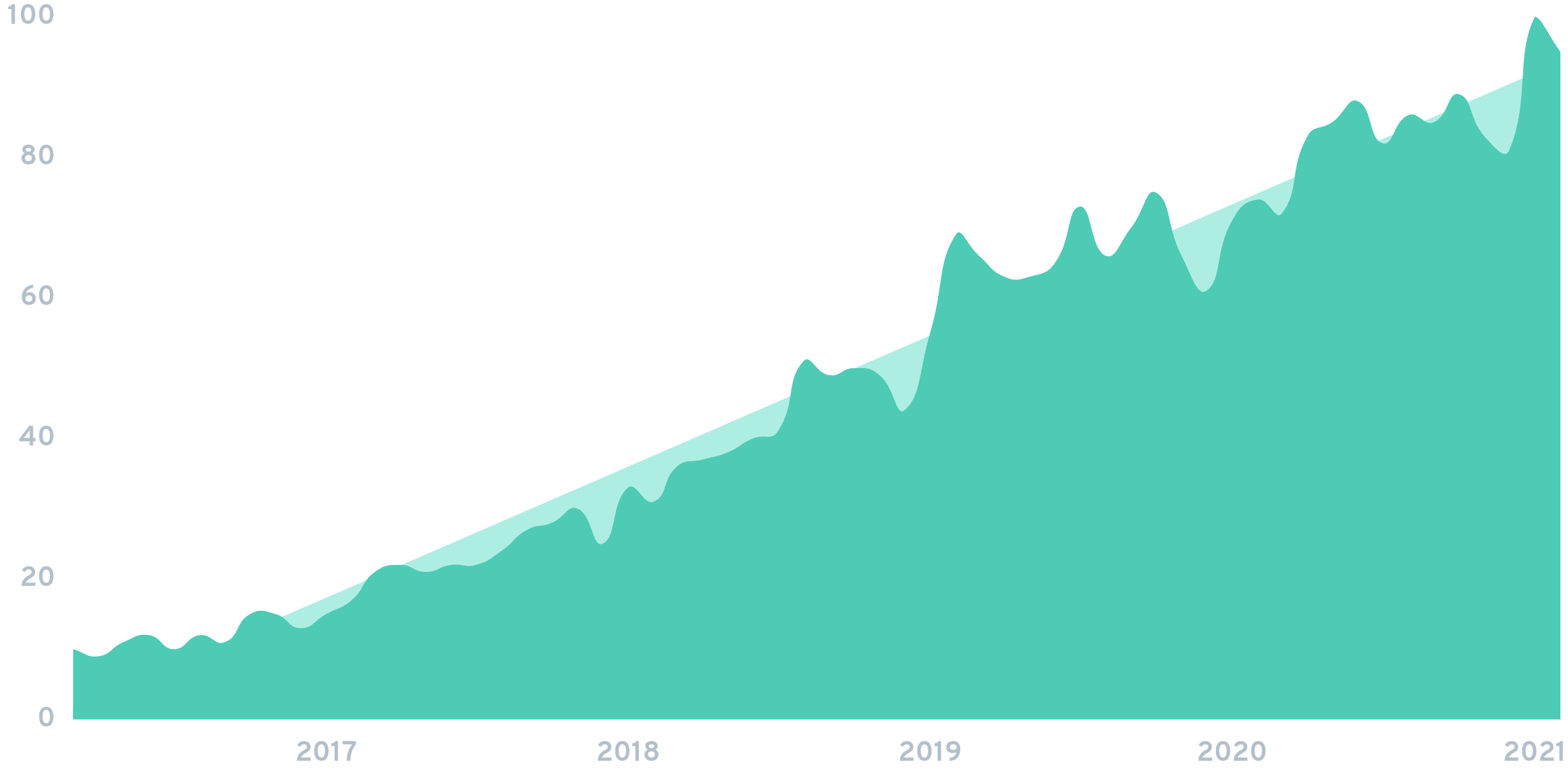 Searches for Influencer Marketing have grown by 850% over the last five years.

This has even spawned a new kind of creator – the micro influencer. 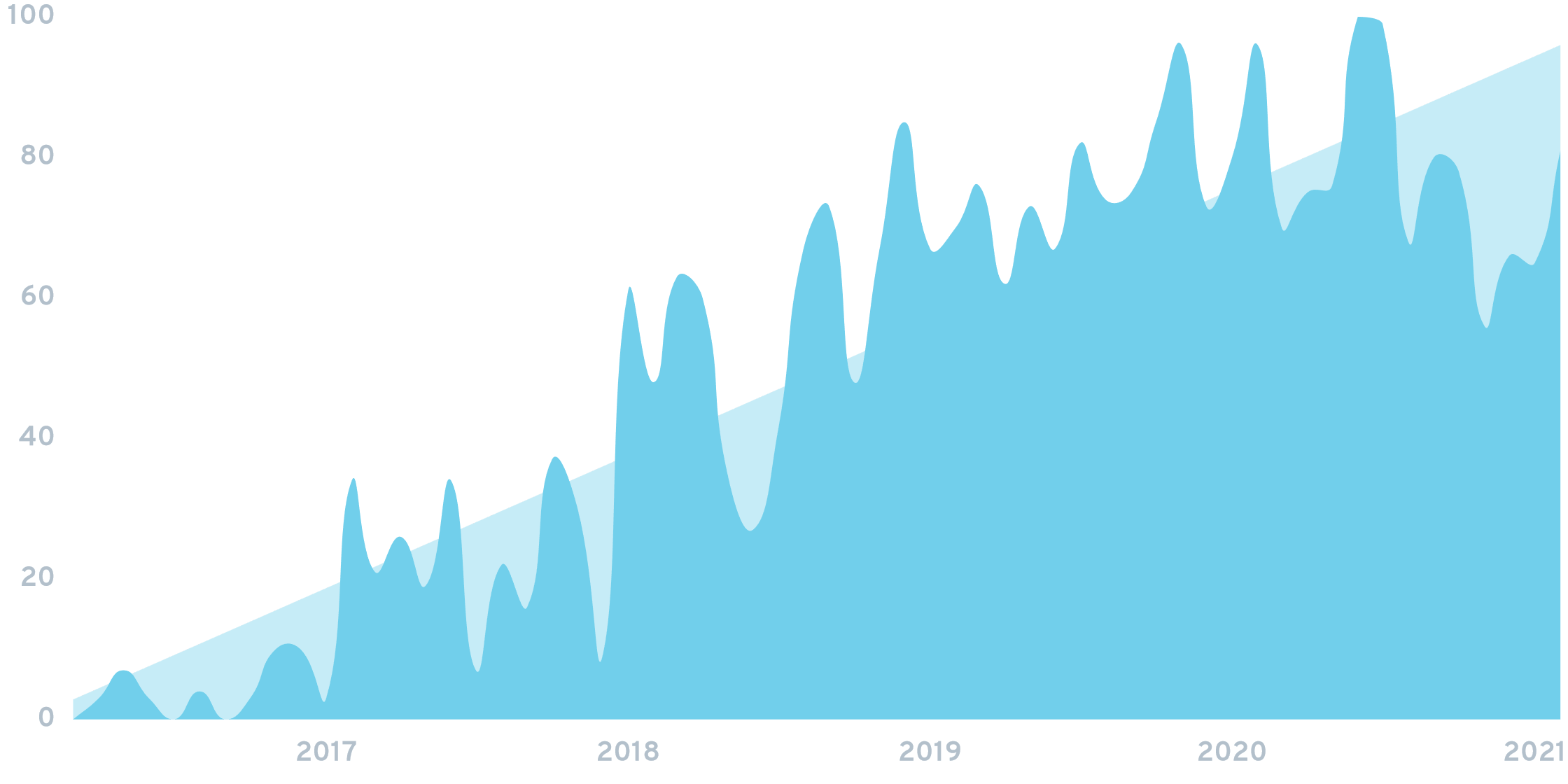 Searches for Micro Influencers have increased by 1000% since 2016.

These are individuals with smaller followings, but they make up the majority of the influencers on popular platforms like Instagram.

More than 558,000 Instagram influencers have more than 15,000 followers. And it’s estimated that this group (between 15K and 100K followers) makes up 81% of influencers on the platform.

Over half of these influencers also say they want to work as full-time creators.

This sector of the market is also very effective as a marketing funnel. Data has shown that influencer accounts with a relatively lower number of followers actually drive more engagement.

By contrast, accounts with an audience of 10,000 have an average engagement rate of only 3.6%. 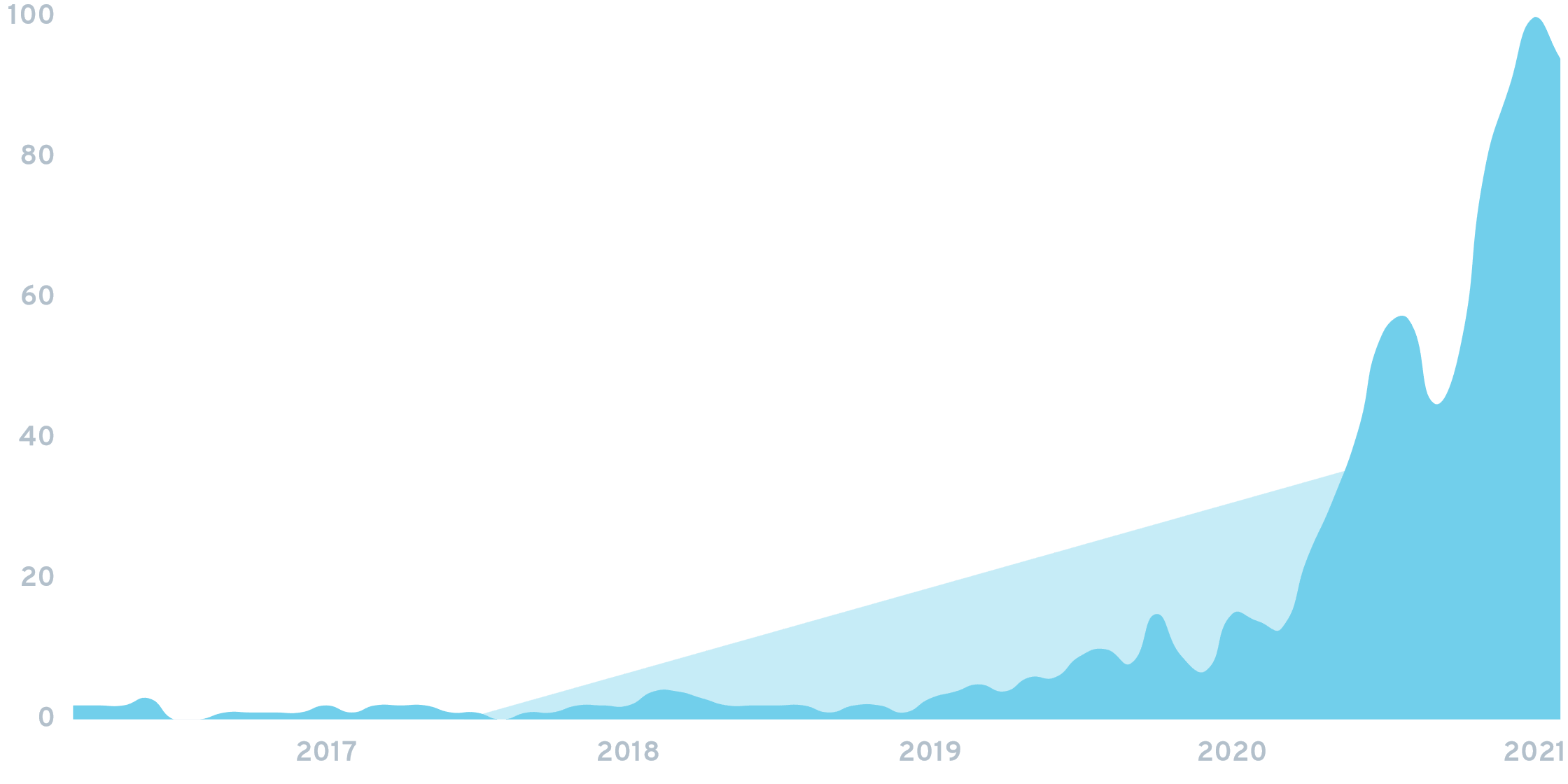 Searches for Substack have increased by 4600% in five years.

The relatively young company raised $15.3 million from Andreeson Horowitz last year. And some of the platform’s top content creators are making several hundred thousand a year through their newsletters.

It’s no secret that a growing number of corporations and global brands are engaging in social activism.

And for good reason.

One of the most prominent brand social stances has involved climate change. According to Nielson, 81% of consumers feel that companies should take action to improve the environment.

Approaching brand purpose as a viable investment has also helped some companies grow.

After creating its Sustainable Living Brands in 2018, Unilever saw those brands grow 69% faster than the rest of its business in 2019.

COVID-19 has helped change this area as well. It’s been reported that 89% of brands have created COVID-related campaigns.

If they weren’t positioning their brands for social causes before, many companies now are.

Some of the more popular brand positioning has involved using certain logos and designs to spread awareness for social distancing. After calling on its sellers to produce facemasks in April of 2020, Etsy also sold over $133 million in facemasks in the first month alone.

And in Denmark, the Carlsberg beer brand is enticing consumers to support their local bars with its “adopt a keg” campaign. Whenever anyone buys a Carlsberg beer, they can reserve a pint from a keg at a local bar by scanning the barcode.

There are even entire brands created with activism in mind.

The TerraCycle brand Loop is a good example.

Loop’s entire purpose is focused around a sustainability angle. It creates reusable packaging for products like lotion and wipes. And it displays this fact prominently.

Increasingly, nostalgia is playing an important role in entertainment.

Before it left Netflix for NBCUniversal’s Peacock streaming service, Friends was one of the most watched shows on Netflix. Usually following close behind was the 80s-themed Netflix original, Stranger Things.

In addition, Cobra Kai, a show based on the 80s Karate Kid movie franchise, is one of the most popular shows on Netflix.

On top of that, some of the highest grossing films of the last decade were remakes or re-imaginings of older franchises, such as Star Wars: The Force Awakens, The Lion King (live-action version), and Jurassic World.

The COVID-19 lockdowns also seemed to have increased demand for nostalgia-driven content.

A study by Nielson found that since the start of the pandemic, over half of music listeners are demanding older songs.

In 2020, Bob Dylan sold his 600-song music catalog to Universal Music Group for an estimated $300 million. Three members of Fleetwood Mac sold their catalogs as well after a popular TikTok video caused a resurgence in interest.

4. The Digital World is Bleeding into the Physical World

Everything in the physical world is now influenced by what happens online.

For the past four years, Twitter was the main form of communication for the President of the United States.

And traditional news coverage of online movements like QAnon ballooned in 2020.

Just look at the GameStop Congressional Hearing. The entire ordeal was influenced by online media site Reddit. It morphed from a fringe topic on an online forum to being the center of Congressional attention.

This isn’t just relegated to news coverage, however. GIF’s, once the language of the internet, have now become a part of everyday life. 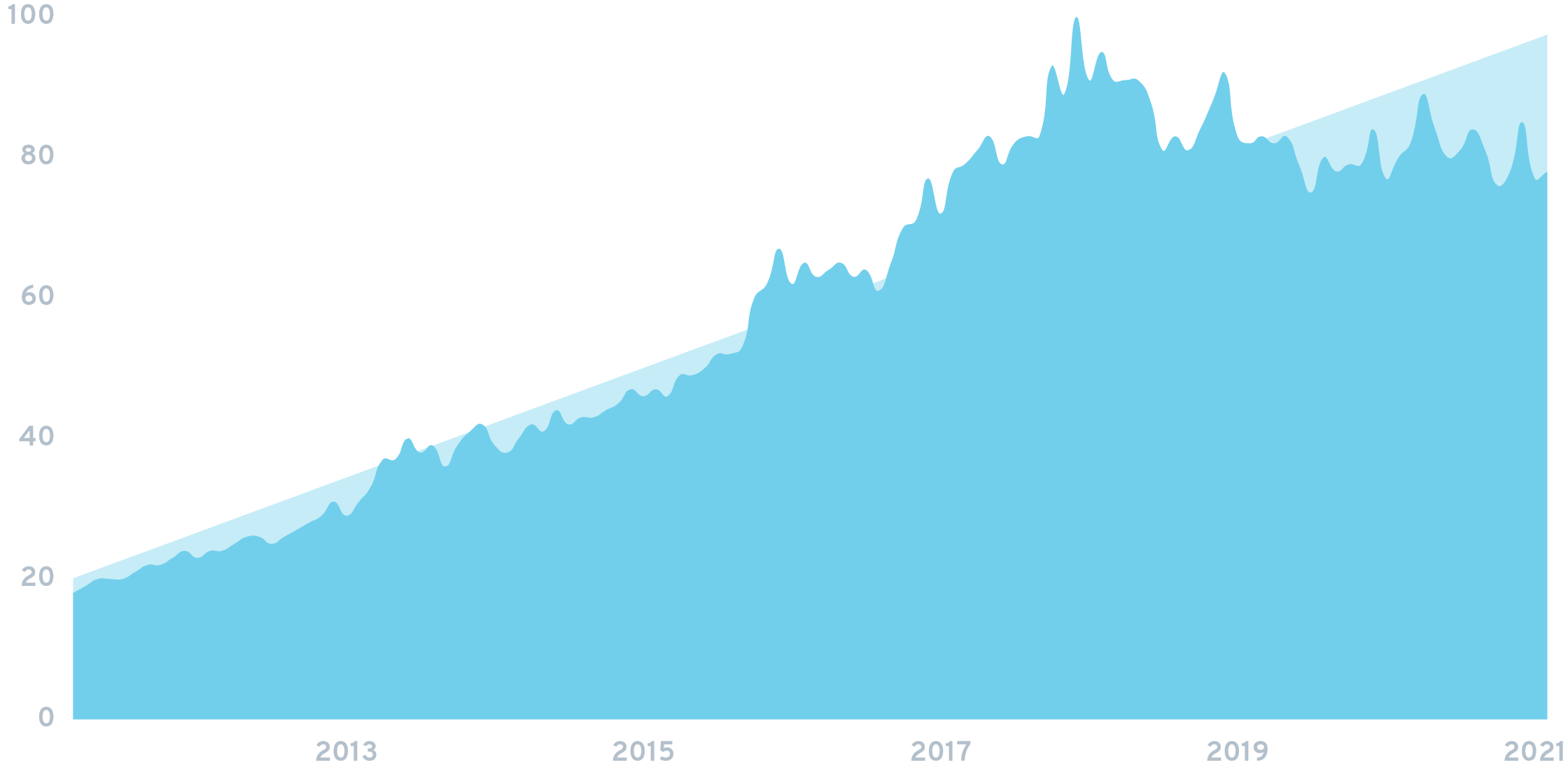 Searches for GIF over the past 10 years.

Facebook even acquired the online GIF library, Giphy, for $400 million in May of 2020. 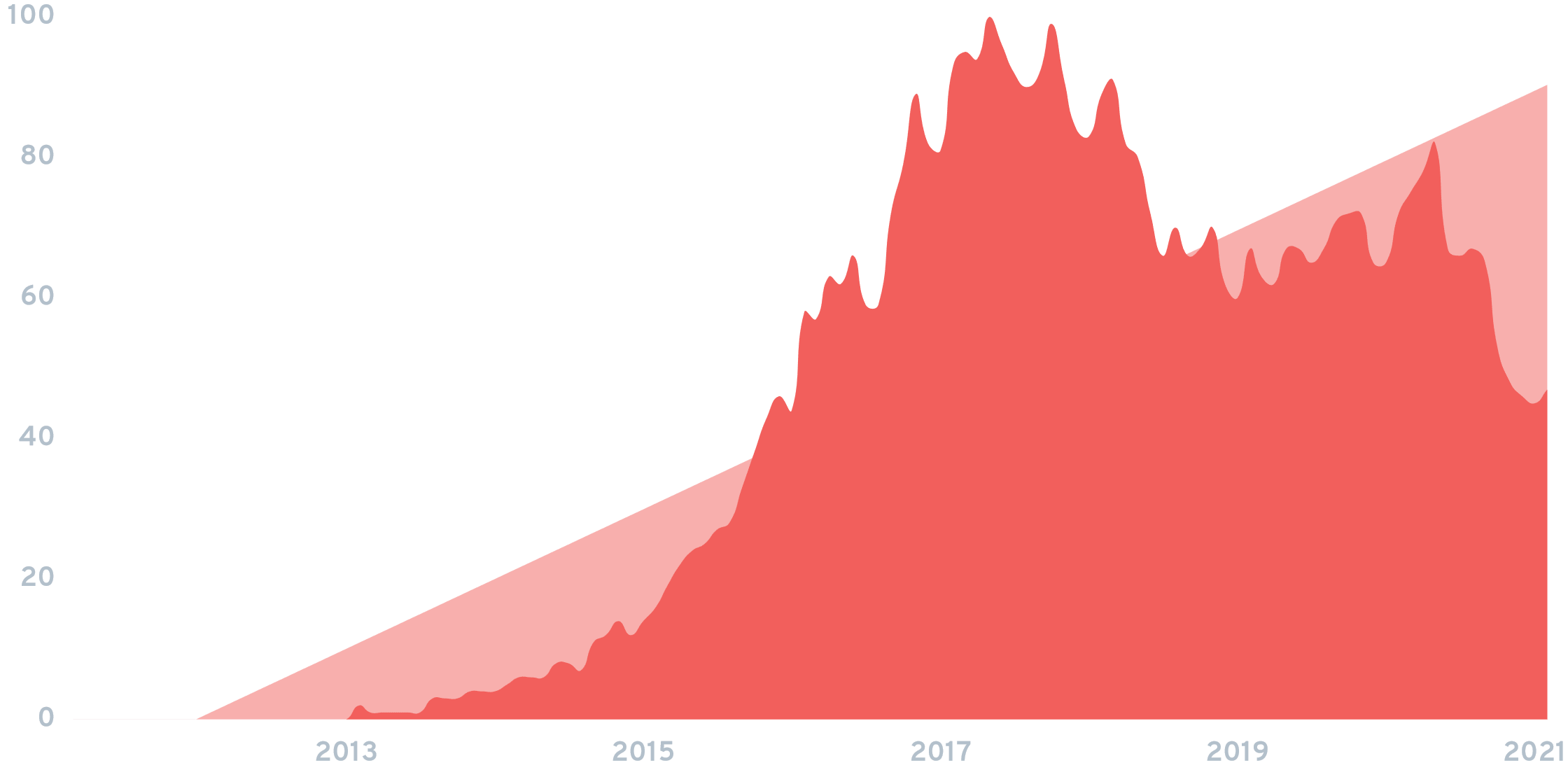 Search interest in Giphy has increased by 4600% over the last five years.

Snapchat reported that in January of 2020 70% of its daily active users (147 million people) used Bitmojis to represent themselves on the platform. 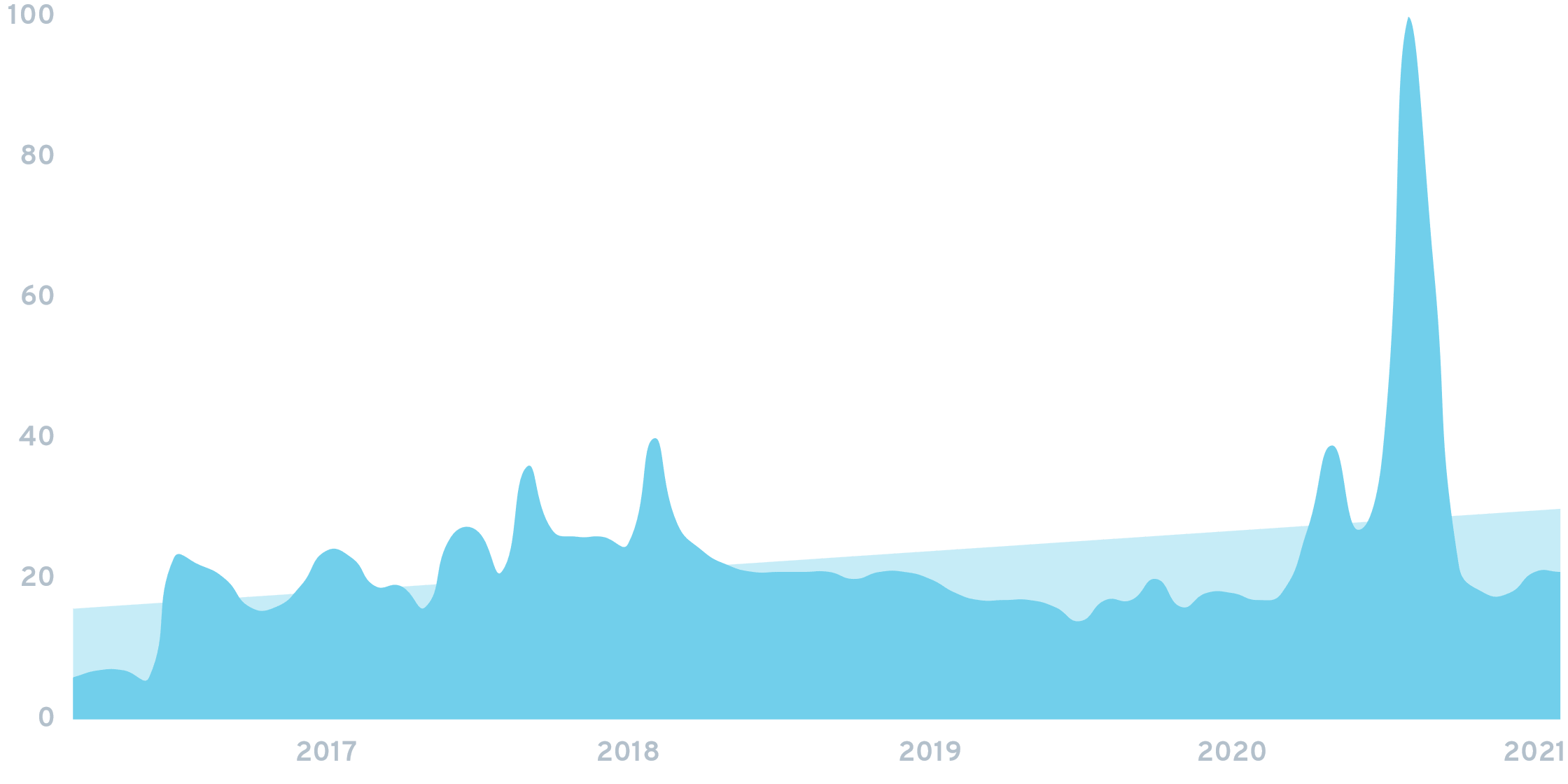 Searches for Bitmoji over the past five years.

Competitors have caught on to the phenomenon as well, with Apple, Samsung, and Google all releasing emoji-based characters since 2018.

In 2020, Facebook even introduced its own Facebook Avatars to the U.S. after rolling them out abroad in 2019.

This digitally-native method of communication has become ingrained in our culture. It’s estimated that over 5 billion emojis are sent through Facebook Messenger every day.

And social gatherings are increasingly becoming digital as well.

For instance, after attracting 10 million viewers to a Marshmellow concert in 2019, Fortnite hosted an event featuring Travis Scott in April of 2020 that drew over 12 million concurrent viewers.

After the success of these two concerts, Epic Games (the creator of Fortnite) started a Fortnite concert series featuring artists like Steve Aoki, Deadmau5, and Anderson Paak.

In addition, even fake people are becoming popular in the real world. 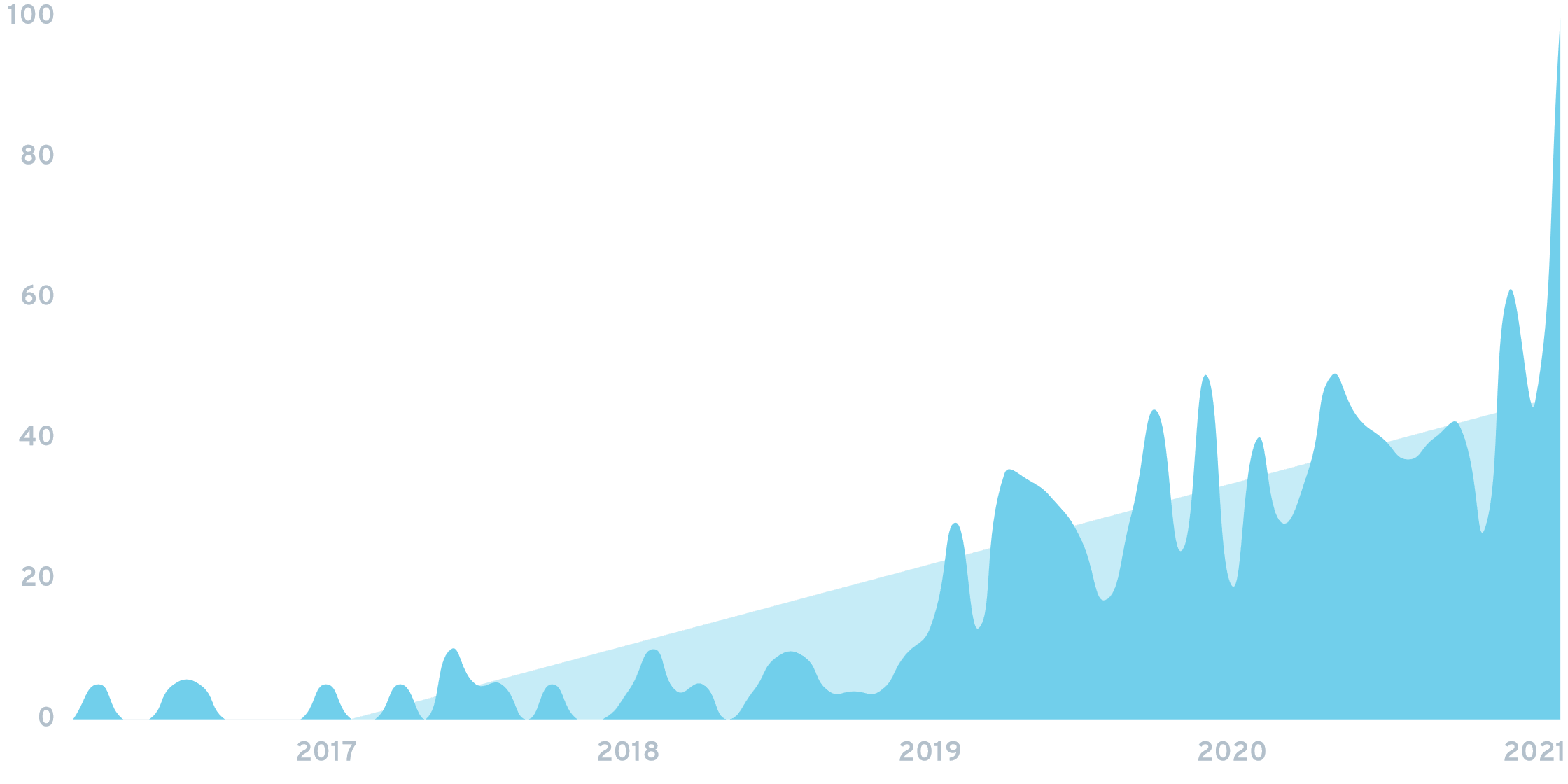 Search interest in the term “virtual influencer” has increased by 99x since 2016.

One of the more popular, Miquela, even models for brands like Prada and has landed sponsorship deals with companies like Samsung.

Humans have a need for community. And that need is, more than ever, being fulfilled by online communities.

Instead of being restricted by geography, people are now finding groups of peers with similar interests and hobbies.

For instance, Facebook reports that there are now 1.8 billion people using Facebook Groups every month. That number has grown by 28% in the last year.

In addition, one of the largest hubs for niche online communities, Reddit, reported impressive growth in 2020. 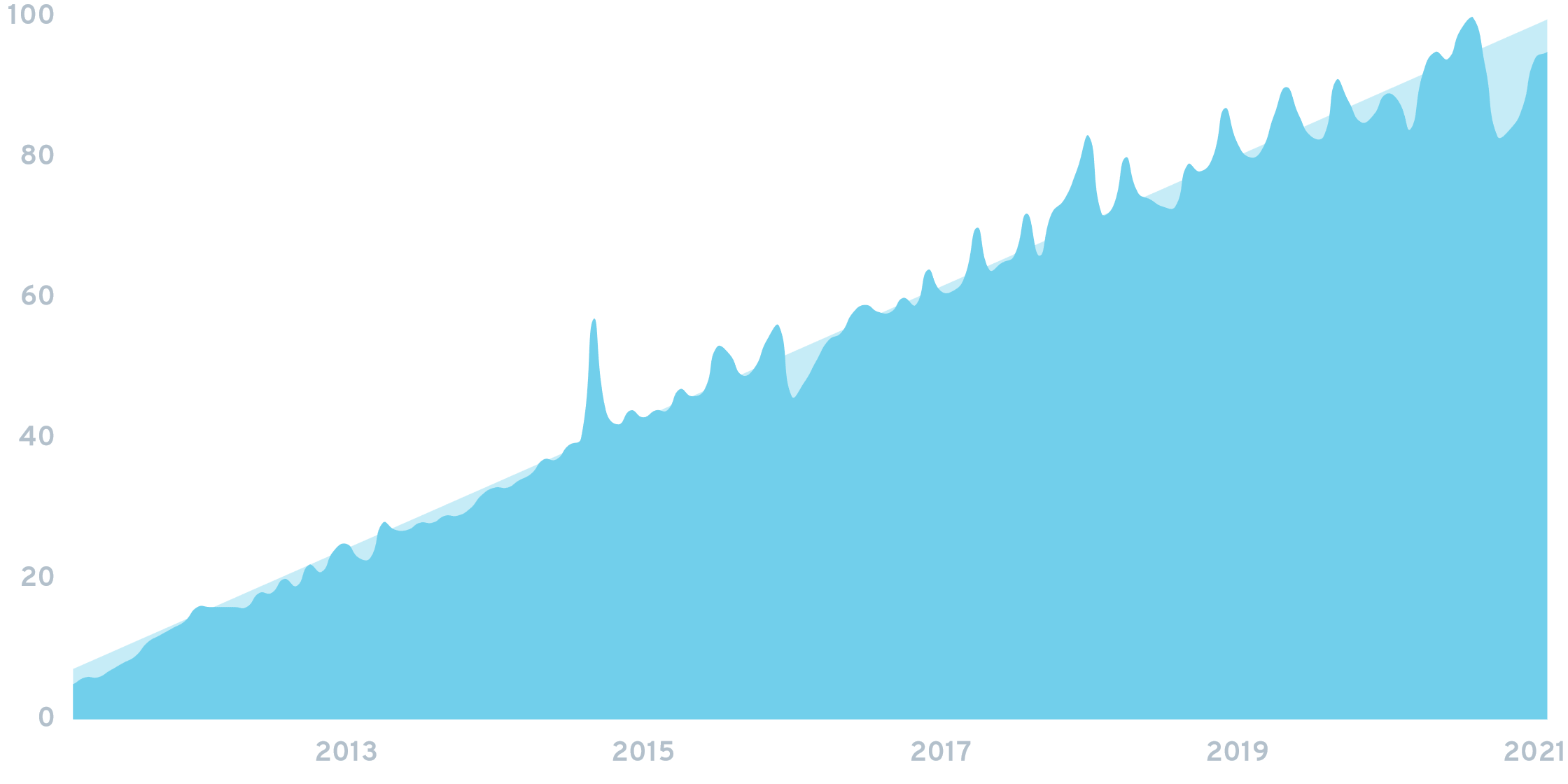 The chat app Discord has also shown that interest in audio-based communities is increasing. Its monthly active users grew to 100 million in 2020, up from 56 million in 2019 (growth rate of 78.5%). 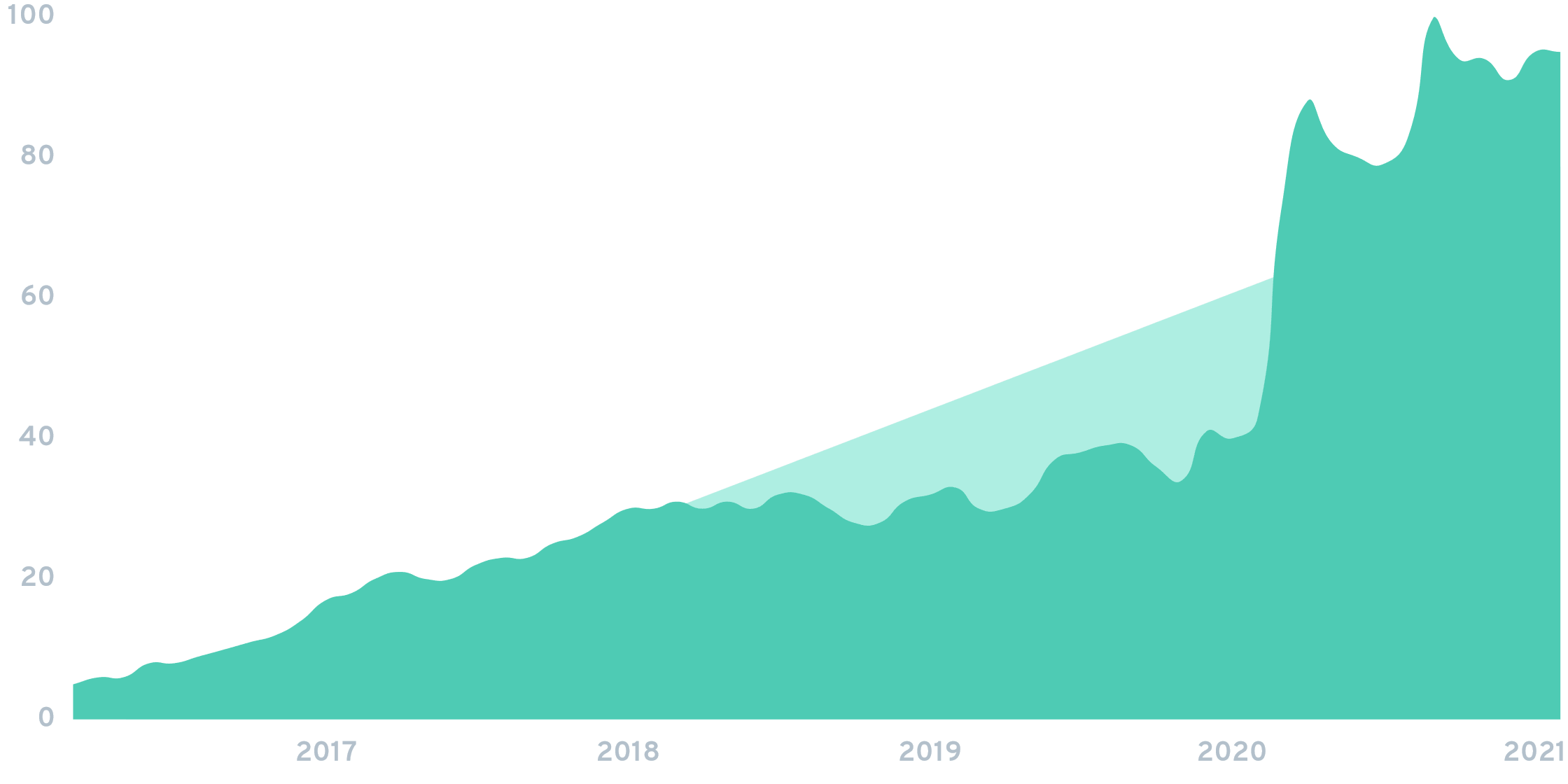 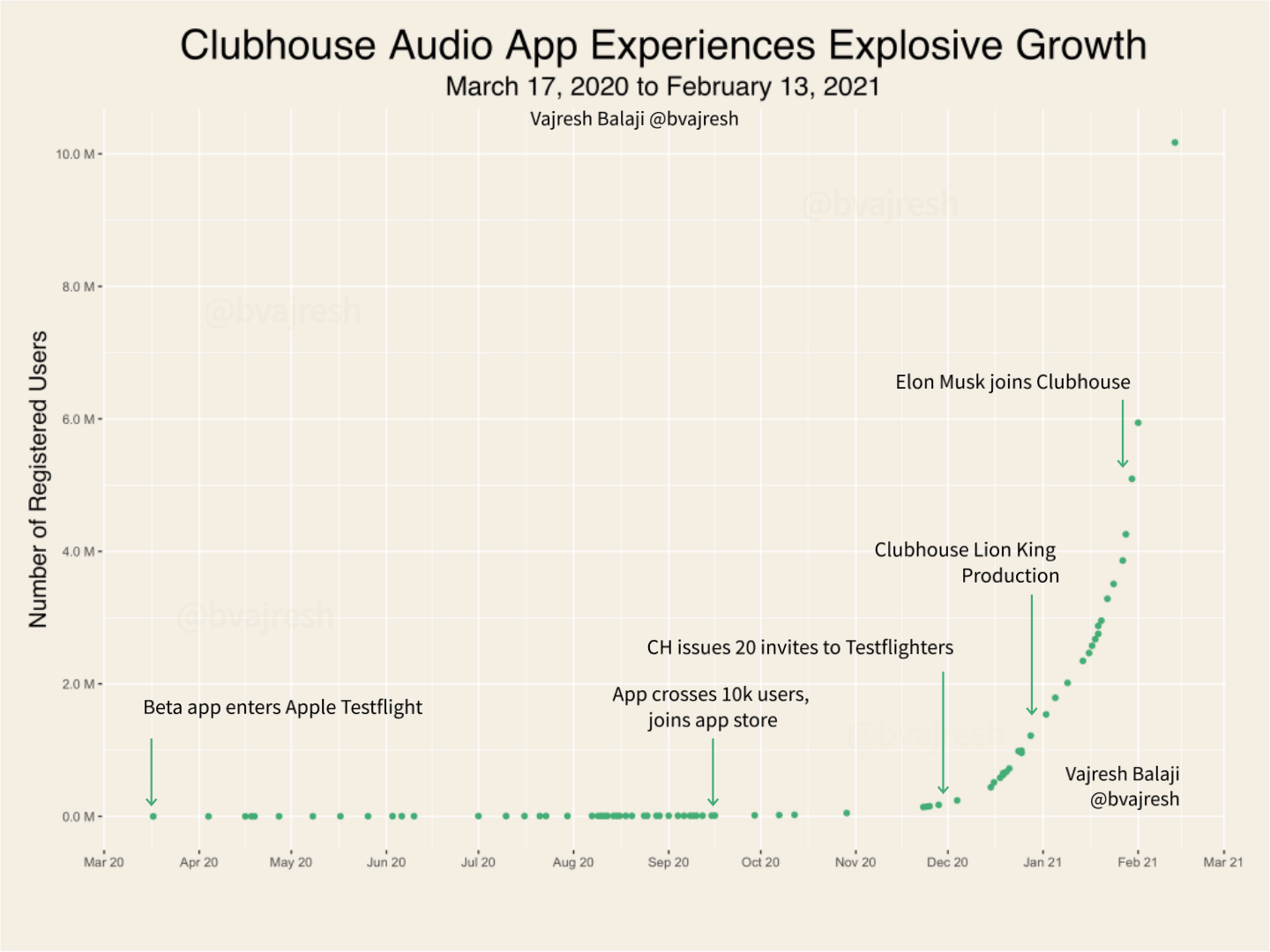 The app was launched in 2020 and now has over 10 million registered users and over 2 million weekly active users. 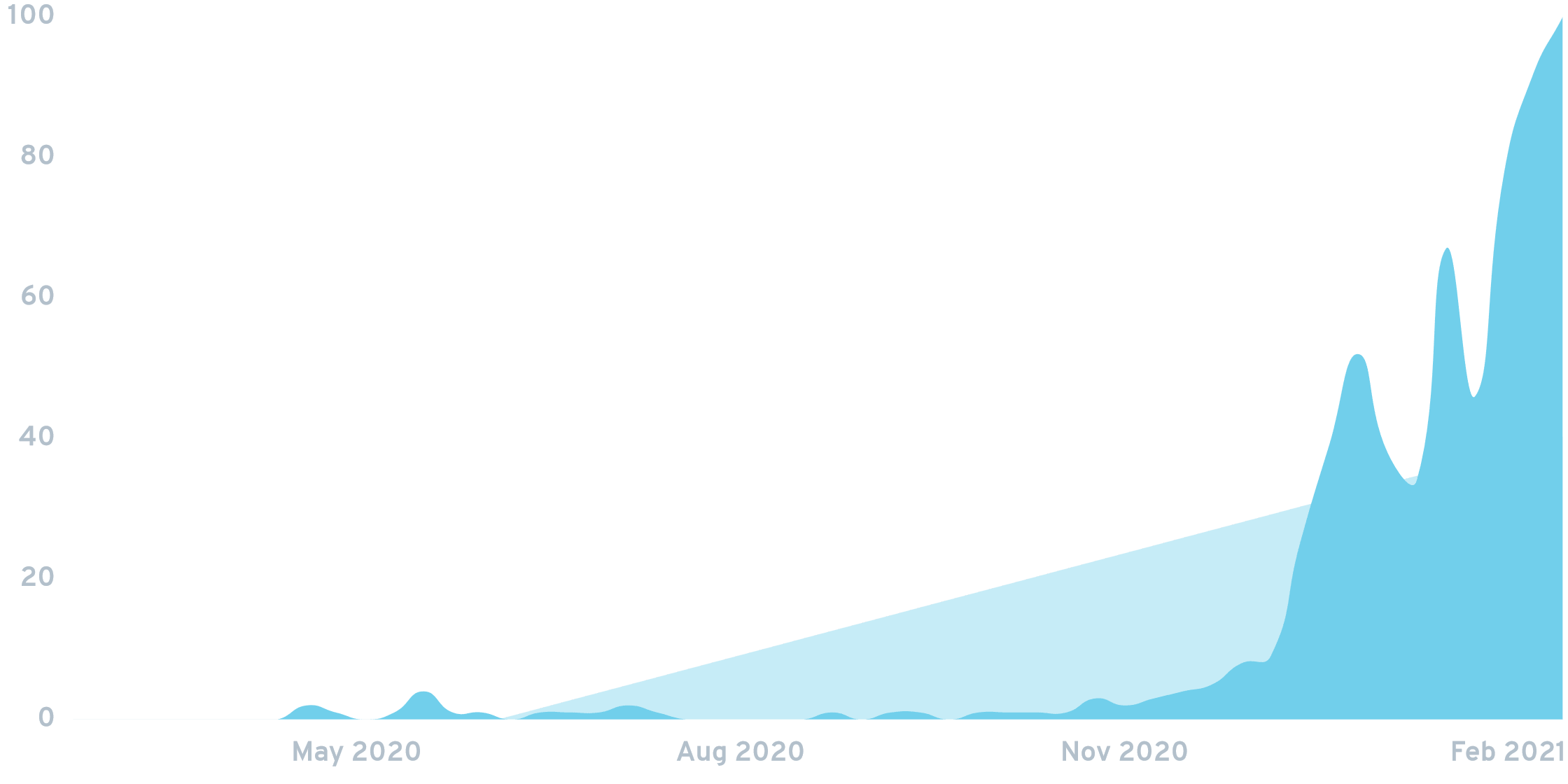 Searches for Clubhouse app are up 99x since the app was launched last year.

Letterboxd, a social media site for films and TV, has seen its user base explode. The platform’s registered members jumped to 3 million in 2020 after steadily growing to 1.7 million since 2011. 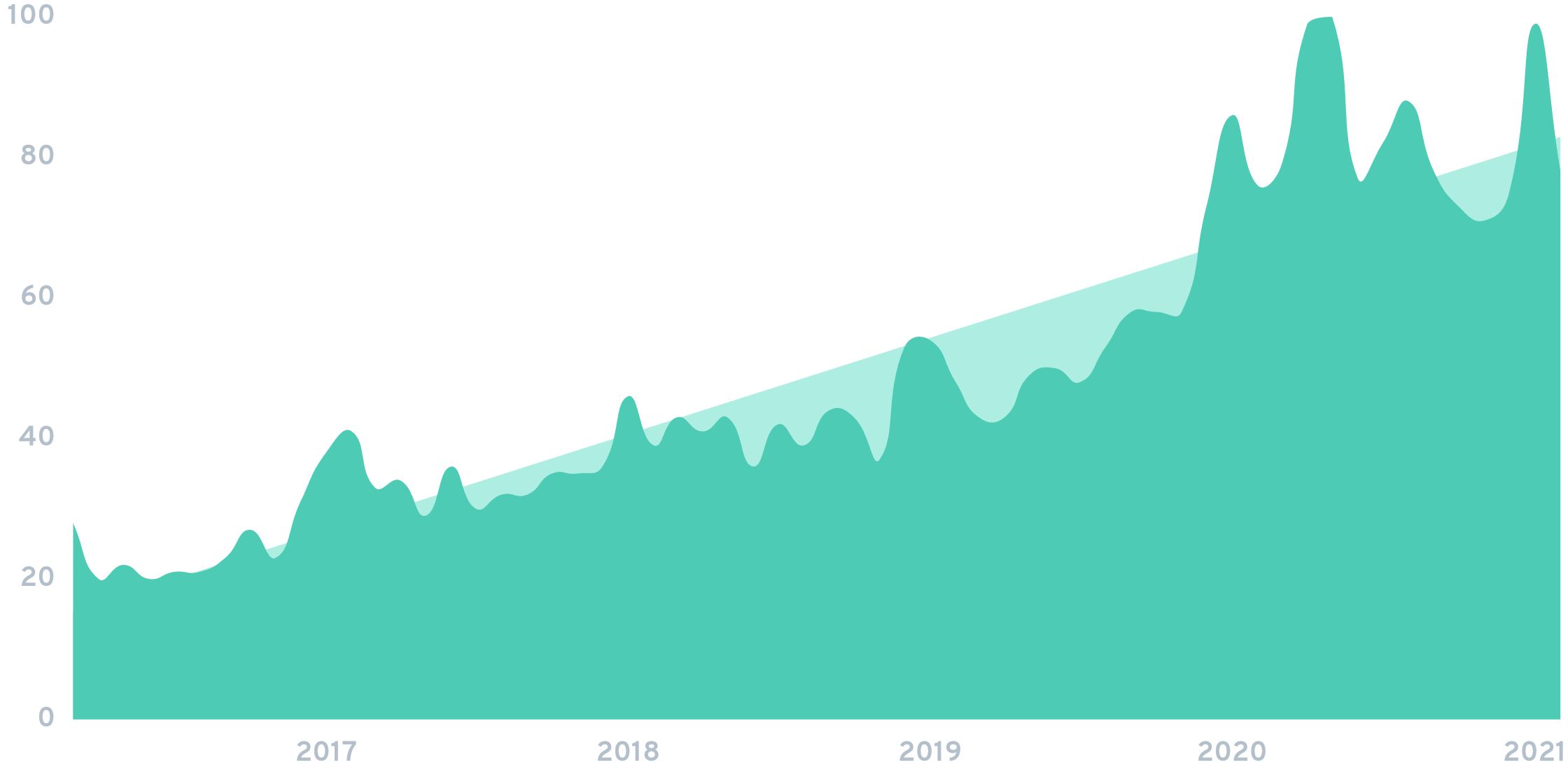 The same can be said for the video game and fitness communities as well.

For example, games like Fortnite and PUBG make money by offering community-based add-ons. The games themselves are free to play.

The platforms make money from microtransactions. Specifically, users buy things like accessories and costumes that enhance their status in the in-game community.

These purchases don’t affect gameplay. Instead, they change how the users interact with each other.

And it’s not like this is a fledgling concept. It’s estimated that over 80% of revenue for the entire gaming industry in 2018 and 2019 came from the free-to-play business model.

Even before the pandemic, the fitness industry was also shifting to community-based applications. Strava and Runkeeper had grown their user bases to 42 million and 50 million in 2019 respectively.

The two apps allow users to track their workouts and share fitness goals and accomplishments with others. And the further isolation caused by COVID-19 boosted their numbers even more.

Strava reported that the community grew by 2 million new members each month in 2020. Also, the number of activities uploaded to the platform jumped by 33% to 1.1 billion in 2020. 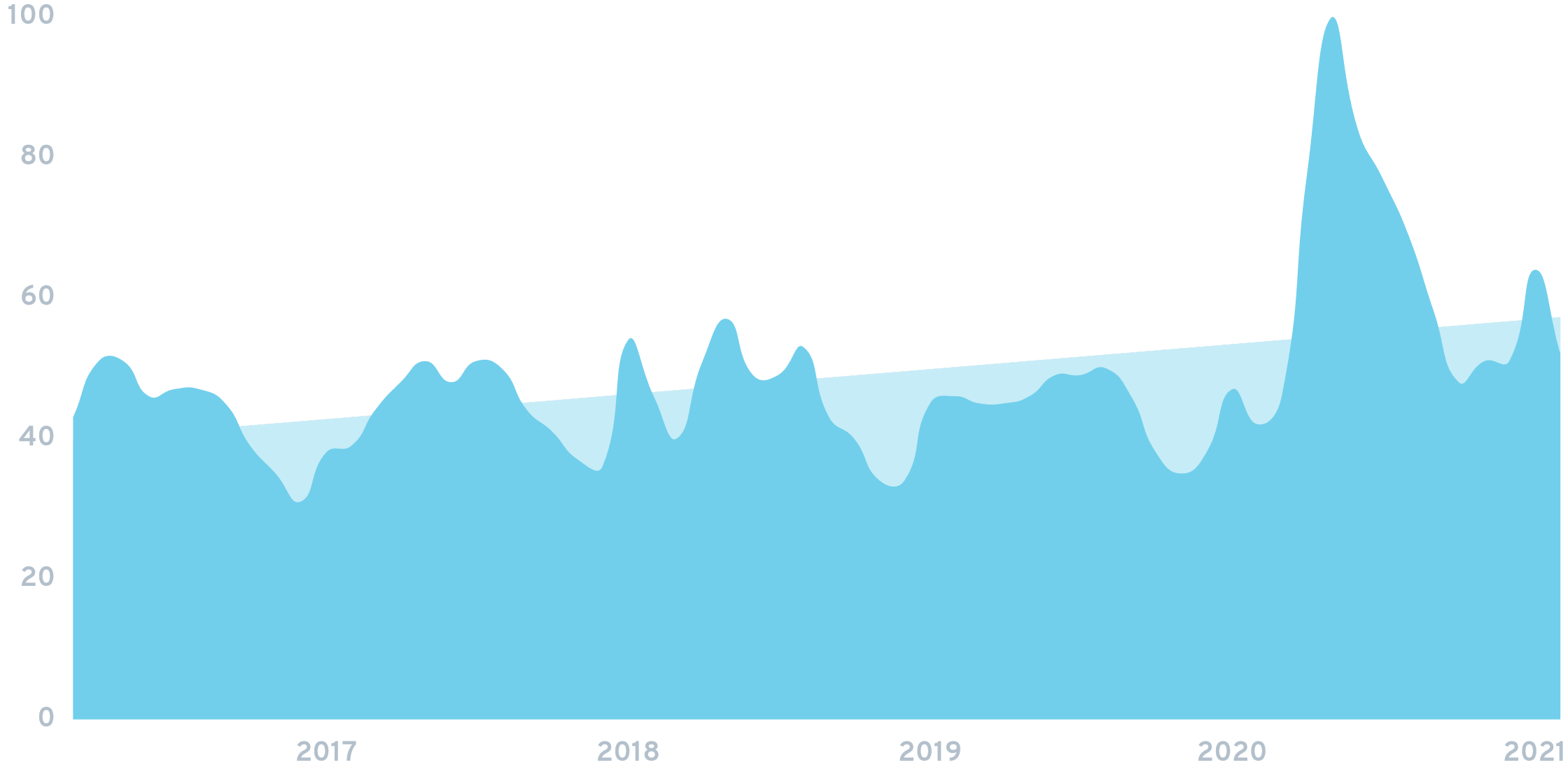 Runkeeper also saw registrations increase by 252% in 2020. And their monthly active user base is growing at a rate of 44%.

That’s all for the top cultural trends for 2021.

It’s obvious that digital innovation drove a lot of cultural change over the past few years.

So, more than anything else, expect emerging technology to drive cultural change in the future as well.