Each of these trends are already growing quickly. And are likely to continue their upward trajectory in 2021.

Without further ado, let’s take a peek into the future of ecommerce.

And this growth is reflected in interest in Shopify as a whole: searches for the brand are up 82% over the last two years. 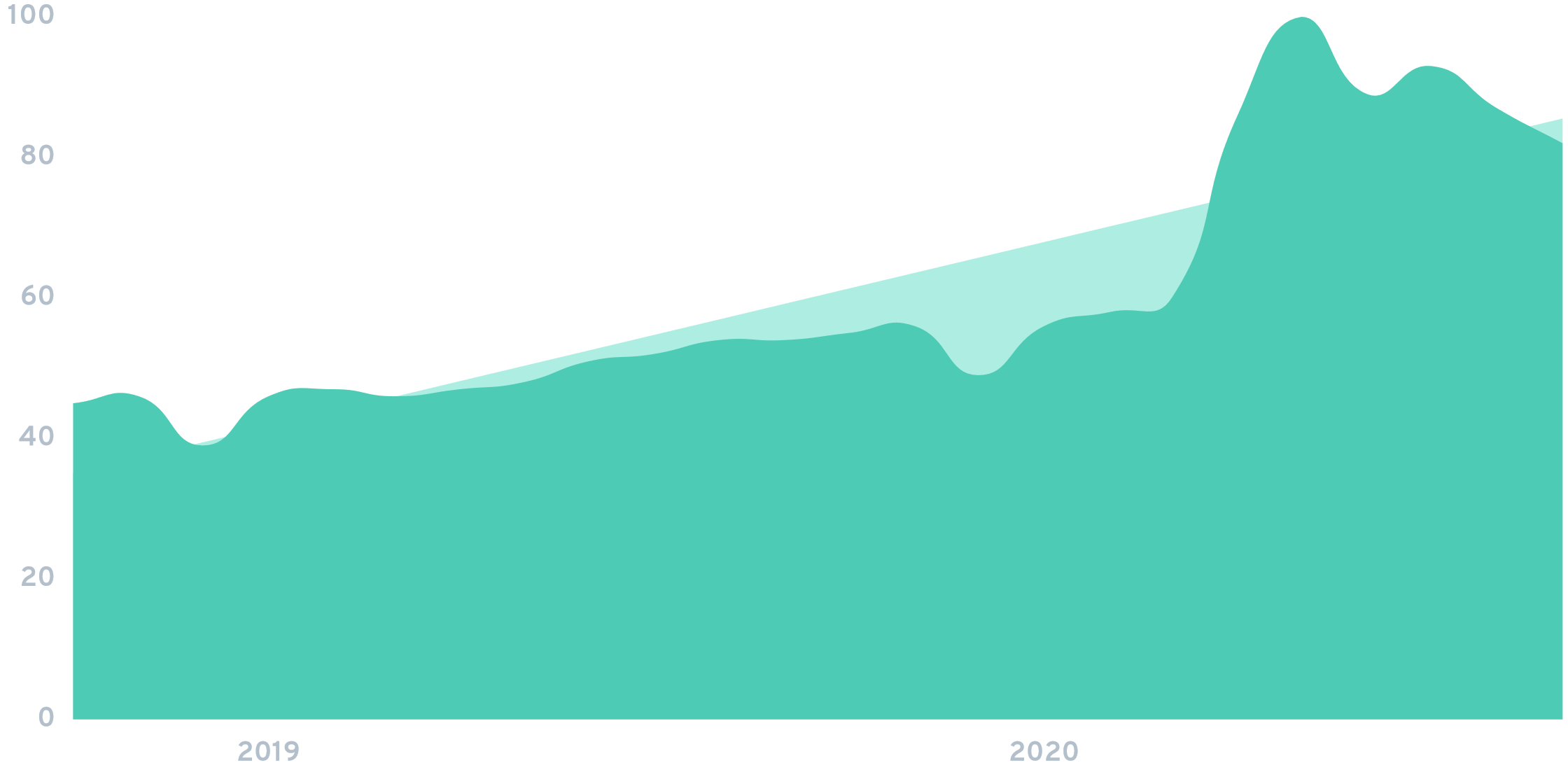 Search growth for “Shopify” over the last 24 month period.

And that doesn’t include online stores launched on other ecommerce platforms, like BigCommerce.

In fact, overall ecommerce sales are set to hit nearly $4 trillion this year. An all time high.

A good chunk of this increase is driven by major ecommerce players, like Amazon, Walmart and Chewy.

However, some of this growth is driven by relatively new ecommerce businesses, like Magic Spoon. 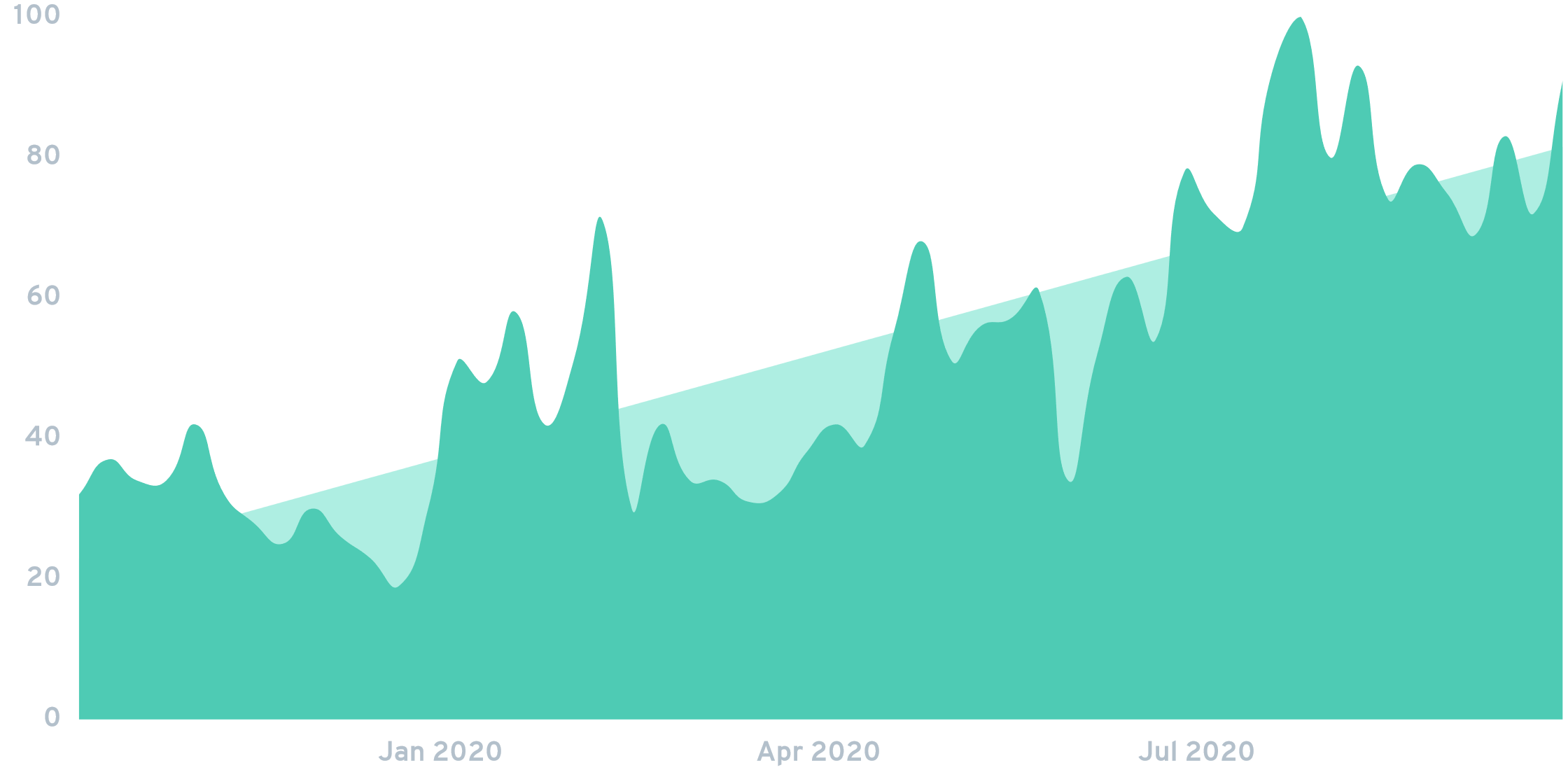 Searches for Magic Spoon have increased by 184% over the last 12 months.

Magic Spoon is grain-free breakfast cereal designed to be keto diet friendly. For example, their cocoa cereal contains 11g of protein and 3g of net carbs per serving.

Unlike essentially any other cereal brand, Magic Spoon doesn't sell offline. They're 100% direct-to-consumer.

Their price-point is also significantly higher than traditional cereal (a box of Magic Spoon costs about $10).

However, this hasn’t stopped Magic Spoon from getting $5.5M in a seed funding round from Lightspeed Venture Partners in 2019.

And the company reports “triple digit” sales growth during COVID as more people eat breakfast at home — and order staples like cereal online.

There’s also a growing number of brick and mortar stores getting into ecommerce for the first time. In fact, one UK-focused study found that 85,000 existing businesses launched ecommerce sites in 2020.

37% of US consumers have already used a “Buy Now, Pay Later” service, according to a report conducted by The Ascent.

And that number is growing 28% year-over-year.

Afterpay is one of the leading BNPL service providers. 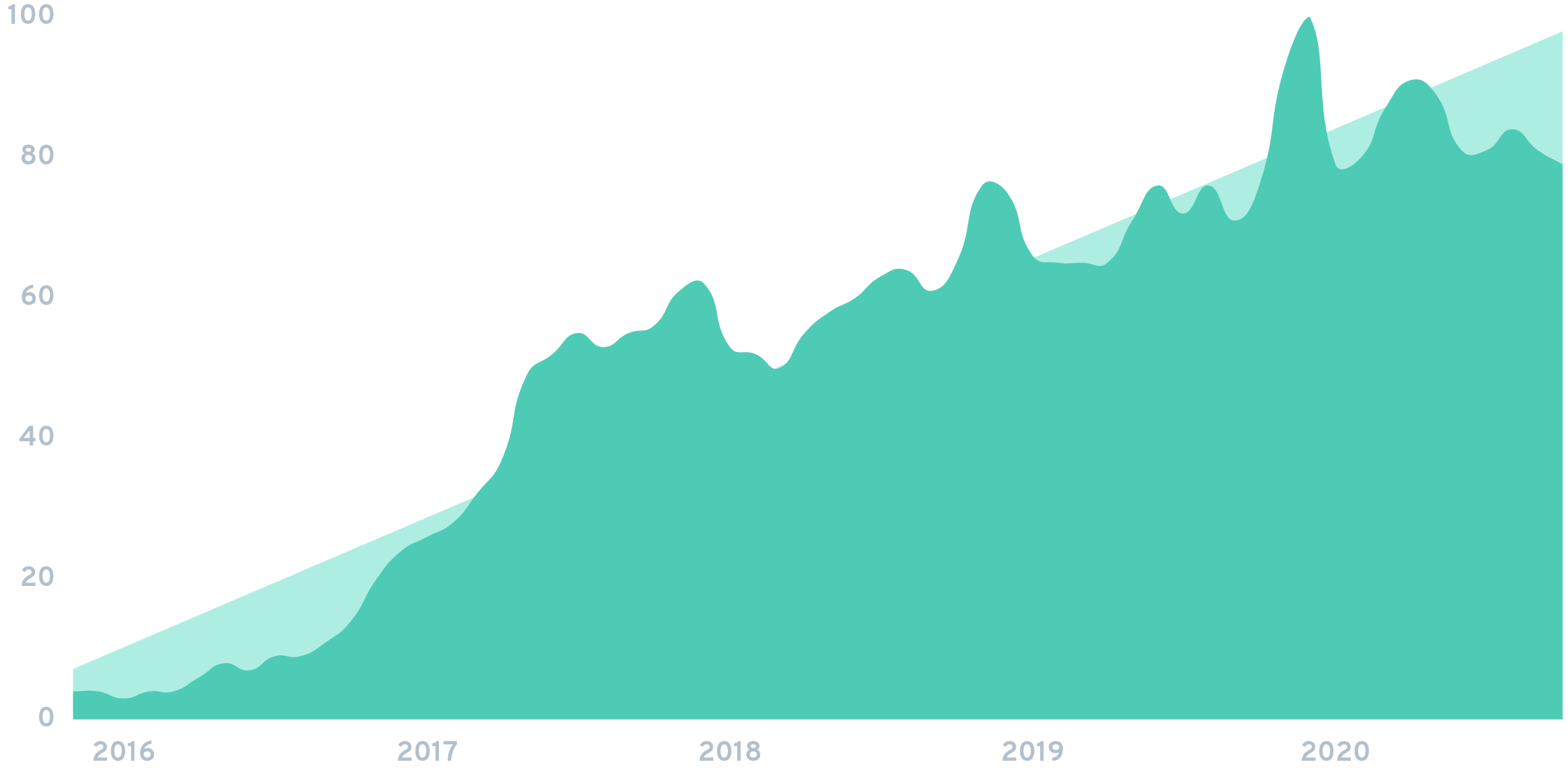 In fact, Afterpay recently hit the 10M user mark (with 5M of those users in the US).

Like most BNPL providers, Afterpay gives online shoppers the option to pay for their checkout in monthly installment payments instead of a lump sum.

Then, Afterpay pays the merchant at purchase. And they collect installment payments directly from the customer.

Although Afterpay was growing pre-crisis, the economic downturn has been a boon to their business. They report that their US customer numbers are growing by 40% weekly.

Afterpay is one of many growing services that help ecommerce stores offer BNPL payment options. PayPal’s Pay in 4 and Amazon Pay Later are two other growing BNPL providers.

52% of worldwide consumers have made a purchase using a mobile device.

However, point of purchase is only one part of the mobile shopping experience.

According to data from Google, 60% of consumers start and end their shopping experience on different devices. Another Google study found that in-store mobile searches are up 15%.

Which shows that people are increasingly using mobile devices throughout the buyer journey: from discovery, to research, to comparing options, and ultimately making purchases.

However, the real growth in this space is in the final step of the customer journey: making a purchase. Forbes reports that mobile holiday shopping is set to hit $314B. Another industry study estimates that 72.9% of online sales could come from mobile purchases by the end of 2021.

So it’s natural that social networks are now integrating buying experiences directly into their platforms.

This allows them to keep their audiences on the network longer, collect valuable transaction data, and charge significant fees.

For example, businesses pay Facebook 5% per shipment (with a $0.40 minimum) to use its new direct checkout features.

Facebook has offered social commerce in various forms for years.

But the company’s new features mark a stronger, unified push into social commerce. One that also includes not only Facebook and Instagram, but also Messenger and WhatsApp. 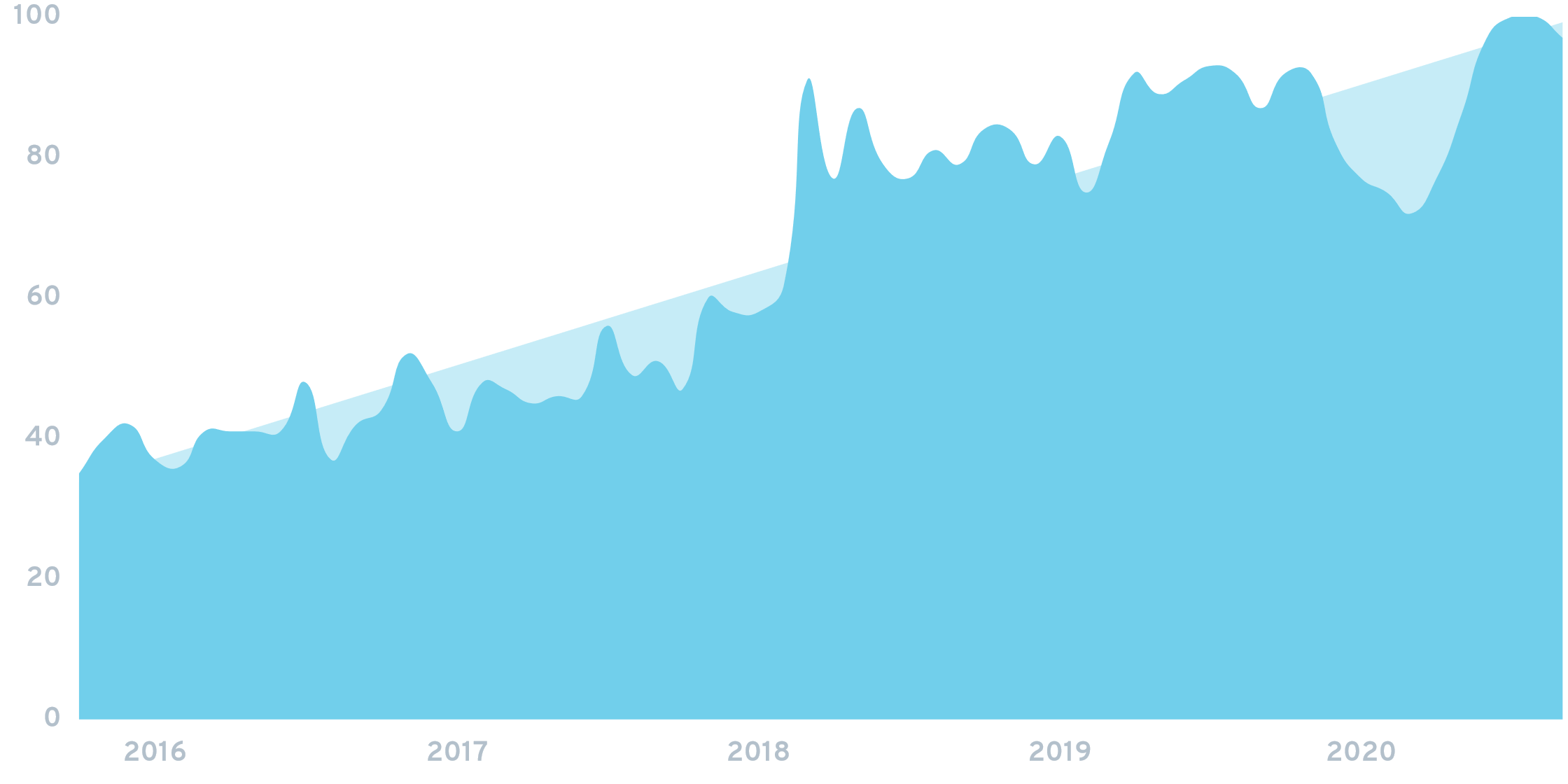 To pull this off, the company has partnered with Shopify (with a $125B market cap), BigCommerce (with a $6B market cap) and WooCommerce (which is owned by WordPress parent company Automattic).

Beyond Facebook, TikTok is partnering with Teespring to allow creators to sell merchandise directly to their followers.

Pinterest has had its eye on commerce since the early days of the platform’s launch. In fact, they started earning affiliate revenue very early on. But with the newer Pinterest Partners initiative, the company’s aim is to let people “shop for any item they see” on the network.

Snap is taking an AR (Augmented Reality) approach to social commerce starting this year. Snapchat has featured products via AR before. But their new “Shoppable AR” feature lets users buy items they like directly from the app.

The first campaign to use it was Gucci’s shoe “try-on” filter, launched in late June 2020.

To create the custom AR filter for it, Snap and Gucci partnered with AR commerce software, Wannaby.

Wannaby has also helped Gucci add virtual try-ons of its watches and shoes to the Gucci app.

Founded by former Google developer Sergey Arkhangelskiy in 2017, Wannaby bills itself as an “AR commerce company”. The Belarusian startup also has its own virtual try-on apps “Wanna Kicks” (for shoes) and “Wanna Nails” (for nail polish). 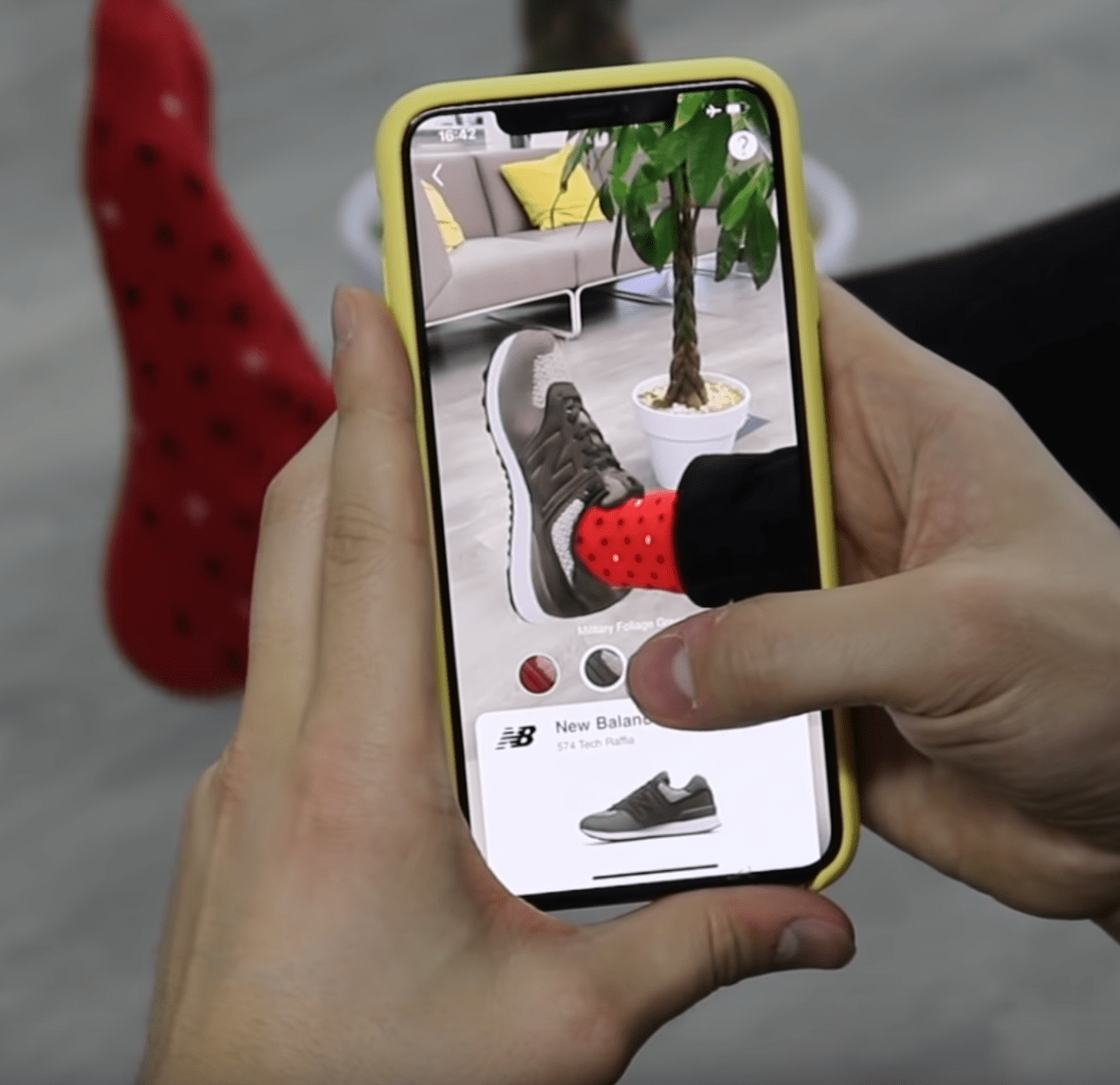 Other notable players in social commerce include:

China’s WeChat, which updated its “mini programs” in January to effectively create a massive online marketplace.

Russia’s VK Market, which allows users of VK (the country’s largest social network) to shop on AliExpress without leaving the site.

And Tribe, a Canadian SaaS for adding a community component to existing sites. (One of its customers is Decathlon, the world’s largest sporting goods retailer.)

Live video shopping is another important emerging ecommerce trend to keep an eye on.

Live video shopping is where products are shown off and sold in a live video stream. (Like the Home Shopping Network, but for online shopping.)

In the western world, live video shopping is just getting started. But in China last year, it was already a $66 billion market. And that number is forecasted to nearly triple to $170 billion this year.

Examples of live video shopping companies and platforms include:

Alibaba’s Taobao Live, which made $2.85B in just one day last year. 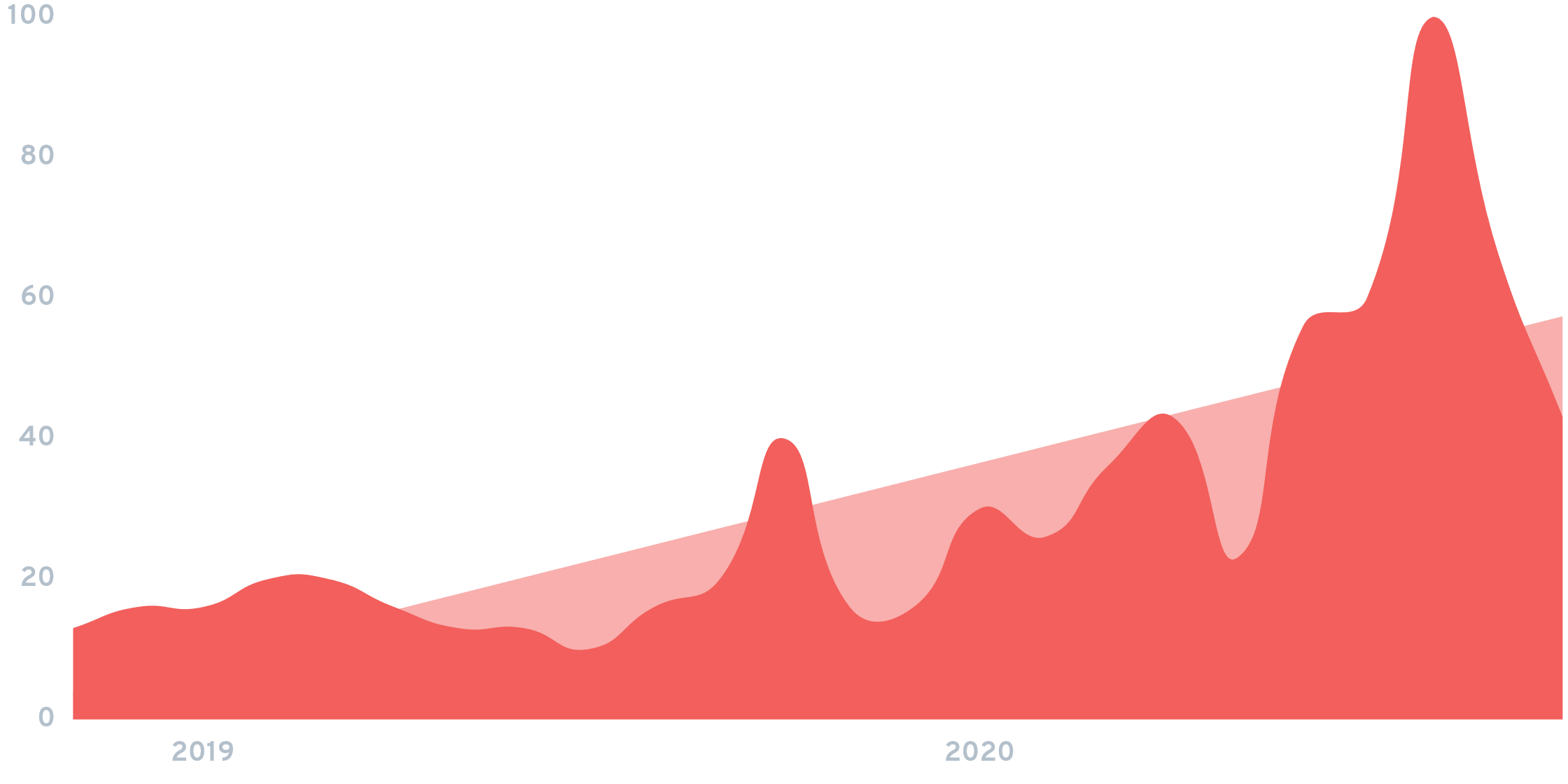 Google searchers for Bambuser have grown rapidly since the company pivoted last year. 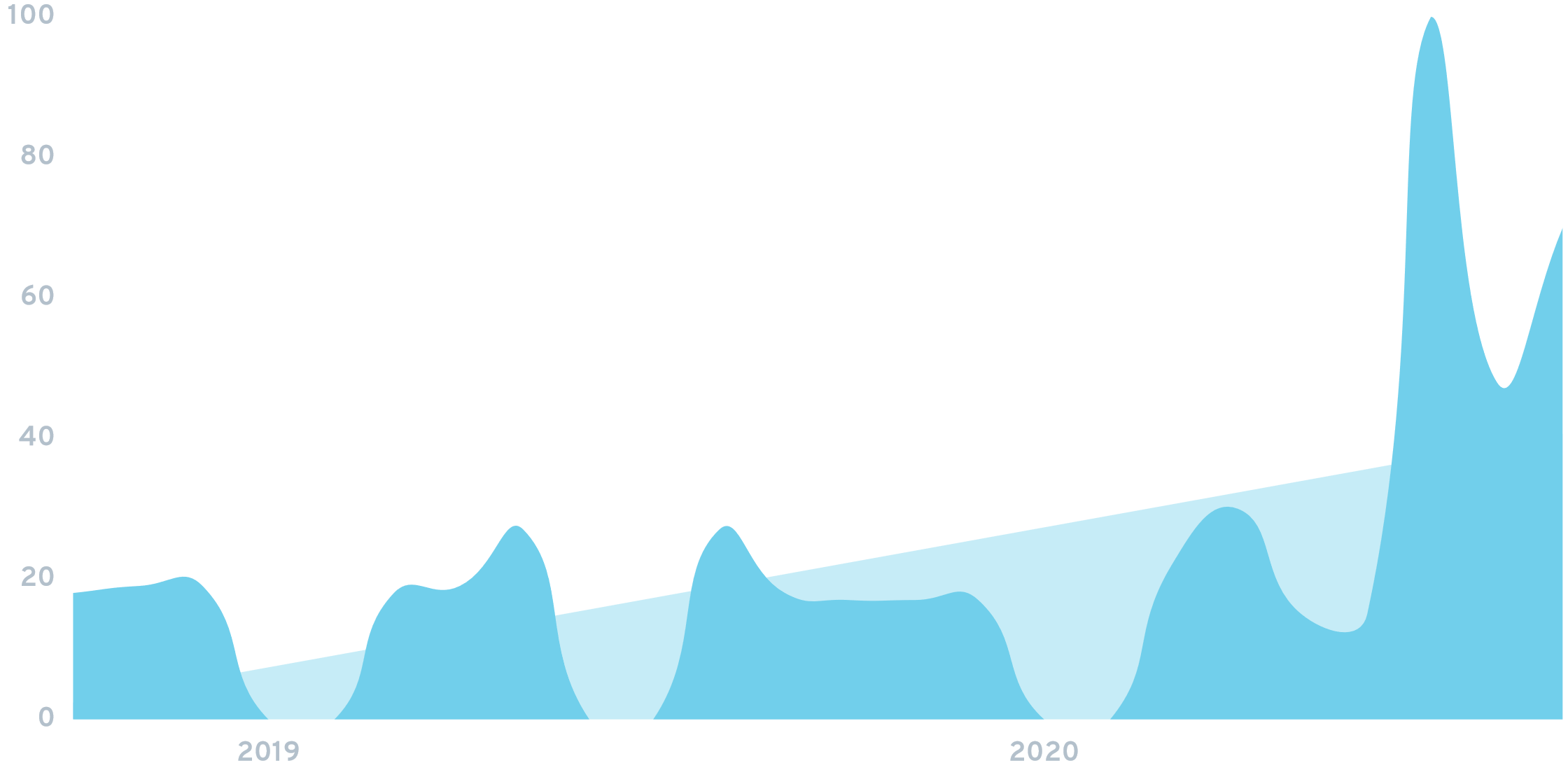 According to data from Facebook, 68% percent of Gen Z consumers “expect brands to contribute to society”. And 61% state that they’d pay more for a product if it was manufactured in an “ethical and sustainable way”.

But Gen Z isn’t the only demographic on the lookout for sustainable products.

A large-scale study by Nielson discovered that sustainable products across all categories have higher rates of growth.

(Compared to non-sustainable products in the same category) 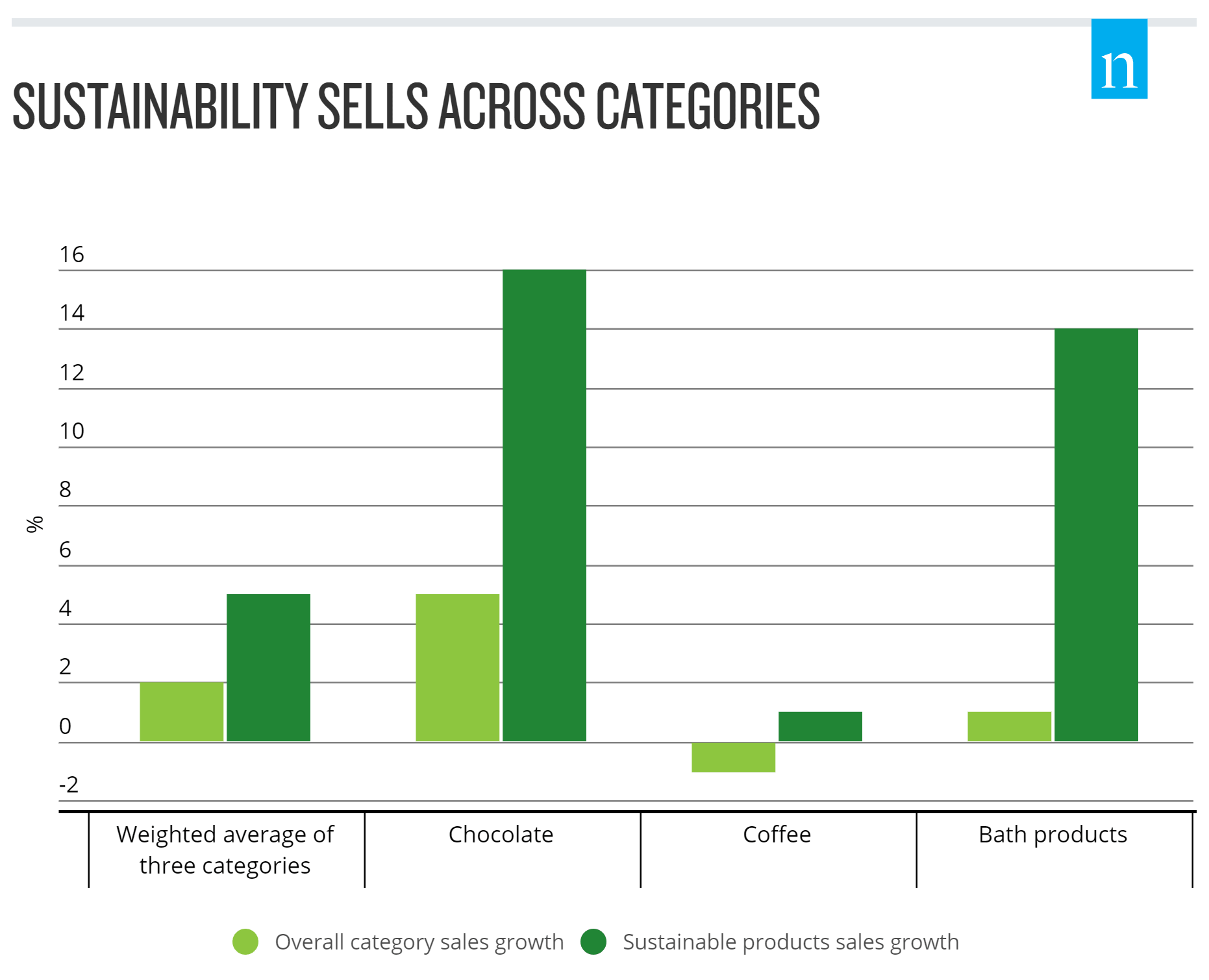 Pura is a great example of a growing, sustainable ecommerce brand. 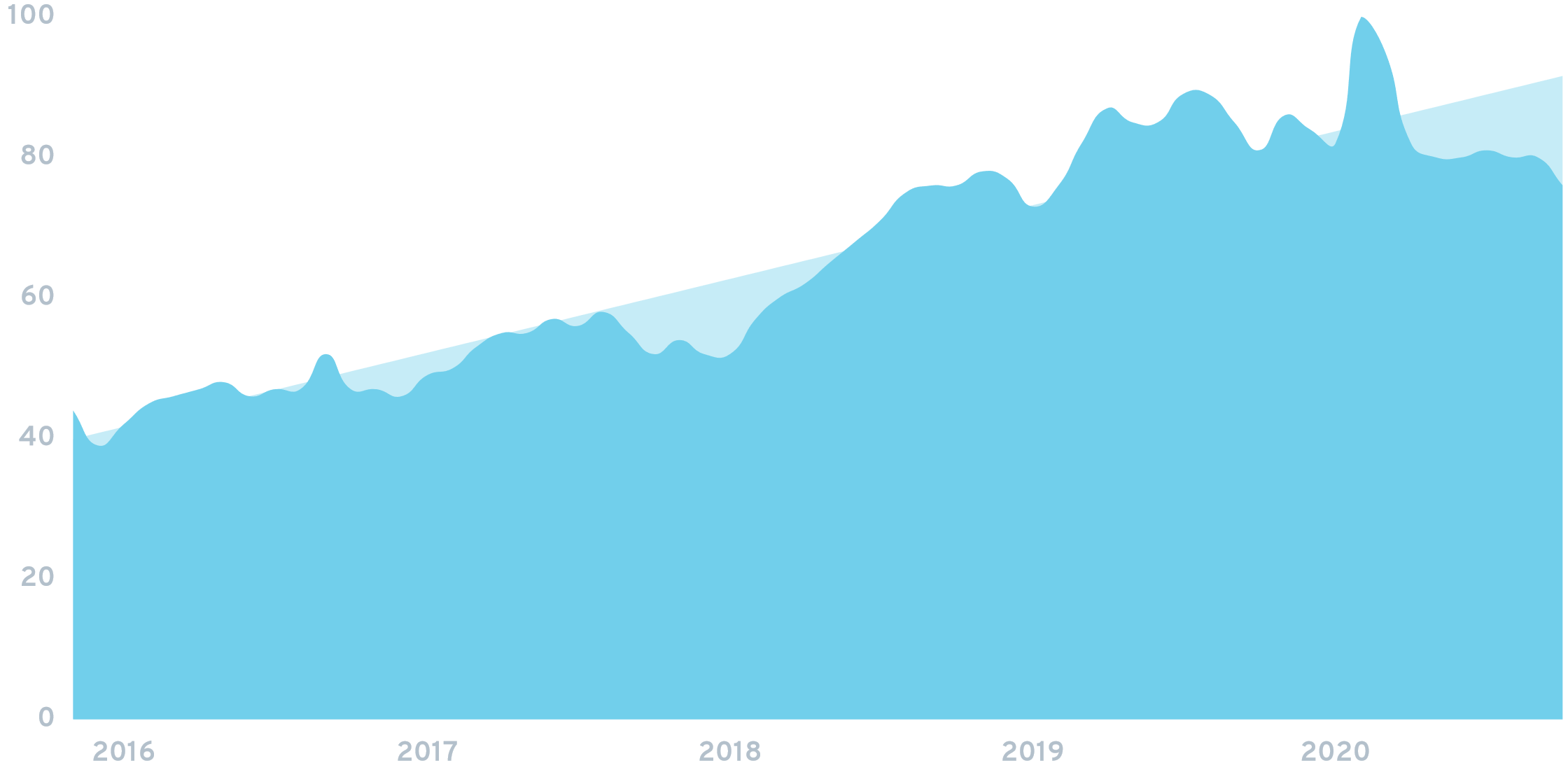 Searches for “Pura” over the last 5 years. 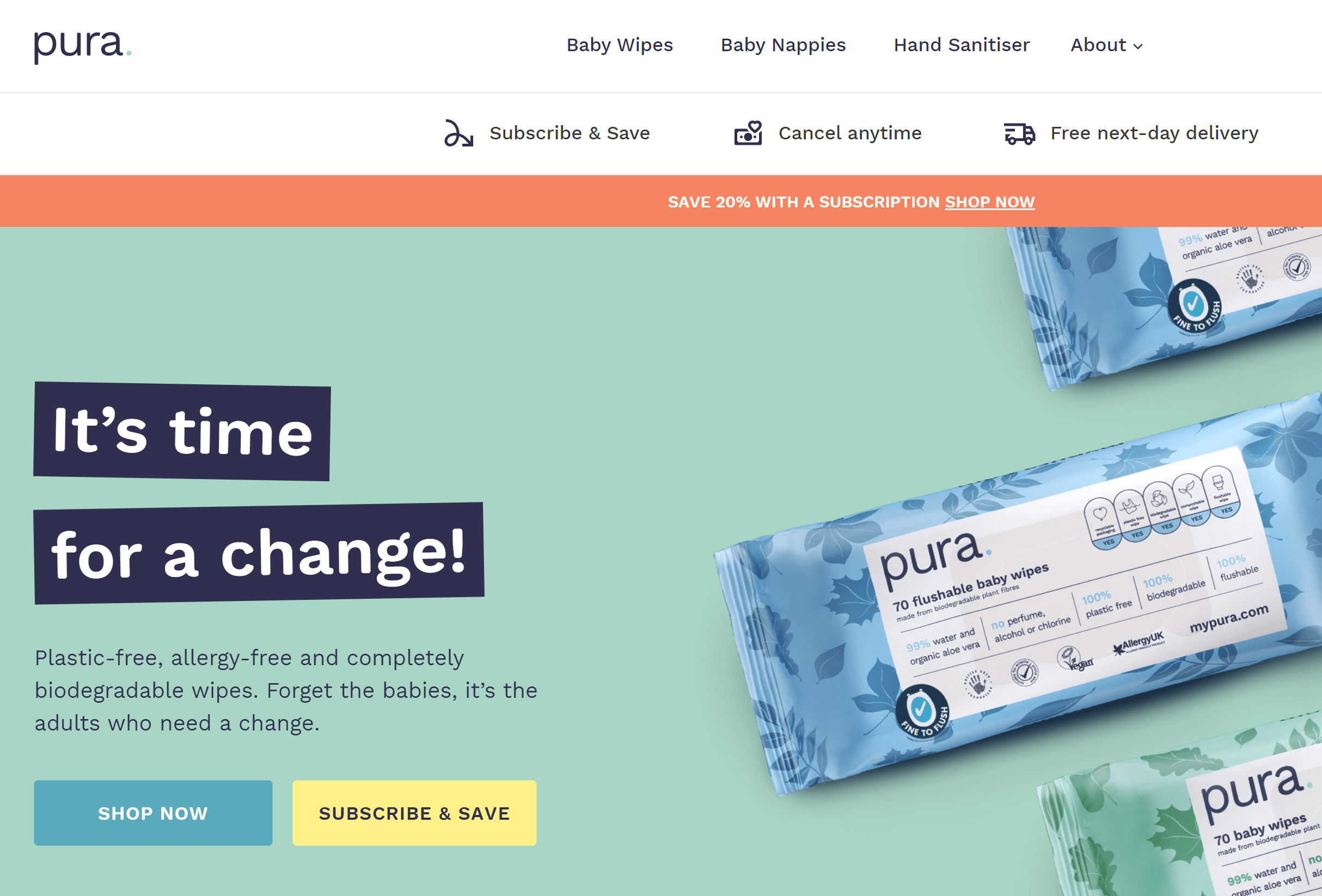 According to the founders, they generated 22,000 orders within weeks of launch.

Ecommerce sites that adopt chatbots have seen revenues increase by upwards of 25%.

And HubSpot reports that 4 out of 10 consumers don’t care whether they chat with a human or bot. As long as their problem gets resolved, they consider it a positive customer experience.

Which is why many ecommerce businesses are shifting their support systems to be “chat first”. This approach usually combines AI-powered chatbots with human live chat.

For example, Serenelife uses a chatbot that can be transferred into traditional live chat when needed. 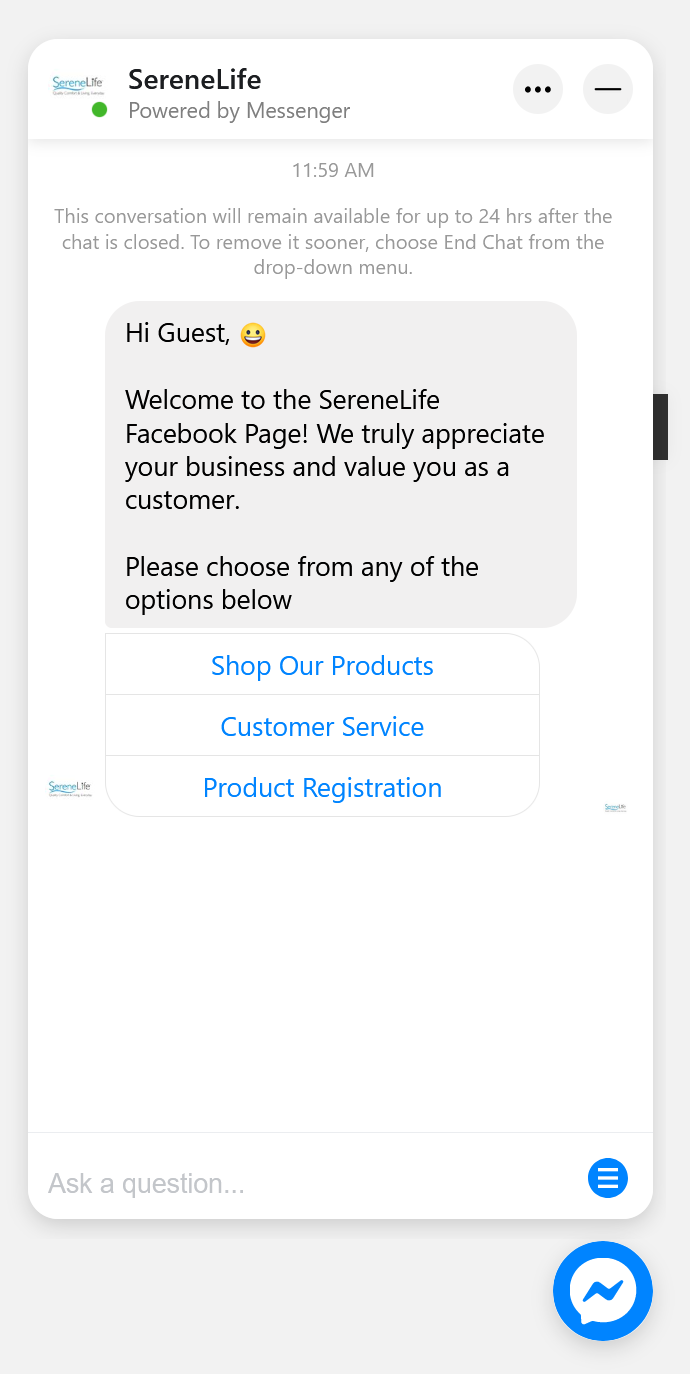 Example of a chatbot being used on an ecommerce website.

With growing demand, there are now a number of chatbots hitting the market, including Manchat, AhaChat, and MobileMonkey.

One of the fastest-growing chatbot SaaS tools is Landbot. 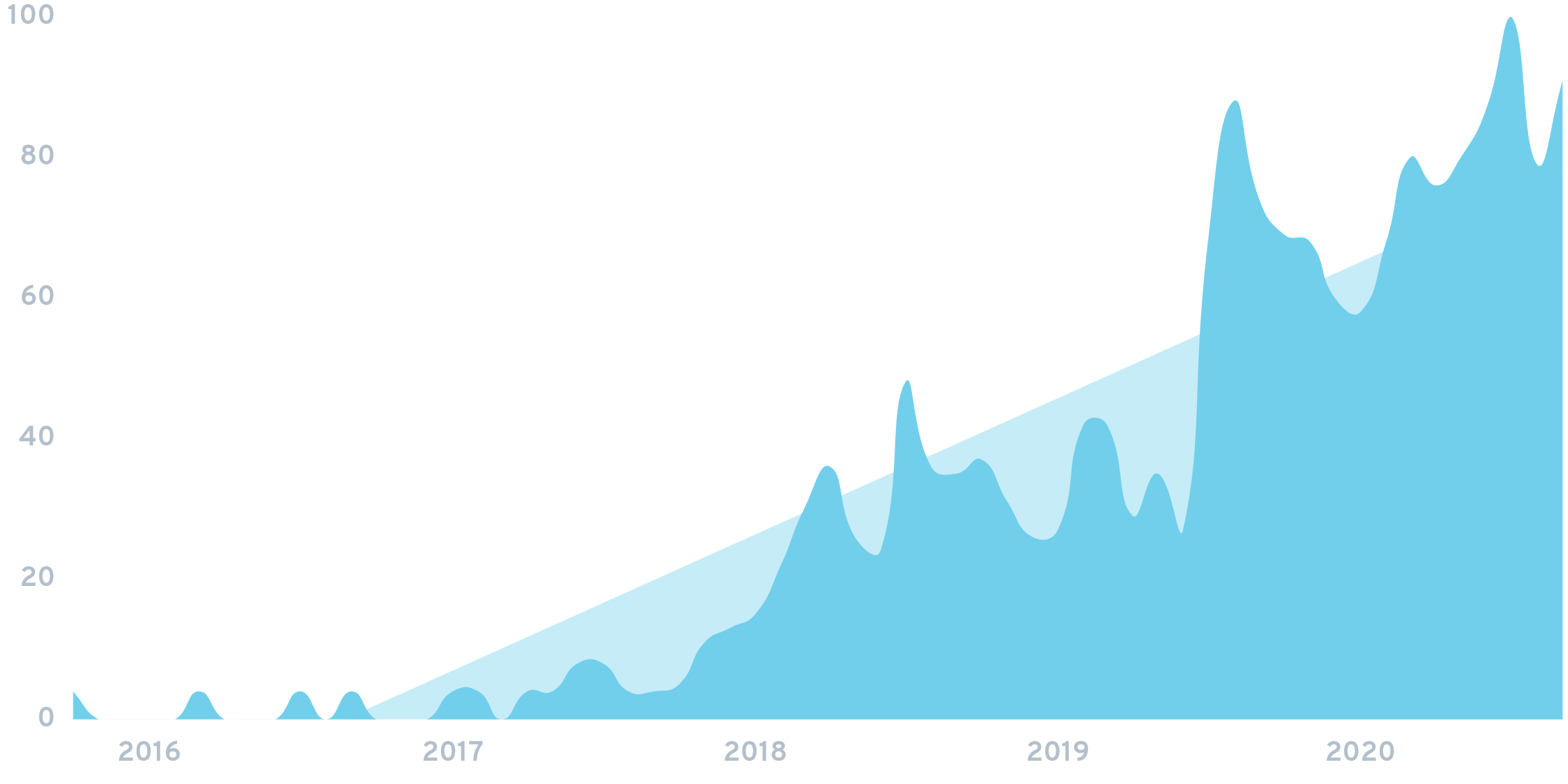 Search growth for Landbot since 2016.

How did Landbot stand out among the thousands of chatbots already out there? And achieve significant growth in a highly competitive space?

They decided to not incorporate AI into their software.

Most chatbots boast about “advanced AI features”. But Landbot decided to use a simple “choose your own adventure” approach instead.

While not as advanced, the founders claim that “dumb chatbots” are easier for non-tech savvy marketers to set up and manage.

37% of ecommerce brands already work with social media influencers, according to a 2020 survey of 160 global ecommerce businesses.

And influencer platform Upfluence, recently announced a partnership with Shopify.

Which shows that influencer marketing will likely remain a key channel for ecommerce businesses in 2021.

However, the way ecommerce brands approach influencer marketing is starting to shift. 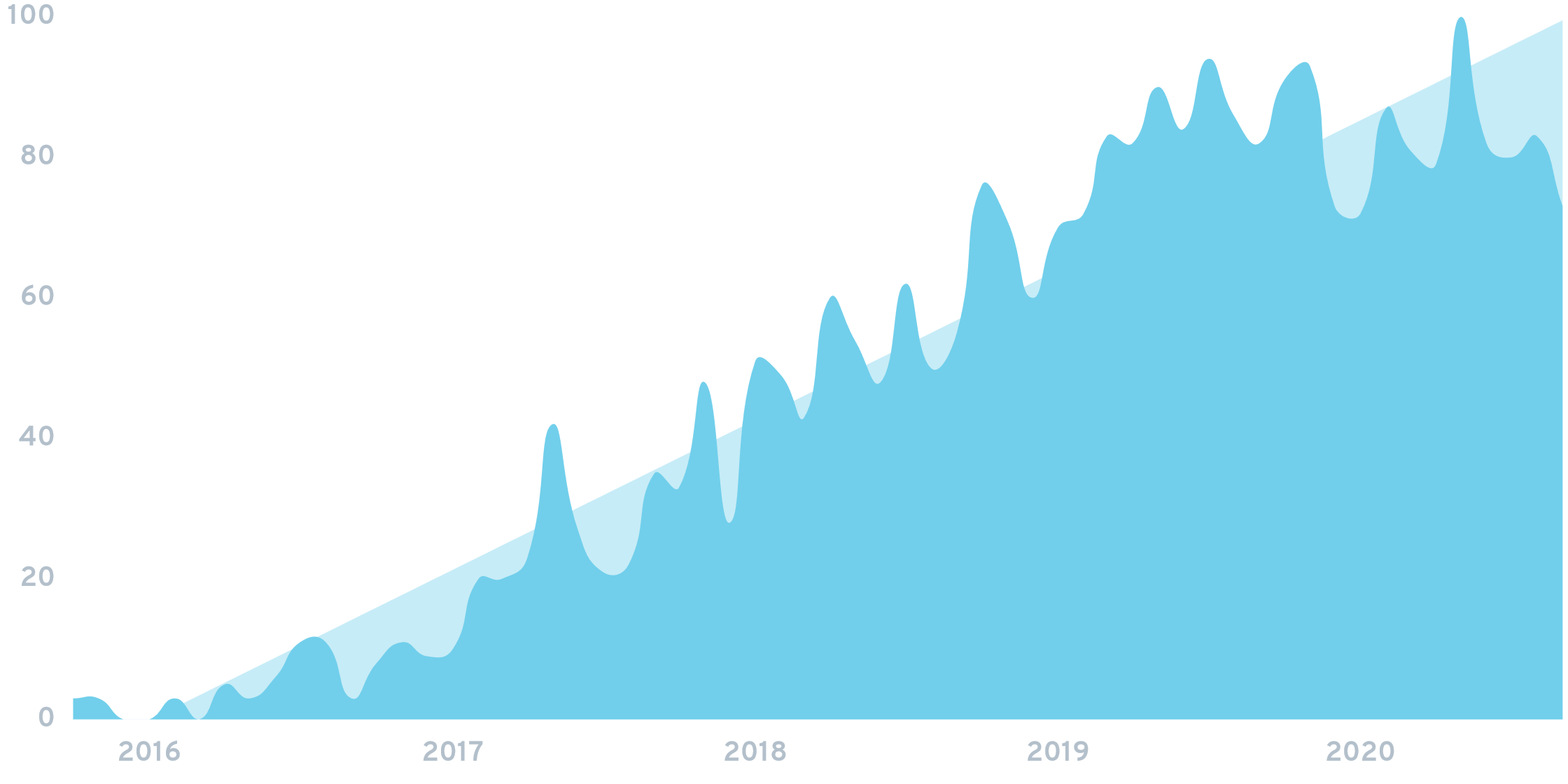 Searches for “micro influencers” have increased by 200%+ over 5 years.

Micro influencers are accounts with fewer than 10,000 followers on an indiviual social media platform. And according to research by InfluencerDB, micro influencers have significantly higher levels of engagement compared to larger accounts.

A study by BCG discovered that personalization can lead to 6-10% faster sales growth for online retailers.

In short, AI and machine learning is taking the “personalized homepage” of Netflix to ecommerce. This is known as “proactive product recommendations”. However, a personalized website that adapts to past purchases is just one of many ways that AI can boost revenue for ecommerce businesses.

In fact, that technology is nothing new (Amazon has personalized their homepage for years).

Other use cases for AI in ecommerce include:

In fact, McKinsey & Company found that AI has the potential to improve analytics in the retail space by 87%. 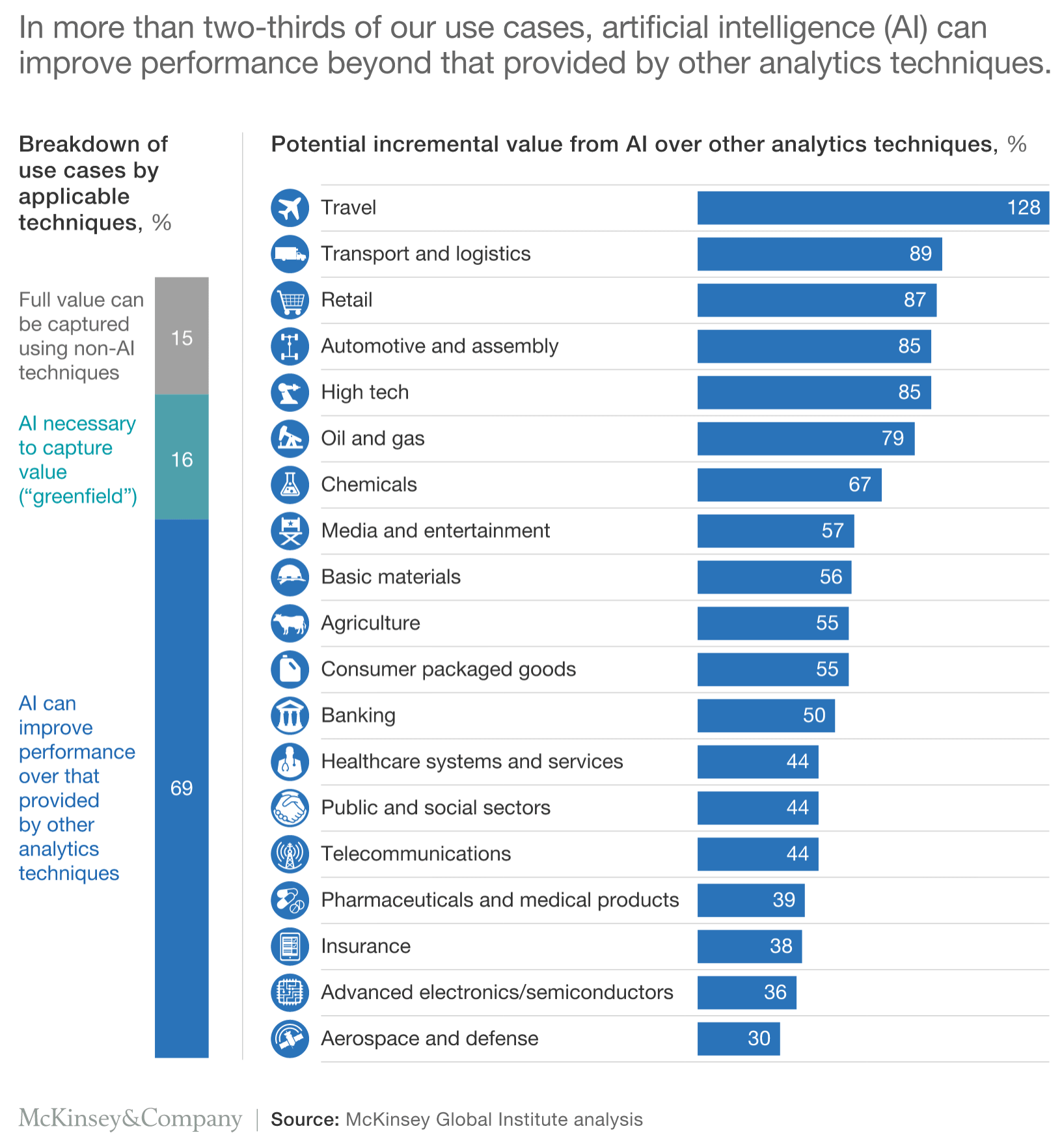 AI can outperform non-AI analytics approaches in many industries (including retail).

There are approximately 2-3M ecommerce sites around the world (not counting those in China).

Many of which sell niche products to a relatively small, passionate audience.

ThirdLove is a great example of this trend.

They offer bras in half-cup sizes, which they claim fit better for up to 50% of women. Filling that demand (and offering an innovative “Fit Finder” app) have propelled the brand to a valuation of over $750M.

Because they’re focused on DTC, ThirdLive can offer more variety, customization, and personalization than a retail fashion brand.

Bare Necessities is another example of an ecommerce brand that sells “long tail” products with relatively niche appeal. Rather than the typical 30 bra sizes, Bare Necessities offers over 160.

Mom jeans are a product that may not appeal to the masses. But it’s found significant growth online. 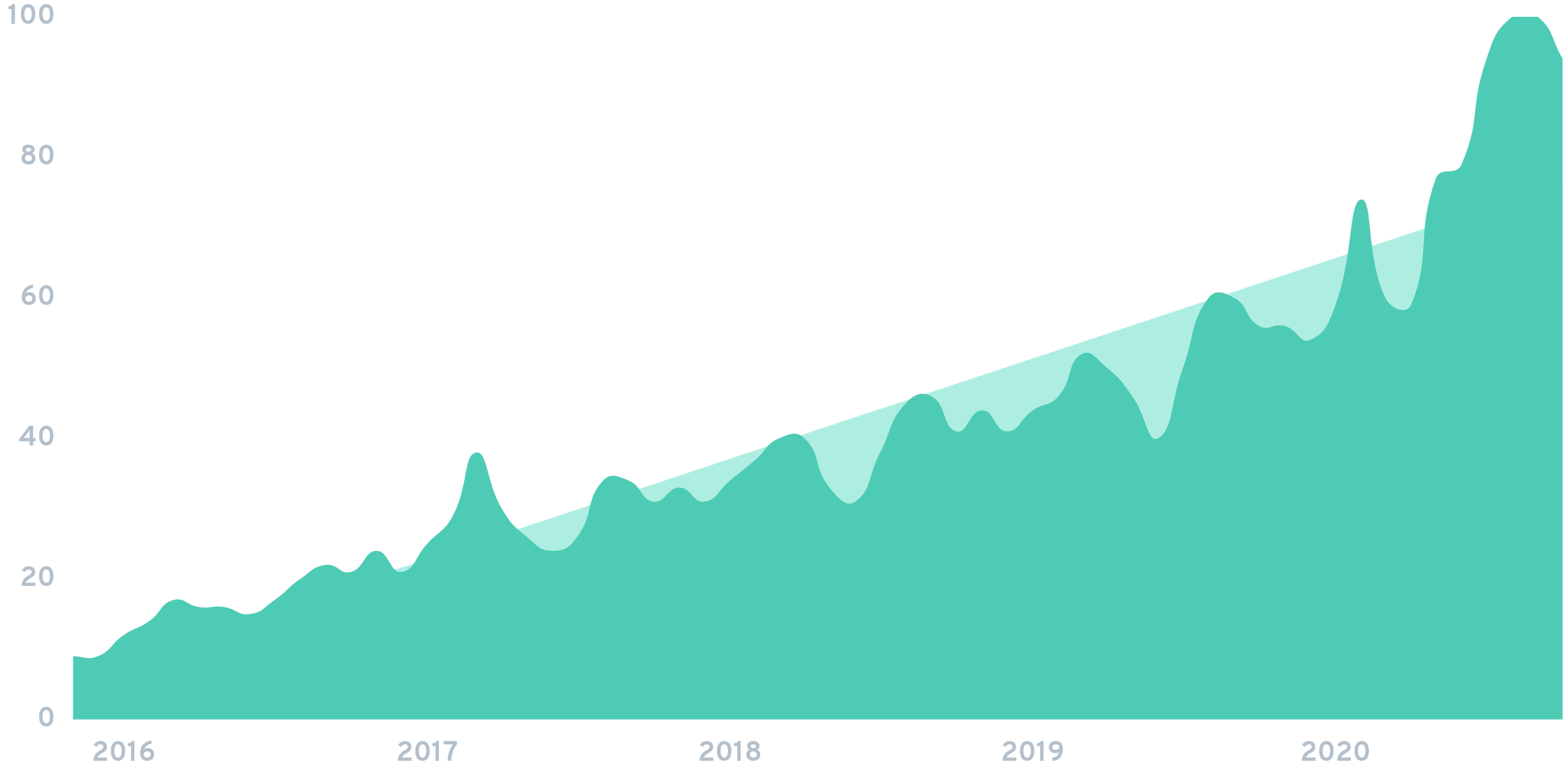 Searches for “mom jeans” have doubled over the last 2 years.

Mom jeans are high-waist, baggy-fit jeans that were popular in the mid to late 90s.

The term “mom jeans” was originally a derogatory term popularized by a viral 2003 SNL sketch. But in recent months, mom jeans have become highly fashionable.

In fact, many Instagram fashion influencers proudly sport mom jeans in their photos. And mom jeans are some of the most in-demand product categories on fashion ecommerce stores.

That concludes our list of 10 trends shaking up the ecommerce industry in 2021.

From AI to social commerce, the ecommerce space is growing fast. And changing just as quickly.

And if you’d like to learn about more growing trends, check out our post on important CPG trends. 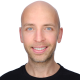